From Infogalactic: the planetary knowledge core
Jump to: navigation, search
File:Pensacola Bay Bridge Ice.jpg
Ice and snow as seen from an FDOT camera on the Bay Bridge in Pensacola, Florida following a winter storm on 28–29 January 2014. Much of the Panhandle experienced significant ice buildup (from freezing rain & sleet) followed by a light snowfall.

It is rare for snow to fall in the U.S. state of Florida (and surrounding area's) because freezing temperatures in Florida are generally caused by the cold weather and dry winds of anticyclones. Frost is more common than snow, requiring temperatures of 45 °F (7 °C) or less at 2 m (7 ft) above sea level, a cloudless sky, and a relative humidity of 65% or more.[1] In the general case, for snow to occur, the polar jet stream must move southward through Texas and into the Gulf of Mexico, with a stalled cold front across the southern portion of the state curving northeastward to combine freezing air into the frontal clouds.[2] While light snowfall occurs every few years across the northern panhandle and the north central peninsula, most of the state is in a rare portion of the continental United States that receives a mean maximum monthly snowfall amount of zero, the only other such areas being southern Texas and parts of California.[3]

Much of the known information on snow in Florida prior to 1900 is from weather climatology provided by the Jacksonville National Weather Service; for this reason, information for other locations is sparse.[1] The earliest recorded instance of snow in Florida was a snowstorm that occurred in 1774; being unaccustomed to snow, some Jacksonville residents called it "extraordinary white rain."[1] The first White Christmas in northeastern Florida's history resulted from a snowfall that occurred on December 23, 1989.[4]

Due to increased populations and advanced communication networks, snow events are witnessed and reported more frequently in recent years. This should not be interpreted as a pattern of actual occurrence. 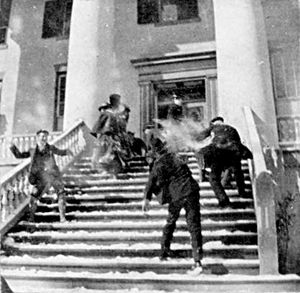 Snowball fight on the steps of the Florida Capitol, February 1899