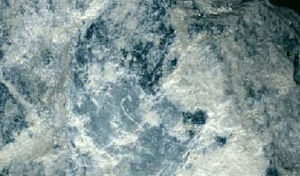 Steatite in its raw mineral form

Soapstone (also known as steatite, or soaprock) is a talc-schist., which is a type of metamorphic rock. It is largely composed of the mineral talc and is thus rich in magnesium. It is produced by dynamothermal metamorphism and metasomatism, which occurs in the areas where tectonic plates are subducted, changing rocks by heat and pressure, with influx of fluids, but without melting. It has been a medium for carving for thousands of years. 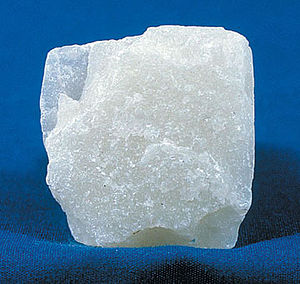 A block of talc

Petrologically, soapstone is composed dominantly of talc, with varying amounts of chlorite and amphiboles (typically tremolite, anthophyllite, and cummingtonite, obsolete name: magnesiocummingtonite), and trace to minor FeCr-oxides. It may be schistose or massive. Soapstone is formed by the metamorphism of ultramafic protoliths (e.g. dunite or serpentinite) and the metasomatism of siliceous dolostones.

Pyrophyllite, a mineral very similar to talc, is sometimes called soapstone in the generic sense since its physical characteristics and industrial uses are similar,[citation needed] and because it is also commonly used as a carving material. However, this mineral typically does not have such a soapy feel as soapstone.

Soapstone is relatively soft because of its high talc content, talc having a definitional value of 1 on the Mohs hardness scale. Softer grades may feel soapy when touched, hence the name. There is no fixed hardness for soapstone because the amount of talc it contains varies widely, from as little as 30% for architectural grades such as those used on countertops, to as much as 80% for carving grades. Common, non-architectural grades of soapstone can just barely be scratched with a fingernail and are thus considered to have a hardness of 2.5 on the Mohs scale.[1] If a candidate rock cannot be scratched with a knife blade (hardness of 5.5), it is not soapstone.

Soapstone is often used as an insulator or housing for electrical components, due to its durability and electrical characteristics and because it can be pressed into complex shapes before firing. Soapstone undergoes transformations when heated to temperatures of 1000–1200 °C into enstatite and cristobalite; in the Mohs scale, this corresponds to an increase in hardness to 5.5–6.5.[2]

Soapstone is used for inlaid designs, sculpture, coasters, and kitchen countertops and sinks. The Inuit often use soapstone for traditional carvings. Some Native American tribes and bands make bowls, cooking slabs, and other objects from soapstone; historically, this was particularly common during the Late Archaic archaeological period.[3]

Locally quarried soapstone was used for gravemarkers in 19th century northeast Georgia, USA, around Dahlonega, and Cleveland, as simple field stone and "slot and tab" tombs.

Vikings hewed soapstone directly from the stone face, shaped it into cooking-pots, and sold these at home and abroad.[4]

Soapstone is sometimes used for construction of fireplace surrounds, cladding on metal woodstoves, and as the preferred material for woodburning masonry heaters because it can absorb, store and evenly radiate heat due to its high density and magnesite (MgCO3) content. It is also used for counter tops and bathroom tiling because of the ease of working the material and its property as the "quiet stone." A weathered or aged appearance will occur naturally over time as the patina is enhanced. Applying mineral oil simply darkens the appearance of the stone; it does not protect it in any way.[citation needed]

Tepe Yahya, an ancient trading city in southeastern Iran, was a center for the production and distribution of soapstone in the 5th–3rd millennia BC.[5] It was also used in Minoan Crete. At the Palace of Knossos, archaeological recovery has included a magnificent libation table made of steatite.[6] The Yoruba of West Nigeria utilized soapstone for several statues most notably at Esie where archaeologists have uncovered hundreds of male and female statues, about half of life size. The Yoruba of Ife also produced a miniature soapstone obelisk with metal studs called superstitiously "the staff of Oranmiyan" 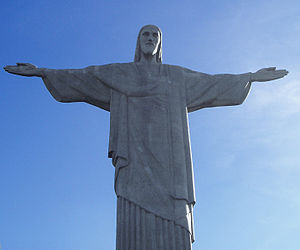 The outer layers of the Christ the Redeemer sculpture in Rio de Janeiro are made of soapstone.

Soapstone has been used in India for centuries as a medium for carving. Mining to meet world-wide demand for soapstone is threatening the habitat of India's tigers.[7]

In Brazil, especially in Minas Gerais, due to the abundance of soapstone mines in that Brazilian state, local artisans still craft objects from that material, including pots and pans, wine glasses, statues, jewel boxes, coasters, vases. These handicrafts are commonly sold in street markets found in cities across the state. Some of the oldest towns, notably Congonhas, Tiradentes and Ouro Preto, still have some of their streets paved with soapstone from colonial times.

Some Native Americans use soapstone for smoking pipes; numerous examples have been found among artifacts of different cultures and are still in use today. Its lack of heat conduction allows for prolonged smoking without the pipe's heating up uncomfortably.[8]

Some premium wood fired heating stoves are made of soapstone to take advantage of its useful thermal and fire resistant properties.

Currently, soapstone is most commonly used for architectural applications, such as counter tops and interior surfacing. There is currently only one active North American soapstone mine. That mine is found in Central Virginia and is operated by the Alberene Soapstone Company. All other architectural soapstone is mined in Brazil, India and Finland and imported into the United States.[9]

Welders and fabricators use soapstone as a marker due to its resistance to heat; it remains visible when heat is applied. It has also been used for many years by seamstresses, carpenters, and other craftsmen as a marking tool because its marks are visible and not permanent.

Soapstone can be used to create molds for casting objects from soft metals, such as pewter or silver. The soft stone is easily carved and is not degraded by heating. The slick surface of soapstone allows the finished object to be easily removed.

Soapstones can be put in a freezer and later used in place of ice cubes to chill alcoholic beverages without diluting. Sometimes called 'whiskey stones', these were first introduced around 2007. Most whiskey stones feature a semi-polished finish, retaining the soft look of natural soapstone, while others are highly polished.

Steatite ceramics are low-cost biaxial porcelains of nominal composition (MgO)3(SiO2)4.[10] By mass, steatite is approximately 67% silica and 33% magnesia, and may contain minor quantities of other oxides such as CaO or Al2O3. Steatite is used primarily for its dielectric and thermal insulating properties in applications such as tile, substrates, washers, bushings, beads and pigments.[11]

People can be exposed to soapstone in the workplace by breathing it in, skin contact, or eye contact. The Occupational Safety and Health Administration (OSHA) has set the legal limit (Permissible exposure limit) for soapstone exposure in the workplace as 20 mppcf over an 8-hour workday. The National Institute for Occupational Safety and Health (NIOSH) has set a Recommended exposure limit (REL) of 6 mg/m3 total exposure and 3 mg/m3 respiratory exposure over an 8-hour workday. At levels of 3000 mg/m3, soapstone is immediately dangerous to life and health.[12]