From Infogalactic: the planetary knowledge core
Jump to: navigation, search
For other uses, see Soave (disambiguation).

Soave is a small comune of the Veneto region in the Province of Verona, northern Italy, with a population of roughly 6,800 people.

Soave is located approximately 23 kilometres (14 miles) east of Verona and is reachable by use of the A4 motorway exit Soave-San Bonifacio.

Soave was a Roman center on the via Postumia that connected Aquileia to Genoa. There are different names about the origin of current name: according to one theory, it could derive from the Suebi (sometimes called Soavi in medieval Italian).

The castle was cited for the first time in occasion of the Magyar invasions (934). In the 13th century it was a possession of the Counts Bonifacio, which installed a capitano here. The walls still visible today, were built in 1379 by Cansignorio of the Scaliger family. Their rule was followed by those of the Visconti from Milan and the Carraresi from Padua; the latter lost Soave in 1405 to the Republic of Venice. In 1439 Visconti troops under Niccolò Piccinino captured it back, but Venice regained it soon. During the War of the League of Cambrai (1508), the city was fired and 366 Soavesi killed, but again in 1515 it was reacquired by Venice, which later sold the castle to the Gritti noble family.

In 1797-1805 the city was under French rule. In 1809 there were small fights between French and Austrian troops in the vicinity. Later Soave was included in the kingdom of Lombardy-Venetia, and in 1866 became part of Italy.

The Castle of Soave is a typical medieval military edifice, commanding the neighbourhood of the city from the Tenda Hill. It comprises a mastio (donjon) and three lines of walls forming three courts of different size. The outer line, with a gate and a draw bridge, is the most recent, built by the Venetians in the 15th century. It houses the remains of a small church from the 10th century. 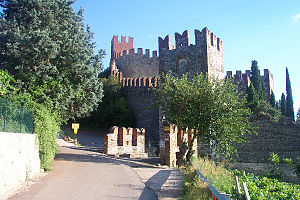 View of the Castle of Soave.

The second and larger court, the first of the original castle, is called della Madonna for a fresco portraying St. Mary (1321). Another fresco is visible after the door leading to the inner court, and portrays a Scaliger soldier. The mastio is the most impressive feature of the castle. Bones found within showed it was used also as prison and place of torture. The House called del Capitano (the Scaliger commander) houses Roman coins, weapons parts, medals and other ancient remains found during the most recent restoration. Adjacent is a bedroom with a 13th-century fresco with St. Mary and Madeleine and a dining room with medieval kitchenware. Another room houses the portraits of the most famous Scaliger figures: Mastino I, Cangrande, Cansignorio and Taddea da Carrara, wife of Mastino II; the portrait of Dante Alighieri testify an alleged sojourn of the poet in the castle.

Soave is twinned with: