The Social Democratic Party of Finland (Finnish: Suomen Sosialidemokraattinen Puolue, SDP, colloquially demarit; Swedish: Finlands Socialdemokratiska Parti) is one of the four major political parties in Finland, along with the National Coalition Party, The Finns Party and the Centre Party. Antti Rinne is the party's current chair. The party has been represented in the Finnish cabinet for long periods, and has set many fundamental policies of the Finnish state. The party is currently in the opposition. The party's ideology is social democracy. The SDP has a close relationship with the Central Organisation of Finnish Trade Unions (SAK), and is a member of the Socialist International and the Party of European Socialists.

In the early 20th century, the SDP commanded some 40% of the vote, but after the Finnish Civil War of 1918, Communists split from the party to form the Communist Party of Finland. After that, the SDP has usually commanded 20–29% of the total votes in those elections that Communists or their fronts have been allowed to contest. There was an uninterrupted 30-year period of social democratic presidents between 1982 and 2012.

Despite the fact that the word sosiaali in modern Finnish has a long a, the name of this party is officially spelt in an old-fashioned way with a short a, for historical reasons.

Ideology and voter base

The party calls itself "a modern, centre left party" with "progressive" ideals.[5] The first value that the party uses to describe itself is "a fair society". The party states that "A society without fairness, is a society without meaning. Success, opportunity and freedom must be open to all people, and society should reward hard work and fair-play – not greed, status or chance. The measure of people should be their respect for others, not their wealth and background or characteristics such as race, sexuality or gender." The second value that the party uses to describe itself is "a supportive state". The party states that "States should not decide how people live their lives, but they can give people the power to choose for themselves. The state should not be an authority above citizens, but a solid base below them - on which they can build their lives with the services and security they need to pursue their dreams." The third value that the party uses to describe itself is "a sustainable future". The party states that "We cannot ignore the great problems of tomorrow, for the small benefits of today. Environmental damage, reckless economic activity and a weakening of social care all pose threats to the future of our country and our world. An active state and international cooperation must be the tools with which we build a sustainable future."[5]

The SDP has long advocated policies to prevent foreigners from working in Finland.[9] In the 2015 parliamentary election, only the Finns Party had a higher share of candidates opposed to easing of work-based immigration.[10]

The party opposed economic reforms in the 2011 parliamentary election and in the subsequent government program negotiations.[11][12][13]

The party maintains close relationship with trade union leaders. The party has strongly opposed social welfare reforms that would reduce the role of earnings-related unemployment benefits. The government pays them to recipients through financial middlemen that are almost all trade unions.[14]

The SDP was founded as the Finnish Labour Party (Finnish: Suomen Työväenpuolue) in 1899. The name was changed to the present form in 1903. SDP was closely afflicted with the 1907 established Finnish Trade Union Federation (SAJ), as all of its members were also members of the party.[17] The party remained a chiefly extra-parliamentary movement until the universal suffrage of 1906 (before Finland's independence from Russia in 1917), after which the SDP's share of the votes at best reached 47% in 1916, when the party secured a majority in the parliament — the only time in the history of Finland when one party has had such a majority. The party lost its majority in the 1917 election, and in 1918, started a rebellion that escalated into the Finnish Civil War.

SDP members declared Finland a Socialist Republic, but were defeated by the forces of the Finnish Senate (whites). The war resulted in most party leaders on all levels being killed, imprisoned or seeking refuge in Soviet Russia. In addition, the process leading to the Civil War and the war itself had stripped the party of its political legitimacy and respectability in the eyes of the right-wing majority. However, the political support for the party remained strong, and in the election of 1919, the party, reorganised by Väinö Tanner, got 80 of the 200 seats in the parliament. Some refugee Social Democrats founded the Communist Party of Finland in Moscow in 1918. Although the Communist Party was banned in Finland until 1944, it was represented by front organizations, and the support of the Finnish working class was divided between these and the SDP.

It became the life's work of Väinö Tanner to regain the SDP's reputation as a party capable of dealing with serious matters, such as governing Finland. The result was a much more patriotic SDP, leaning less to the left and relatively isolated from its Nordic sister parties. P.E. Svinhufvud's animosity however kept SDP out of the government during his presidency in 1931–1937. With the exception of a brief period in 1926 (when Tanner formed a minority government), SDP was excluded from cabinet participation until Kyösti Kallio was elected president in 1937. During World War II the party played a central role in a series of broad coalition cabinets, symbolising national unity forged in response to the threat of the USSR in the Winter War in 1939–1940.

During the first few months of the Continuation War (1941–1944), the country, the parliament, and the cabinet were divided on the question whether Finland's army should stop at the old border and thereby demonstratively refrain from any attempts of conquests. However, the country's dangerous position called for national unity, and SDP's leadership chose to refrain from any visible protests. This decision is sometimes indicated as one of the main reasons behind the post-war division between the main left-wing parties — the SDP and the Communists — and the high percentage of Communist voters in the first elections after the Continuation War.

After the Continuation War, the Communist Party was allowed to work openly, and the main feature of Finnish political life during the 1944–1949 period was fierce competition between the Social Democrats and the Communists for voters and for control of the labor unions. At this time, the political field was divided roughly equally between the Social Democrats, Communists and the Agrarian League, each party commanding some 25% of the vote. In the post-war era, the Social Democratic Party adopted a line defending the Finnish sovereignty and democracy in line with the Agrarian League and other bourgeois political parties, finally leading to the expulsion of the Communists from the cabinet in 1948. However, it remained obvious that the Soviet Union was much more openly critical against SDP than against the "openly" bourgeois parties.

Because of SDP's anti-communist activities, the United States Central Intelligence Agency supported the party by means of funds laundered through Nordic sister parties, or through organizations that bought "luxury goods" such as coffee abroad, then imported and sold them for a high profit, as post-war rationing served to inflate prices.

In the presidential election of 1956, the SDP candidate Karl-August Fagerholm lost by only one electoral college vote to Urho Kekkonen. Fagerholm would act as a prime minister in 1956–1957 and in 1958–1959. The latter cabinet was forced to resign due to Soviet pressure, leading to a series of cabinets led by the Agrarian League. In 1958, due to the election of Väinö Tanner as party chairman, a faction of SDP resigned and formed the Alliance of Finnish Workers and Small Farmers (TPSL) around the former SDP chairman Emil Skog. The dispute was over several issues: should the party function as an interest group, and should it co-operate with the anti-communists and right-wingers, or with president Kekkonen, the Agrarians and the Communists. During the 1960s, the TPSL dwindled, its members returning little by little to the SDP or joining the Communists. The founder himself, Emil Skog, returned to SDP in 1965, and in 1970, TPSL lost its seats in the parliament.

Only in 1966 was the SDP able to satisfy the Soviet Union about its friendly attitude towards her, and could thus return to the cabinet. Since then, the SDP has been represented in most Finnish cabinets, often cooperating with the centrist-agrarian Centre Party (formerly the Agrarian League), but sometimes with the liberal-conservative National Coalition Party. The SDP was in opposition in 1991–1995, when the main parties in the cabinet were the Centre Party and the National Coalition Party.

The parliamentary election of 1995 saw a landslide victory for the SDP, achieving their best results since Second World War. SDP rose from opposition and chairman Paavo Lipponen headed two cabinets in 1995–2003. During this time, the party adopted a pro-European line and contributed actively to the Finnish membership of the European Union in 1995 in concert with the cabinet. In the 2003 parliamentary election, SDP won 53 of the 200 seats, ending up a close second to the Centre Party. As a result, the Lipponen became the speaker of parliament, and the Centre Party chairwoman Anneli Jäätteenmäki became the new prime minister, leading a coalition cabinet that included the SDP, which got eight ministerial posts. After two months, Jäätteenmäki resigned due to a scandal and was replaced by Matti Vanhanen, also Centre Party.

The majority of SDP members are currently over 60 years old.[15] Approximately 60% of the members are men.[16] 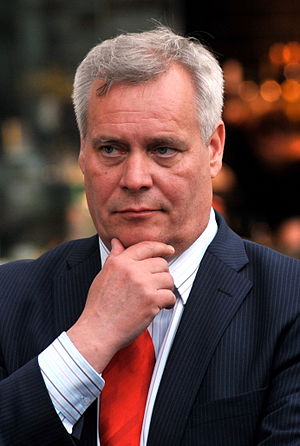 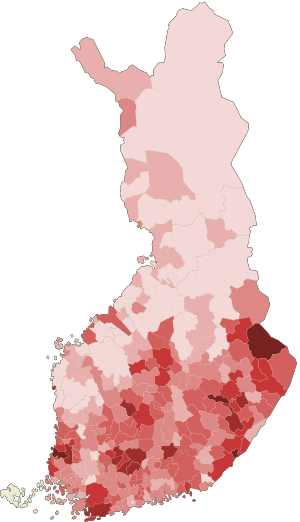 Support for the Social Democrats by municipality in the 2011 parliamentary election — the party fared strongest in southern and eastern parts of the country.

In the 2007 parliamentary election, the party lost eight seats and came third place. The chairman of the largest party, Matti Vanhanen of the Centre Party, was named prime minister, but he selected the second-most popular National Coalition party, the Green League and the Swedish People's Party to the cabinet, leaving the SDP in opposition. The SDP chairman Eero Heinäluoma did not immediately resign as a party chairman, but he did announce his withdrawal from running for party chairman in the next party conference. He was replaced by Jutta Urpilainen. The SDP suffered losses in the 2008 municipal election and the 2009 European election.

In the 2011 parliamentary election the SDP lost three more seats, ending up with 19.1 per cent of the vote and 42 seats, its worst-ever result. However, as the Centre Party lost even more, the Social Democrats came second place after the National Coalition Party, receiving only some 1,500 votes more than the True Finns, who came in third. After lengthy negotiations, a six-party coalition government was formed: the Jyrki Katainen cabinet, with the National Coalition Party and the Social Democrats as its two main parties. The SDP chairwoman Jutta Urpilainen became finance minister, with National Coalition chairman Jyrki Katainen serving as prime minister.

In the 2015 parliamentary election the drop of support continued for the SDP. The SDP lost eight seats from previous elections ending with 34 seats and 16.51% of the votes. With the repeat of the worst-ever result the SDP dropped to become the fourth biggest political party in Finland, receiving 50,110 votes fewer than the National Coalition Party and 237,000 votes more than the Green League. After the election the government negotiator Juha Sipilä decided to start negotiations between the three biggest parties Centre Party (Finland), Finns Party and National Coalition Party leaving SDP to the opposition for the next four years.

0 The 1988 Presidential election was partially indirect: after Koivisto had failed to get a majority of the popular vote, he was elected president in the electoral college, which the voters voted for alongside the direct vote.
1 first round
2 second round