The Social Democratic Party of Germany (German: Sozialdemokratische Partei Deutschlands, SPD) is a social-democratic[4][5][6] political party in Germany. The party is led by Sigmar Gabriel and is one of the two major contemporary political parties in Germany, along with the Christian Democratic Union (CDU).

The SPD currently governs at the federal level in a grand coalition with the CDU and Christian Social Union (CSU) since December 2013 following the results of the 2013 federal election. The SPD participates in 14 state governments, of which nine are governed by SPD Minister-Presidents.

The SPD is a member of the Party of European Socialists and the Socialist International, and was a founding member of the Progressive Alliance on 22 May 2013.[7][8][9] Established in 1863, the SPD is the oldest extant political party represented in the German Parliament. It was also one of the first Marxist-influenced parties in the world. 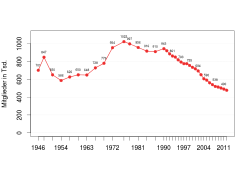 Membership development after 1945
Main article: History of the Social Democratic Party of Germany

The General German Workers' Association (Allgemeiner Deutscher Arbeiterverein, ADAV), founded in 1863, and the Social Democratic Workers' Party (Sozialdemokratische Arbeiterpartei Deutschlands, SDAP), founded in 1869, merged in 1875, under the name Socialist Workers' Party of Germany (Sozialistische Arbeiterpartei Deutschlands, SAPD). From 1878 to 1890, any grouping or meeting that aimed at spreading socialist principles was banned under the Anti-Socialist Laws, but the party still gained support in elections. In 1890, when the ban was lifted and it could again present electoral lists, the party adopted its current name. In the years leading up to World War I, the party remained ideologically radical in official principle, although many party officials tended to be moderate in everyday politics. By 1912, the party claimed the most votes of any German party.

Despite the agreement of the Second International to oppose the First World War, the SPD voted in favor of war in 1914. In response to this and the Bolshevik Revolution, members of the left and of the far-left of the SPD formed alternative parties, first the Spartacus League, then the Independent Social Democratic Party of Germany and later the Communist Party of Germany. After 1918 the SPD played an important role in the political system of the Weimar Republic, although it took part in coalition governments only in few years (1918–1921, 1923, 1928–1930). Adolf Hitler prohibited the party in 1933 under the Enabling Act – party officials were imprisoned, killed or went into exile. In exile, the party used the name Sopade.

In 1945, the allied occupants in the Western zones initially allowed four parties to be established, which led to the Christian Democratic Union, the Free Democratic Party, the Communist Party of Germany, and the SPD being established. In the Soviet Zone of Occupation, the Soviets forced the Social Democrats to form a common party with the Communists (Socialist Unity Party of Germany or SED). In the Western zones, the Communist Party was later (1956) banned by West Germany's Federal Constitutional Court. Since 1949, in the Federal Republic of Germany, the SPD has been one of the two major parties, with the other being the Christian Democratic Union. From 1969 to 1982 and 1998 to 2005 the Chancellors of Germany were Social Democrats whereas the other years the Chancellors were Christian Democrats.

The SPD was established as a Marxist party in 1875. However, the SPD underwent a major shift in policies reflected in the differences between the Heidelberg Program of 1925, which "called for the transformation of the capitalist system of private ownership of the means of production to social ownership",[10] and the Godesberg Program of 1959, which aimed to broaden its voter base and move its political position toward the centre.[11] After World War II, under the leadership of Kurt Schumacher, the SPD re-established itself as a socialist party, representing the interests of the working class and the trade unions. With the Godesberg Program of 1959, however, the party evolved from a socialist working-class party to a modern social-democratic party working within capitalism.

The current party platform of the SPD espouses the goal of social democracy, which is seen as a vision of a societal arrangement in which freedom and social justice are paramount. According to the party platform, freedom, justice, and social solidarity, form the basis of social democracy. The coordinated social market economy should be strengthened, and its output should be distributed fairly. The party sees that economic system as necessary in order to ensure the affluence of the entire population. The SPD also tries to protect the society's poor with a welfare state. Concurrently, it advocates a sustainable fiscal policy that doesn't place a burden on future generations while eradicating budget deficits. In social policy, the SPD stands for civil and political rights in an open society. In foreign policy, the SPD aims at ensuring global peace by balancing global interests with democratic means. Thus, European integration is one of the main priorities of the SPD. SPD supports economic regulations to limit potential losses for banks and people. They support a common European economic and financial policy, and to prevent speculative bubbles. They support environmentally sustainable growth.[12]

The SPD is mostly composed of members belonging to either of the two main wings: Keynesian social democrats, and the Third Way, moderate social democrats belonging to the Seeheimer Kreis. While the moderate, Seeheimer Kreis social democrats strongly support the Agenda 2010 reformist programs introduced by former Chancellor Gerhard Schröder, the Keynesian social democrats continue to defend classical left-wing policies such as the apology of the welfare state. The classical left-wing of the SPD claims that in recent years the welfare state has been curtailed through reform programs such as the Agenda 2010, Hartz IV and the more economic liberal stance of the SPD, which were endorsed by right-wing social democrats.[citation needed] As a reaction to the Agenda 2010 there was 2005 the ascension of an inner party dissident movement, which leads ultimately to the foundation of the new party Labour and Social Justice – The Electoral Alternative (Arbeit & soziale Gerechtigkeit – Die Wahlalternative (WASG)). The WASG was later merged into the party Die Linke (The Left) 2007.[13]

Before World War II, as the main non-revolutionary left-wing party, the Social Democrats fared best among non-Catholic workers as well as intellectuals favouring social progressive causes and increased economic equality. Led by Kurt Schumacher after World War II, the SPD initially opposed both the social market economy and Konrad Adenauer's drive towards western integration fiercely, but after Schumacher's death, it accepted the social market economy and Germany's position in the Western alliance in order to appeal to a broader range of voters. It still remains associated with the economic causes of unionised employees and working class voters. In the 1990s, the left and moderate wings of the party drifted apart, culminating in a secession of a significant number of party members, which later joined the socialist party WASG, which later merged into The Left (Die Linke) party. 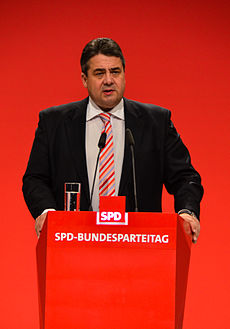 Geographically, much of the SPD's current-day support comes from large cities, especially of northern and western Germany and Berlin. The metropolitan area of the Ruhr Area, where coal mining and steel production were once the biggest sources of revenues, have provided a significant base for the SPD in the 20th century. In the state Free Hanseatic City of Bremen the SPD has governed without interruption since 1949. In southern Germany, the SPD typically garners less support except in the largest cities. At the 2009 federal election, the party lost its only constituency in the entire state of Bavaria (in Munich). Small town and rural support comes especially from the traditionally Protestant areas of northern Germany and Brandenburg (with notable exceptions such as Western Pomerania where CDU leader Angela Merkel was re-elected in 2005) and a number of university towns. A striking example of the general pattern is the traditionally Catholic Emsland, where the Social Democrats generally gain a low percentage of votes, whereas the Reformed Protestant region of East Frisia directly to the north, with its strong traditional streak of Anti-Catholicism, is one of their strongest constituencies. Further south, the SPD also enjoys solid support in northern Hesse (Hans Eichel was mayor of Kassel, then Hesse's minister president, then finance minister in the Schröder administration, while Brigitte Zypries served as Justice Minister), parts of Palatinate (Kurt Beck was party leader until 7 September 2008), and the Saarland (political home of one-time candidate for federal chancellor Oskar Lafontaine, defected from the SPD in 1999).