From Infogalactic: the planetary knowledge core
(Redirected from Social and Decision Sciences)
Jump to: navigation, search

The Department of Social Sciences grew out of the social science programs in the Margaret Morrison Carnegie College. The formal department was established in 1976, as part of the Dietrich College of Humanities and Social Sciences under Dean John Patrick Crecine with approval from Heinz College Dean Otto Davis, which previously housed the program. The department was staffed by political scientists, sociologists, and economists from within the Dietrich College, the Heinz College, and the Tepper School of Business. In the 1980s, the department was led by Patrick D. Larkey and developed the undergraduate information systems program which became a huge success, eventually being spun off into an independent interdisciplinary program in the Dietrich College. In 1985, Robyn Dawes joined the department and began to re-focus it into its current form and expertise in behavioral decision-making and caused it to be renamed as the Department of Social and Decision Sciences.[3] Carnegie Mellon's Institute for Politics and Strategy was spun off of the department in 2015.

The department runs highly regarded undergraduate bachelor of science programs in Decision Science and Policy and Management as well as minors in Innovation, Entrepreneurship, and Economic Development and Policy and Management. Further, SDS is a partner in various interdisciplinary undergraduate programs such as the Sociology minor, Environmental Policy program, and the Quantitative Social Science Scholars program. At the master's degree level, SDS partners with several other colleges and departments for the Master of Information Technology Strategy program and the Engineering and Technology Innovation Management program. The graduate PhD program allows doctoral students options in Social and Decision Sciences, Behavioral Decision Research (BDR), Strategy, Entrepreneurship, and Technological Change (SETchange), Technological Change and Entrepreneurship as well as a joint PhD in Behavioral Decision Research and Psychology with the Department of Psychology. All students are trained in policy analysis and research methods.[4] SDS is also closely associated with its spin-off programs: the undergraduate Information Systems program and the Institute for Politics and Strategy.

The department's primary strength lies in interdisciplinary research, particularly in the intersection of politics and sociology with economics, psychology and human decision making. Statistics, microeconomics, rational decision theory and game theory are among the many areas of specialization. SDS faculty are very involved in interdisciplinary research throughout the university, and are drawn from fields as diverse as economics, psychology, sociology, history, management science, and political science. SDS is affiliated with several labs and centers: 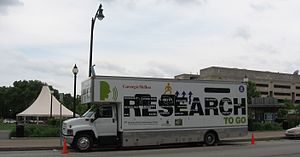 As part of the Center for Behavioral Decision Research, SDS manages the Data Truck and managed the Carnegie Mellon Research Cafe. The Data Truck is a mobile behavioral science lab.[5] The Research Cafe was a cafe located in downtown Pittsburgh and was designed to perform behavioral research outside of the student population on the main Carnegie Mellon Pittsburgh campus where the SDS labs are located.[6] The cafe is now closed.