The Society of Illustrators is a professional society based in New York City.

The Society of Illustrators was founded on February 1, 1901, by a group of nine artists and one advising businessman.[1] The mission statement was "to promote generally the art of illustration and to hold exhibitions from time to time."[2] 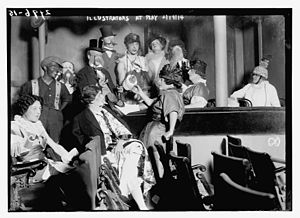 Society of Illustrators members at the Berkeley Theater in Manhattan (February 19, 1914)

During the World War I years, Society members worked through the Division of Pictorial Publicity, creating many original poster designs, including James M. Flagg's US Army recruiting poster of Uncle Sam. Eight Society members, commissioned Captains in the Engineers, were sent to France to sketch the war. After the war, the Society operated the School for Disabled Soldiers.[1]

In 1920, the Society was incorporated, and women became full members. The 1920s and 1930s were the heyday of the Illustrator's Shows, featuring the artists and their models as actors, songwriters, set designers and painters. Professional talent such as the Cotton Club band and Jimmy Durante also performed.[1] Through member Watson Barrett, the Illustrator's Show of 1925 was held at the Shubert Theatre, and the Shuberts purchased the rights to the skits for their Broadway productions of Artists and Models.

In time, those funds allowed the Society to acquire its present headquarters, at 128 East 63rd Street. Norman Rockwell's Dover Coach became the backdrop for the bar on the fourth floor. This painting currently hangs in the Members Dining Room.

During World War II, the Society again contributed to the effort with a massive campaign of posters, illustrations and visits to veterans’ hospitals to sketch the wounded.[1] These pictures were sent to families to help boost morale. The Illustrator's Jazz Band was formed to entertain the wounded. In 1946, a Welfare Fund for indigent artists was established. In 1948, the Joint Ethics Committee developed the first Code of Fair Practice. [1]

In 1954, the U.S. Air Force began sending members around the world to document its activities. This program continues today. Thousands of paintings have been contributed over the years. The first Scholarship Fund was established in the early 50s and, in 1959, Norman Rockwell became the first member elected to the Society's hall of fame.

In 1959, the Society held its first Annual Exhibition, juried by Bob Peak, Bradbury Thompson, Stevan Dohanos and others. It opened with 350 original works of art and led to the publication of the first Illustrators Annual.[1]

Other notable events include the filming of Loving (1969) with George Segal portraying a frustrated illustrator; the Warwick (NY) Training School for Boys Saturday school (1961–65); The antiwar show "Genocide" (1972); the Bicentennial Show at the New-York Historical Society (1976–77); and the publication of 200 Years of American Illustration and The Illustrator in America; outreach programs to the Police Athletic League (1966–present); the New York City Parks Department (2001–present), and the New York City Board of Education (1999–present); the donation to shelters and charities of over 6,000 children's books (1992–present). 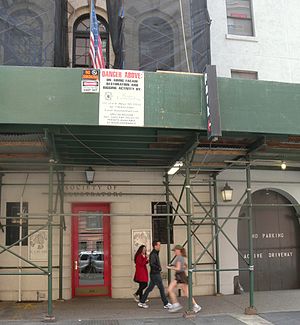 In 2007 a new director, Anelle Miller, set about changing the 'old boys' club' image of the Society, targeting a younger audience via cartoonists and illustrators of graphic novels. A popular show of cartoonists work was staged in 2011.[2] In 2008, the Society celebrated its 50th Annual Exhibition.

The Museum of Comic and Cartoon Art (MoCCA) transferred its assets in August 2012 to the Society, which has continued the MoCCA Fest.[2]

The Society of Illustrators inaugurated the Hall of Fame program in 1958, to recognize "distinguished achievement in the art of illustration". The first recipient was Norman Rockwell.[3] Like other recognized artists, he was elected by former Society presidents for his contributions to the field of illustration. Every year since 1958, one or more illustrators have been added to the Hall of Fame.[3] In 2001, two additional forms of recognition were added: Dean Cornwell Recognition Award and the Arthur William Brown Achievement Award, which may be awarded annually.[3]