listen), as if it were 'Sohst') is a city in North Rhine-Westphalia, Germany. It is the capital of the Soest district. After Lippstadt, a neighbouring town, Soest is the second biggest town in its district.[citation needed] 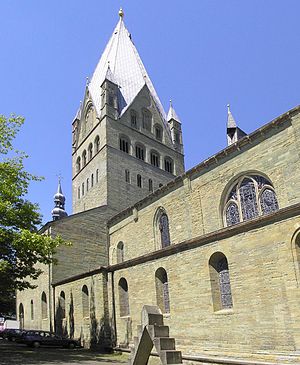 The Norwegian Þiðrekssaga from the 13th century, a series of tales about the Gothic King Theoderic the Great, identifies Soest (called Susat) as the capital of Attila's (?–453) Hunnic Empire. The actual location of Attila's capital has not been determined.[2]

Because of the fertile soil (dominantly brown silty clay loam,[3]) the area around Soest was occupied long before 836 when the village is first mentioned in the Dagobertsche Schenkung, although the origin of this document is historically uncertain. But there is no doubt that Soest has been inhabited for a long time; excavations in the last two decades have uncovered signs of habitation stretching back more than 4000 years. In the 11th and 12th centuries, Soest grew considerably, making it one of the biggest towns in Westphalia with some 10,000 citizens. It was also an important member of the Hanseatic League until 1609.

A self-confident Soest from 1444 to 1449 liberated itself from the Bishop of Cologne, who controlled Westphalia (the so-called Soest Feud). Being no longer capital of Westphalia, the city aligned itself with the Duke of Cleves. This was a Pyrrhic victory, however; the city had shown itself strong enough to defy the powerful Archbishop of Cologne, but lost much of its trade: the "liberated" town was two-thirds surrounded by territories with other allegiances. When the last Duke of Cleves died in 1609, that dukedom was inherited by Brandenburg and, after a short siege, Soest was incorporated into it.

The painter Peter Lely, later to win fame in England, was born in 1618 to Dutch parents in Soest, where his father was an officer serving in the armed forces of the Elector of Brandenburg.

During and after the Thirty Years' War, Soest suffered a tremendous loss of both population and influence; at the lowest point in 1756 it had only 3,600 citizens.

With the creation of the Soest district in 1817, its influence slowly rose. However, the industrialization of the Ruhr area did not reach Soest, which remained a small town.

The Nazi Party placed Soest in Gau Westphalia-South.[4] During World War II, Soest was the target of several allied bomber raids targeted at the marshalling yard, which was one of the biggest in the Reich, and the important battery factory Akku Hagen. Later, Soest suffered major fighting in early April 1945, starting when Allied forces captured the town at the beginning of the month. They were soon evicted by a German counterattack. Destructive front-line combat raged in Soest and its environs through the first week of April until the Allies gained a permanent upper hand.

From approximately 1953 to 1971, there was a sizeable garrison of Canadian soldiers and their families stationed at Soest (with the Canadian camps located just east of the town in Bad Sassendorf) as well as Werl and Hemer-Iserlohn and Deilinghofen to the southwest. There were also several Belgian Kasernes located in Soest itself. In addition, there was an American Nike Battery (66th Battalion) situated to the south, which was subsequently turned over to the German military.

From 1971-1993, the former Canadian properties, including the Married Quarters along Hiddingser Weg, south of the B-1, were used and occupied by the British military personnel and their families. On the closure of the Belgian and British army facilities, many of these properties either became used for civilian purposes or were abandoned or demolished. The former Married Quarters area was converted to civilian housing. The former CLFEX (the Canadian Army's food and clothing store for NATO families) was converted to a NAAFI under the British and finally demolished in 2006.

Soest has a multitude of historical buildings and attractions. The many medieval churches are built from a greenish sandstone unique to this area.

The place comes alive on weekends, with the youngsters pub-hopping from Dimwittekar to Pesel, which is a pub with a dance floor. The place boasts a discothèque and several pubs serving fresh-brewed beer.

In 960, Bruno I, Archbishop of Cologne transferred relics of St. Patroclus from Troyes to Soest. Since 964, they have been housed in what became the provost church St.-Patrokli-Dom (St. Patroclus' "Cathedral"), a particularly fine example of Romanesque architecture.

The Swiss German university at the Soest University has an influx of interns and exchange students from across India, Africa and Indonesia. The Indian students come from Madurai Kamaraj University and Sastra University in Tamil Nadu.[citation needed]

The cathedral is a beautiful[citation needed] example of early medieval Romanesque architecture fashioned from the local greenish sandstone. Its massive squared bell tower or steeple can be seen for many kilometers,[citation needed] rising up out of the town centre of the old town and a landmark of the Soester Boerde.

The Allerheiligenkirmes is named for All Saints' Day as it starts every year at the first Wednesday after All Saints' and lasts for five days. It is Europe's biggest inner-city fair[citation needed] and was held for the 673rd time in 2010.

Among the old specialties of Soest are the Möppken bread and pumpernickel. The Haverland bakery in the town center, which formerly supplied the dark bread to the royal court of Bavaria, has existed since 1570. A newer specialty is Bullenauge (bull's eye), a mocha liqueur, sold mostly at the Allerheiligenkirmes. Another specialty is the Soester beer, also called Zwiebel-Bier, which literally translates as 'onion beer' as since 1993 it has been brewed in the Zwiebel (Onion) inn.

The coat of arms shows a key, which is the symbol for Saint Peter, the patron saint of Cologne. The coat was not modified even after Soest no longer fell within the jurisdiction of Cologne.

Soest is twinned with: