The University of Sofia (St. Kliment Ohridski) or simply Sofia University (Bulgarian: Софийски университет „Св. Климент Охридски“, Sofiyski universitet „Sv. Kliment Ohridski“) is the oldest higher education institution in Bulgaria, founded on 1 October, 1888. The edifice of the university was constructed between 1924 and 1934 with the financial support of the brothers Evlogi Georgiev and Hristo Georgiev, whose sculptures are now featured on its façade, and has an area of 18,624 m² and a total of 324 premises.

The university has 16 faculties and three departments, where over 21,000 students receive their education. In addition, it also disposes of a university library, a university press, a computer centre, a sports centre and several other structures. The current rector is Ivan Ilchev.

Sofia University has been consistently ranked as the top university in Bulgaria according to national and international rankings, and is constantly among the best 4 percent of world universities according to QS World University Rankings. 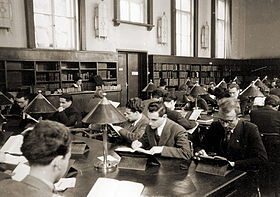 The university was founded on 1 October 1888, 10 years after the Liberation of Bulgaria, to serve as Bulgaria's primary institution of higher education. Initially, it had 4 regular and 3 additional lecturers and 49 students. It was founded as a higher pedagogical course, it became a higher school after a few months and a university in 1904. The first rector was Bulgarian linguist Aleksandar Teodorov-Balan.

During Sofia University's first years, it had three faculties, a Faculty of History and Philology (since 1888), a Faculty of Mathematics and Physics (since 1889) and a Faculty of Law (since 1892). History, geography, Slavic philology, philosophy and pedagogics, mathematics and physics, chemistry, natural sciences and law were taught.[1] The first women, 16 in number, were welcomed to the university in 1901, and 25 November (8 December N.S.), the day of St Kliment of Ohrid, became the university's official holiday the following year.

In 1907, as Prince Ferdinand opened the National Theatre, he was booed by Sofia University students, for which the university was closed for 6 months and all lecturers were fired. Not until a new government with Aleksandar Malinov at the head came into power in January 1908 was the crisis resolved.

The foundation stone of Sofia University's new edifice was laid on 30 June 1924. Funds were secured by the brothers Evlogi Georgiev and Hristo Georgiev. The rectorate was built according to the initial plans of the French architect Henri Bréançon, who had won a competition for the purpose in 1907. The plans were developed by Nikola Lazarov and revised by Yordan Milanov, who also directed the construction, but died before the official opening on 16 December 1934.

On 27 October 1929 the first doctoral thesis, in natural science, of the university was defended by Vassil Tsankov. The second one, in chemistry, followed on 1 July 1930 by Aleksandar Spasov. In 1930–1931, the university had four more doctors.

After the political changes of 9 September 1944 and the emergence of the People's Republic of Bulgaria, radical alterations were made in the university system of the country. At that time, 1944–45, 13,627 students attended the university, taught by 182 professors and readers and 286 assistants. Communist professors were introduced to the higher ranks of university authority, with others that did not share these views being removed. Specific party-related chairs were established and the university was restricted after the Soviet model. Three new faculties were founded in 1947, one of forestry, one of zootechnics and one of economics and major changes occurred, with many departments seceding in later years to form separate institutions.

The Sofia University Mountains on Alexander Island, Antarctica were named for the university in commemoration of its centennial celebrated in 1988, and in appreciation of the university’s contribution to the Antarctic exploration. 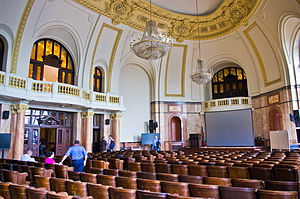 One of the lecturing halls in the Rectorate 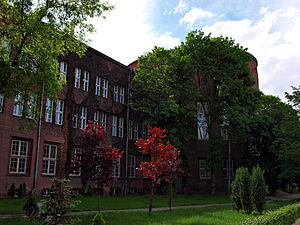 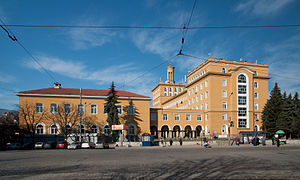 The Sofia University offers a wide range of degrees in 16 faculties: