From Infogalactic: the planetary knowledge core
Jump to: navigation, search
This article is about the wood. For other uses, see SoftWood. 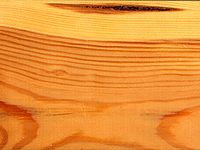 Softwood is wood from gymnosperm trees such as conifers. Softwood is the source of about 80% of the world's production of timber, with traditional centres of production being the Baltic region (including Scandinavia and Russia), North America and China. The term is opposed to hardwood, which is the wood from angiosperm trees. Softwoods are not necessarily softer than hardwoods. In both groups there is an enormous variation in actual wood hardness, with the range in density in hardwoods completely including that of softwoods; some hardwoods (e.g. balsa) are softer than most softwoods, while the hardest hardwoods are much harder than any softwood. The woods of longleaf pine, douglas fir, and yew are much harder in the mechanical sense than several hardwoods.