From Infogalactic: the planetary knowledge core
(Redirected from Sogut)
Jump to: navigation, search
For other places with the same name, see Söğüt (disambiguation). 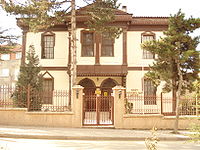 Museum of Ertuğrul Ghazi in Söğüt.

Söğüt [søʲyt] is a town and district of Bilecik Province in the Marmara region of Turkey. Söğüt has an area of 599 km2 (231 sq mi) and borders Bilecik to the west, Gölpazarı to the north, İnhisar to the northeast, Eskişehir to the southeast, and Bozüyük to the southwest. The 2000 census put the population at 21,012 citizens, and according to a 2010 estimate, the population was 19,425. Söğüt has 5 boroughs and 23 villages. Two of these villages, Çaltı and Küre, have a municipality. Söğüt is 31 km away from Bilecik and 52 km away from Eskişehir. It depends economically on Eskişehir. The mayor is Osman Güneş (AKP). Historically it was the first capital of the Ottoman Empire from its formation in 1299 to 1335.

Söğüt was a Seljuk Turkish tribe in western Anatolia that later gave birth to the Ottoman Empire. It was a small but sophisticated tribe that extended from the Kayi branch of the Seljuk Turks that in the 12th and 13th centuries invaded Anatolia. The village of Söğüt was surrounded by three greater Turkish tribes; Eskenderum in the north, Eskişehir in the east, Konyali in the south; and with the Byzantine Empire in the west. Legend has it that the bey (chief) of the tribe in the late 13th century, Ertuğrul, bravely kept the enemies at bay so that his son, Osman, could conquer them all during his reign, 1299 to 1324. When Osman's son, Orhan, came to power after his father's death he renamed the tribe Osmanli in honour of his father. The village of Söğüt (formerly Thebasion until 1231) later grew into a town that served the Osmanli tribe as capital until the capture of the Byzantine city of Prusa in 1325 when the capital was moved to the far more luxurious palaces of the Byzantines.

Söğüt was the birthplace of Sultan Osman I. It was conquered by Ertuğrul for the Anatolian Seljuks from the Nicean Empire in 1231. It was called Thebasion before the Turkish conquest.

Today Söğüt is a small town in the humid river valley of Bilecik Province in Turkey. Turkish history and life-size statues of the Ottoman sultans are exhibited in the Söğüt Ethnographical Museum. It is also the 3rd biggest district center in its province after Bozüyük and Bilecik. Its market is open every Thursday and some people visit the city from the districts of İnhisar and Yenipazar for shopping.