Soissons (French pronunciation: ​[swa.sɔ̃]) is a commune in the Aisne department in Picardy in northern France, located on the Aisne River, about 100 kilometres (62 mi) northeast of Paris. It is one of the most ancient towns of France, and is probably the ancient capital of the Suessiones. Soissons is also the see of an ancient Roman Catholic diocese, whose establishment dates from about 300.

Soissons enters written history under its Celtic name (as later borrowed in Latin), Noviodunum, meaning "new hillfort". At Roman contact, it was a town of the Suessiones, mentioned by Julius Caesar (B. G. ii. 12). Caesar (B.C. 57), after leaving the Axona (modern Aisne), entered the territory of the Suessiones, and making one day's long march, reached Noviodunum, which was surrounded by a high wall and a broad ditch. The place surrendered to Caesar.

From 457 to 486, under Aegidius and his son Syagrius, Noviodunum was the capital of the "Kingdom of Soissons", until it fell to the Frankish king Clovis I in the Battle of Soissons.

Part of the Frankish territory of Neustria, the Soissons region, and the Abbey of Saint-Médard, built in the 8th century, played an important political part during the rule of the Merovingian kings (A.D. 447-751). After the death of Clovis I in 511, Soissons was made the capital of one of the four kingdoms into which his states were divided. Eventually, the kingdom of Soissons disappeared in 613 when the Frankish lands were amalgamated under Clotaire II.

In 744 the Synod of Soissons met at the instigation of Pippin III, and Saint Boniface, the Pope's missionary to pagan Germany, secured the condemnation of the Frankish bishop Adalbert and the Irish missionary Clement.

During the Hundred Years' War, French forces committed a notorious massacre of English archers stationed at the town's garrison, in which many of the French townsfolk were themselves raped and killed.[1] The massacre of French citizens by French soldiers shocked Europe; Henry V of England, noting that the town of Soissons was dedicated to the saints Crispin and Crispinian, claimed to avenge the honour of the saints when he met the French forces at the Battle of Agincourt on St Crispin's Day 1415.

Between June 1728 and July 1729 it hosted the Congress of Soissons an attempt to resolve a long-standing series of disputes between Great Britain and Spain which had spilled over into the Anglo-Spanish War of 1727. The Congress was largely successful and led to the signing of a peace treaty between them.

The town was on the main path of totality for the Solar eclipse of August 11, 1999.

File:Panorama soissons.jpg
Panoramic view from the top of the cathedral

Today, Soissons is a commercial and manufacturing centre with the 12th century Soissons Cathedral and the ruins of St. Jean des Vignes Abbey as two of its most important historical buildings. The nearby Espace Pierres Folles contains a museum, geological trail, and botanical garden. 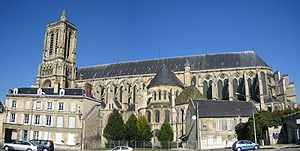 The Cathédrale Saint-Gervais-et-Saint-Protais de Soissons is constructed in the style of Gothic architecture. The building of the south transept was begun about 1177, and the lowest courses of the choir in 1182. The choir with its original three-storey elevation and extremely tall clerestory was completed in 1211. This was earlier than Chartres, on which the design was supposed to have been based. Work then continued into the nave until the late 13th century.[2]