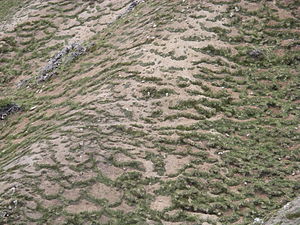 In geomorphology, solifluction is a gradual mass wasting slope process related to freeze-thaw activity,[1] occurring in periglacial environments. In 1906 Johan Gunnar Andersson interpreted solifluction as a mass wasting process that occurs most commonly in colder climates where periods of freezing and thawing are regular occurrences. A type of creep process, solifluction describes the slow downslope movement of water-saturated sediment due to recurrent freezing and thawing of the ground, affected by gravity. Frost heave (movement perpendicular to surface) due to volumetric ice expansion and gelifluction (movement parallel to surface) during thaw settlement of the ground, cause gravity-induced shear deformation of sediment, associated with high pore-water pressures. The rates of solifluction movement are highly dependent on active layer thaw depths, ice content and the influence of meteorological conditions. The occurrence of solifluction is dependent on the composition of the slope; higher amounts of impermeable materials, such as silt and clay, are more prone to solifluction than soils with larger grain sizes that allow for greater filtration and less over-saturation. Solifluction rates vary dependent on season and can range from centimeters per week to centimeters per year. Solifluction landforms, such as solifluction lobes or sheets, occur over large shallow sloping areas and are one of the most widespread periglacial landforms. Lobes, on average, can be 30–50 m wide. Solifluction lobes move most quickly in the center of the mass, and slower around the edges causing larger amounts of sediment to accumulate around the edges. When many lobes are in sequence, the appearance is like a staircase in profile.

Solifluction is a form of ice-mediated creep. In temperate and tundra region, soil flows occur when the surface layers of frozen ground thaw in spring. Soil and rock debris lubricated by the melt-water flow easily over the underlying frozen subsoil. In areas of peat soils, the peat absorbs much moisture. However, if saturation point is reached the peaty soil may flow downslope. In Ireland such flows are known as bog-bursts. Other factors in solifluction are: sparse vegetation, snow melt and high amounts of precipitation. Solifluction should not be confused with earthflow, which is a much more rapid process.

Solifluction on other bodies

It was suggested that solifluction might be active on Mars,[2][1] even relatively recently (within the last few millions years), as observed martian lobates bear many similarities with solifluction lobes known from Svalbard.[1]