Somatotype is a taxonomy developed in the 1940s, by American psychologist William Herbert Sheldon, to categorise the human physique according to the relative contribution of three fundamental elements, somatotypes, named after the three germ layers of embryonic development: the endoderm, (develops into the digestive tract), the mesoderm, (becomes muscle, heart and blood vessels), and the ectoderm (forms the skin and nervous system).[1] His initial visual methodology has been discounted as subjective, but later formulaic variations of the methodology, developed by his original research assistant Barbara Heath, and later Lindsay Carter and Rob Rempel are still in academic use.[2][3][4]

Constitutional psychology is a now neglected theory, also developed by Sheldon in the 1940s, which attempted to associate his somatotype classifications with human temperament types.[5][6] The foundation of these ideas originated with Francis Galton and eugenics.[2] Sheldon and Earnest Hooton were seen as leaders of a school of thought, popular in anthropology at the time, which held that the size and shape of a person's body indicated intelligence, moral worth and future achievement.[2]

In his 1954 book, Atlas of Men, Sheldon categorised all possible body types according to a scale ranging from 1 to 7 for each of the three "somatotypes", where the pure "endomorph" is 7–1–1, the pure "mesomorph" 1–7–1 and the pure "ectomorph" scores 1–1–7.[7][8] From type number, an individual's mental characteristics could supposedly be predicted.[7] Barbara Honeyman Heath, who was Sheldon's main assistant in compiling Atlas of Men, accused him of falsifying the data he used in writing the book.[2] Questions exist about her motivations in making these accusations.[2]

Sheldon's "somatotypes" and their associated physical and psychological traits can be characterized as follows:[3][8] 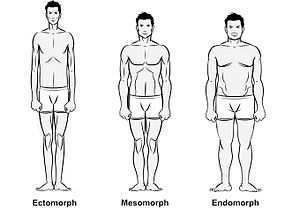 There is evidence that different physiques carry cultural stereotypes. For example, one study found that endomorphs are likely to be perceived as slow, sloppy, and lazy. Mesomorphs, in contrast, are typically stereotyped as popular and hardworking, whereas ectomorphs are often viewed as intelligent but fearful and usually take part in long distance sports, such as marathon running.[9] Stereotypes of mesomorphs are generally much more favorable than those of endomorphs.[citation needed] Stereotypes of ectomorphs are somewhat mixed.[citation needed]

This variant utilises the following series of equations to assess a subject's traits against each of the 3 somatotypes, each assessed on a 7-point scale, with 0 indicating no correlation and a 7 a very strong:

This numerical approach has gone on to be incorporated in the current sports science and physical education curriculums of numerous institutions, ranging from the UK's secondary level GCSE curriculums (14- to 16-year-olds), the Indian UPSC Civil Service exams, to MSc programs worldwide, and has been utilised in numerous academic papers, including:

Sheldon's ideas that body type was an indicator of temperament, moral character or potential—while popular in an atmosphere accepting of the theories of eugenics—were soon widely vilified.[2][11]

The principal criticism of Sheldon's constitutional theory was that it was not a theory at all but one general assumption, continuity between structure and behavior, and a set of descriptive concepts to measure physique and behavior in a scaled manner.[3]

His use of thousands of photographs of naked Ivy League undergraduates, obtained without explicit consent, from a pre-existing program evaluating student posture, has been described as scandalous, and perverted ("the study of nude people by lewd people").[2][12]

His original visual assessment methodology, based on the photographs, has also been criticised as subjective.[2][3][4]

His original thesis has also been described as fraudulent for knowingly failing to acknowledge / account for body shape changing with age.[2]

His suggestion of a genetic link to both body shape and personality traits has also been described as objectional.[4]

Sheldon's work has also been criticised as being heavily burdened by his own stereotypical and discriminatory views.[2][5]