Somerset County is the southernmost county in the American State of Maryland. As of the 2010 census, the population was 26,470.[1] making it the second-least populous county in Maryland. The county seat is Princess Anne.[2] The county was named for Mary, Lady Somerset, the wife of Sir John Somerset and daughter of Thomas Arundell, 1st Baron Arundell of Wardour (ca 1560-1639). She was also the sister of Anne Calvert, Baroness Baltimore (1615-1649), who later lent her name to Anne Arundel County, which was erected in 1650 as the Province of Maryland's third county.

Somerset County is included in the Salisbury, MD-DE Metropolitan Statistical Area. It is located on the state's Eastern Shore

The University of Maryland Eastern Shore is located in Princess Anne.

Somerset County was settled and established in part due to a response to the Province/Dominion of Virginia passing a law in 1659/1660 requiring Quakers in the colony to convert to Anglicanism or leave the colony. A group of Virginia Quakers living in Accomac County, Virginia on the southern tip of the future Delmarva Peninsula, petitioned Charles Calvert, third Lord Baltimore in 1661 to migrate further north on the Eastern Shore of the Chesapeake Bay to the territory under his governance, and the governor saw the opportunity to fortify the borders of his territory on the Delmarva Peninsula against the pressing encroachment of the Virginians.[3]

The Royal Charter that Lord Baltimore had received from King Charles I in 1632 had granted Maryland the land north of the entire length of the Potomac River up to the 40th parallel. Later surveys authorized by Baltimore on the Eastern Shore of the Chesapeake Bay indicated that the southern boundary would continue across the peninsula at the mouth of the Pocomoke River marked on the north shore by a rock outcropping labelled as "Watkins' Point". The Virginian Quakers settled just a bit north of that point, on the southern bank of the Annemessex River in November, 1662, and a separate group of Anglican Virginian settlers were granted permission to make a second settlement further north along the Manokin River.[4]

In conjunction with the two new settlements, Baltimore set up a three-man commission for the Eastern Shore territory, made up of two Marylanders and one Virginian. Its purpose was ostensibly to oversee the territory and the establishment of new settlements and maintain a detailed recording of all land and civic transactions in the area; but in fact Lord Baltimore intended to use the commission to reinforce Maryland's claim to the area and to monitor any encroachments by the Virginians.[5]

In 1663, activists from Virginia persuaded the Virginia Assembly to declare that the Virginia-Maryland border to be 30 miles north of the Pocomoke Sound, at the mouth of the Wicomico River; and ordered the securing of allegiance of all settlers south of the Wicomico River - including the Annemessex and Manokin settlements - to Virginia.[6] In early October 1663, a militia of men from Accomac County, Virginia led by a Colonel Edmund Scarborough arrived at the Annemessex settlement and attempted to secure oaths of allegiance under threat of arrest and property confiscation. At this point, Scarborough was on a personal mission to arrest Stephen Horsey (Born on Isle of Wight, England and immigrated to Northampton, Virginia, USA 1643) the leader of the anti-tax movement and a vocal critic of the colonial government,who, along with fellow Northampton County residents William Coulborne,Randall Revell, and Ambrose Dixon signed the Tricesimo die Marty 1651. Colonel Scarborough and his force of forty mounted men arrived at Horsey's new residence on October 11, 1663, whereupon the Commands of the Assembly of Virginia against Horsey were presented. Horsey was "arrested" by Scarborough, but Horsey refused to accompany the party back to Virginia, instead declaring that he was going to remain in Maryland and maintain allegiance to the King and Lord Baltimore. Colonel Scarborough and his force of forty mounted men was summarily tossed out of the settlement.[7] Unable to secure oaths of allegiance from the inhabitants of the Annemessex settlement Scarborough and company moved on to the Manokin Settlement, where they were received much more favorably. Nonetheless, although they were willing to swear allegiance to the Virginia government, they were not willing to rise up and initiate any action against the Maryland government, and so Scarborough returned to Virginia having utterly failed in his quest to take over southern Somerset County for Virginia.[8]

Arriving in Calvert's Maryland on the Lower Eastern Shore, the new settlers had to go about establishing a government for their newly formed eighth county in the Province of Maryland out of the southern part of the previous Kent County, which had earlier been erected in 1642 as the Province's second county encompassing the entire Eastern Shore of the Chesapeake. Horsey was immediately recognized as a leader when he was selected to sit on the first county court which was given the job of running the new county. Charles Calvert appointed Stephen Horsey on December 11, 1665, along with Captain William Thorne, Mr. William Stevens, Mr. George Johnson, Mr. John Winder, Mr. James Jones and Mr. Henry Boston.[9] Horsey was able to count himself among the "Who's Who" list of the founding fathers of Somerset County. To add to this prestigious leadership role, Horsey found himself ensconced with the title of "Mister". Horsey sat as a regular member of the Somerset County Court through the winter and spring of 1666. It is not known how many times Horsey traveled across the Chesapeake Bay, but it is a fact that he traveled there in 1665 along with Captain Thorne and met with Charles Calvert, who personally swore in the two new county commissioners. From the beginning, Horsey established himself as a nonconformist and as someone willing to publicly stand up for his beliefs.[10] 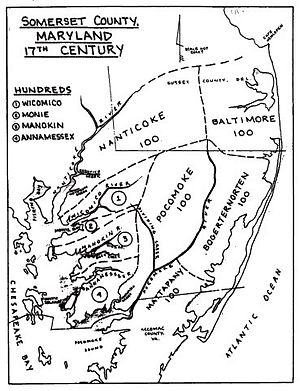 The Hundreds of Somerset County, Maryland as of 1669. Note the boundaries overlap with Sussex County, Delaware and Accomac County, Virginia.

The northernmost boundary of the county was also in dispute. Baltimore believed his Eastern Shore territory extended all the way up to the top of the peninsula, where the Delaware River meets the Bay. In the 1680s, William Penn claimed this territory as his own, however, on the basis of a conflicting deed. Penn, Baltimore, and their heirs began a protracted legal battle to determine the exact boundaries. Their compromise was to split the Delmarva Peninsula; however they disagreed as to whether the boundary line should be drawn at the location of Cape Henlopen or at Fenwick Island. Unlike the dispute of Somerset's southern border, there were few settlers in the frontier on either side to take issue. That boundary would finally be settled in 1763 when surveyors Charles Mason and Jeremiah Dixon incorporated the Transpeninsular Line as the definitive boundary between Delaware and Maryland.

The territory continued to attract new settlers, primarily from Virginia, and by 1666, the territory had met the requirements to become established as a county in the province with its own local government. On August 22, 1666, Lord Baltimore issued a proclamation establishing the new county, including the establishment of a complete civil and military organization. The proclamation established a sheriff and a military commander for the county, and five surveyors charged with laying out a highway to serve the county. In January 1667, the county administration laid out the five initial districts, designated as "Hundreds", into which the county would be divided. Additional hundreds were added as additional knowledge of the area was surveyed.[11]

Settlement of the county generally proceeded from the Chesapeake Bay eastward, and from old Accomac County northward. The original settlers in the first two settlements were Quakers and Anglicans; and both groups continued to grow from ongoing immigration from the northern portions of the Virginia colony. In the 1670s, Scottish and Irish Presbyterians began to immigrate to the county, some from Virginia, some from the British Isles. In December 1680, a prominent member of the county and professed Anglican, William Stevens of Rehoboth settlement, sent a request to the Presbytery of Laggan in northern Ireland to consider sending a Presbyterian minister to Somerset county; and the first Presbyterian (Reformed) minister, Reverend Francis Makemie, arrived in early 1683, quickly followed by a growing list of additional Irish Presbyterian ministers and missionaries. The towns of Rehoboth and Snow Hill along the Pocomoke River in the eastern (seaside) portion of Somerset County became Presbyterian centers in the County. The work of these Presbyterian ministers and missionaries eventually led to the organization of the Presbytery in Philadelphia in 1706, the forerunner of American Presbyterianism.

In 1689, partly as a result of the "Glorious Revolution" of 1688 in England exiled the Roman Catholic King James II and brought in by invasion the Dutch rulers William of Orange-Nassau and Mary of Orange (James II's Protestant daughter) later to become King William III, (1650-1702) and Queen Mary II. "Puritans" rose up in Maryland and deposed the Roman Catholic Maryland proprietary government. This action became known in Maryland as the "Protestant Revolution" of 1689, and resulted in the reversion of Lord Baltimore's proprietary charter and the conversion of the Province into a Royal colony (with a later government controlled by the king and his ministers), and later moving the founding capital of the Province from Catholic stronghold at St. Mary's City in southern Maryland on the Potomac and Chesapeake in 1694 to the more central, newly renamed Annapolis on the western shore of the Bay, opposite Kent Island. In 1692, the Provincial General Assembly established the Church of England as the "established church" of the Province, which put pressure on the Quakers and Presbyterians, whose numbers in the County began a slow decline until the American Revolution.[12]

As the English colonies expanded, many of the Native American Tribes left Maryland and joined with larger tribes in the Ohio River Valley or joined with their neighboring tribes to the north. Some of the descendants of the tribes of Maryland remained, intermarried with the Maryland colonists, and were integrated into Maryland society.

In 1742, Worcester County to the east and the ocean, was erected as the thirteenth county of Maryland by separation from Somerset County. A century and a quarter later, by 1867, portions of Somerset and Worcester Counties were ceded to create a 22nd jurisdiction, Wicomico County (as shortly, the state reorganized to create an additional 23rd and final county in the far mountainous west, Garrett County in 1872).

The county has a number of properties on the National Register of Historic Places.[13]

The State of Maryland Deal Island Wildlife Management Area, a protected area, is in the northwest quadrant of the county. It incorporates not only Deal Island but the tributaries of the Chesapeake Bay. It is 13,000 acres (5,300 ha).[15] It has over 9 miles (14 km) of flat trails.

There were 8,361 households out of which 38.30% had children under the age of 18 living with them, 46.1% were married couples living together, 15.1% had a female householder with no husband present, and 34.9% were non-families. 15.3% of all households were made up of individuals and 7.2% had someone living alone who was 65 years of age or older. The average household size was 2.37 and the average family size was 2.92.

According to the 2010 United States Census Bureau:

Somerset County is governed by county commissioners, the traditional form of county government in Maryland. Commissioners are elected to four-year terms; all commissioners' terms will expire in 2010.

Stephen Horsey was appointed the first Sheriff of Somerset County on August 22, 1666.

Rex Simpkins is the President of the County Commission; Charles F. Fisher is the Vice President.

The Census Bureau recognizes the following census-designated places (CDPs) in the county: