Admiral of the Fleet Sir Somerset Arthur Gough-Calthorpe GCB GCMG CVO (23 December 1865 – 27 July 1937), sometimes known as Sir Somerset Calthorpe, was a Royal Navy officer and a member of the Gough-Calthorpe family. After serving as a junior officer during the Fourth Anglo-Ashanti War, he became naval attaché observing the actions of the Imperial Russian Navy during the Russo-Japanese War and then went on to command an armoured cruiser and then a battleship during the early years of the 20th century.

During the First World War Gough-Calthorpe initially served as commander of the 2nd Cruiser Squadron of the Grand Fleet, then became Second Sea Lord and after that became Admiral commanding the Coastguard and Reserves. In the closing years of the War he served as Commander-in-Chief of the Mediterranean Fleet, in which capacity he signed the Armistice of Mudros on behalf of all the Allies, by which the Ottoman Empire accepted defeat and ceased hostilities. The Occupation of Constantinople began with the Allied fleet entering Constantinople in November 1918 and it was Gough-Calthorpe's flagship, HMS Superb, that led the way.

After the War Gough-Calthorpe served as British Commissioner in the Ottoman Empire during a time of considerable political instability associated with the partitioning of the Ottoman Empire and the allied intervention in the Russian Civil War.

Born the son of Lieutenant-General Somerset Somerset Gough-Calthorpe, 7th Baron Calthorpe and Eliza Maria Gough-Calthorpe (née Chamier),[1] Gough-Calthorpe joined the Royal Navy as a cadet in the training ship HMS Britannia on 15 January 1878.[2] Promoted to midshipman on 19 March 1880, he was appointed to the armoured cruiser HMS Northampton, flagship of the North America and West Indies Station later that year.[2] Promoted to sub-lieutenant on 19 March 1884, he joined the corvette HMS Rover in the Training Squadron in September 1885 and, after further promotion to lieutenant on 19 March 1886, he transferred to the battleship HMS Colossus in June 1886.[2] After attending the torpedo school HMS Vernon, he joined the directing staff there in 1890 and was then deployed to Hong Kong on torpedo duties in August 1891 before rejoining the directing staff at HMS Vernon in January 1894.[2] He became torpedo officer in the cruiser HMS St George on the Cape of Good Hope and West Coast of Africa Station in October 1894 and saw action with naval brigades during the Fourth Anglo-Ashanti War.[2]

Promoted to commander on 1 January 1896,[3] Gough-Calthorpe became Executive Officer in the armoured cruiser HMS Imperieuse, flagship of the Pacific Station, in March 1896.[4] After another tour at HMS Vernon, he became commanding officer of the torpedo gunboat HMS Halcyon in the Mediterranean Fleet in September 1900.[4] He went on to be commanding officer of the cruiser HMS Pandora during propeller trials at Portsmouth in July 1901,[5] and, having been promoted to captain on 1 January 1902[6] and having attended a course at the Royal Naval College, Greenwich,[7] he became naval attaché observing the actions of the Imperial Russian Navy during the Russo-Japanese War.[8] He became commanding officer of the armoured cruiser HMS Roxburgh in November 1905 and then, having been appointed a Member of the Royal Victorian Order on 25 September 1906,[9] he became commanding officer of the battleship HMS Hindustan in December 1907.[4] He then became Captain of the Fleet for the Home Fleet in the battleship HMS Dreadnought in December 1909.[4] He was advanced to Commander of the Royal Victorian Order on 2 August 1910.[10] Promoted to rear-admiral on 27 August 1911[11] and, having been appointed a Companion of the Order of the Bath on 27 September 1912,[12] he became second-in-command of the 1st Battle Squadron, with his flag in the battleship HMS St Vincent, in December 1912.[4] 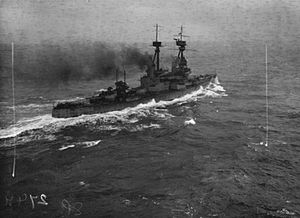 The Battleship, HMS Superb, which, as Gough-Calthorpe's flagship, led the Allied fleet that steamed into Constantinople in November 1918

Gough-Calthorpe became commander of the 2nd Cruiser Squadron of the Grand Fleet, with his flag in the armoured cruiser HMS Shannon, in July 1914 on the outbreak of the First World War.[4] Advanced to Knight Commander of the Order of the Bath on 1 January 1916,[13] he became Second Sea Lord in July 1916 and Admiral commanding the Coastguard and Reserves in December 1916.[4] Promoted to vice-admiral on 26 April 1917,[14] he became Commander-in-Chief, Mediterranean Fleet, with his flag in the battleship HMS Superb, in July 1917.[4] In that capacity he established a complex convoy system to protect British and allied shipping at sea in the Mediterranean from attack by enemy submarines.[1] 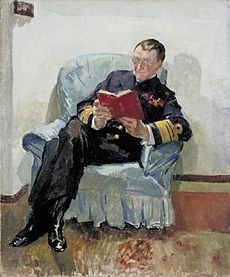 He went on to sign the Armistice of Mudros on behalf of all the Allies on 30 October 1918, by which the Ottoman Empire accepted defeat and ceased hostilities.[4] Georges Clemenceau, Prime Minister of France, complained that Admiral Dominique-Marie Gauchet had not been present at the treaty signing but the British Government gave Gough-Calthorpe its full backing.[4] When the Allied fleet steamed into Constantinople in November 1918, it was Gough-Calthorpe's flagship, HMS Superb, that led the way.[4]

Gough-Calthorpe became British Commissioner in the Ottoman Empire at the end of the War during a time of considerable political instability associated with the partitioning of the Ottoman Empire and the allied intervention in the Russian Civil War.[4] Appointed a Knight Grand Cross of the Order of St Michael and St George on 1 January 1919[15] and promoted to full admiral on 31 July 1919,[16] he became Commander-in-Chief, Portsmouth in April 1920.[17] He also became naval representative to the Permanent Armaments Commission of the League of Nations in July 1920.[18] 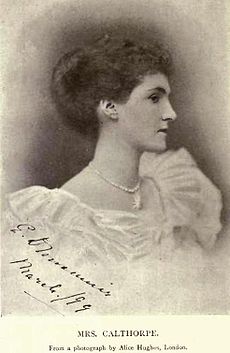 Gough-Calthorpe married Effie Dunsmuir, daughter of Hon. Robert Dunsmuir, of Craigdarroch Castle, Victoria, British Columbia, and his wife, Joanna, daughter of Alexander White, of Kilmarnock, Scotland at St George's, Hanover Square in London in March 1900.[24] They had no children.[1]