The Song of Songs, also known as the Song of Solomon, the Canticle of Canticles, or simply Canticles (Hebrew: שִׁיר הַשִּׁירִים Šîr HašŠîrîm ; Greek: ᾎσμα ᾈσμάτων asma asmaton, both meaning "song of songs"), is one of the megillot (scrolls) of the Ketuvim (the "Writings", the last section of the Tanakh or Hebrew Bible), and the fifth of the "wisdom" books of the Christian Old Testament.[1]

In modern Judaism, the Song is read on the Sabbath during the Passover, which marks the beginning of the grain harvest as well as commemorating the Exodus from Egypt. Jewish tradition reads it as an allegory of the relationship between God and Israel.[5] Christian tradition, in addition to appreciating the literal meaning of a romantic song between man and woman, has read the poem as an allegory of Christ (the bridegroom) and his Church (the bride).[6] 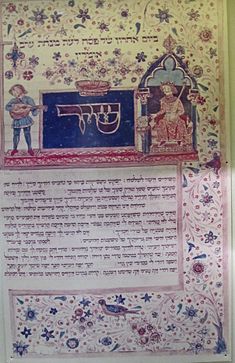 There is widespread consensus that, although the book has no plot, it does have what can be called a framework, as indicated by the links between its beginning and end.[7] Beyond this, however, there appears to be little agreement: attempts to find a chiastic structure have not been compelling, and attempts to analyse it into units have used differing methods and arrived at differing results.[8] The following must therefore be taken as indicative rather than determinative:

The introduction calls the poem "the song of songs", a superlative construction commonly used in the Scripture to show it as the greatest and most beautiful of all songs (as in Holy of Holies).[10] It begins with the woman's expression of desire for her lover and her self-description to the "daughters of Jerusalem". She says she is "black" because she had to work in the vineyards and got burned by the sun. A dialogue between the lovers follows: the woman asks the man to meet; he replies with a lightly teasing tone. The two compete in offering flattering compliments ("my beloved is to me as a cluster of henna blossoms in the vineyards of En Gedi", "an apple tree among the trees of the wood", "a lily among brambles", while the bed they share is like a forest canopy). The section closes with the woman telling the daughters of Jerusalem not to stir up love such as hers until it is ready.[11]

The woman recalls a visit from her lover in the springtime. She uses imagery from a shepherd's life, and she says of her lover that "he pastures his flock among the lilies".[11]

The woman again addresses the daughters of Jerusalem, describing her fervent and ultimately successful search for her lover through the night-time streets of the city. When she finds him she takes him almost by force into the chamber in which her mother conceived her. She reveals that this a dream, seen on her "bed at night" and ends by again warning the daughters of Jerusalem "not to stir up love until it is ready".[11]

The next section reports a royal wedding procession. Solomon is mentioned by name, and the daughters of Jerusalem are invited to come out and see the spectacle.[11]

The man describes his beloved: Her hair is like a flock of goats, her teeth like shorn ewes, and so on from face to breasts. Place-names feature heavily: her neck is like the Tower of David, her smell like the scent of Lebanon. He hastens to summon his beloved, saying that he is ravished by even a single glance. The section becomes a "garden poem", in which he describes her as a "locked garden" (usually taken to mean that she is chaste). The woman invites the man to enter the garden and taste the fruits. The man accepts the invitation, and a third party tells them to eat, drink, "and be drunk with love".[11]

The woman tells the daughters of Jerusalem of another dream. She was in her chamber when her lover knocked. She was slow to open, and when she did, he was gone. She searched through the streets again, but this time she failed to find him and the watchmen, who had helped her before, now beat her. She asks the daughters of Jerusalem to help her find him, and describes his physical good looks. Eventually, she admits her lover is in his garden, safe from harm, and committed to her as she is to him.[11]

The man describes his beloved; the woman describes a rendezvous they have shared. (The last part is unclear and possibly corrupted.)[11]

The people praise the beauty of the woman. The images are the same as those used elsewhere in the poem, but with an unusually dense use of place-names, e.g., pools of Hebron, gate of Bath-rabbim, tower of Damascus, etc. The man states his intention to enjoy the fruits of the woman's garden. The woman invites him to a tryst in the fields. She once more warns the daughters of Jerusalem against waking love until it is ready.

The woman compares love to death and sheol: love is as relentless and jealous as these two, and cannot be quenched by any force. She summons her lover, using the language used before: he should come "like a gazelle or a young stag upon the mountain of spices".[11]

The Song offers no clue to its author or to the date, place or circumstances of its composition.[12] The superscription states that it is "Solomon's", but even if this is meant to identify the author, it cannot be read as strictly as a similar modern statement.[13] The most reliable evidence for its date is its language: Aramaic gradually replaced Hebrew after the end of the Babylonian exile in the late 6th century BCE, and the evidence of vocabulary, morphology, idiom and syntax clearly points to a late date, centuries after King Solomon to whom it is traditionally attributed.[14]

It has long been recognised that the Song has parallels with the pastoral idylls of Theocritus, a Greek poet who wrote in the first half of the 3rd century BCE;[15] against this, it clearly shows the influence of Mesopotamian and Egyptian love-poetry. It appears closer to Egyptian love-poetry from the first half of the 1st millennium than to Greek parallels from the last.[16][17] As a result of these conflicting signs, speculation ranges from the 10th to the 2nd centuries BCE,[12] with the cumulative evidence supporting a later rather than an earlier date.[18]

The unity (or lack thereof) of the Song continues to be debated. Those who see it as an anthology or collection point to the abrupt shifts of scene, speaker, subject matter and mood, and the lack of obvious structure or narrative. Those who hold it to be a single poem point out that it has no internal signs of composite origins, and view the repetitions and similarities among its parts as evidence of unity. Some claim to find a conscious artistic design underlying it, but there is no agreement among them on what this might be. The question therefore remains unresolved.[19]

The setting in which the poem arose is also debated.[20] Some academics posit a ritual origin in the celebration of the sacred marriage of the god Tammuz and the goddess Ishtar.[21] Whether this is so or not, the poem seems to be rooted in some kind of festive performance.[20] External evidence supports the idea that the Song was originally recited by different singers representing the different characters, accompanied by mime.[22]

The Song was accepted into the Jewish canon of scripture in the 2nd century CE, after a period of controversy in the 1st century. It was accepted as canonical because of its supposed authorship by Solomon and based on an allegorical reading where the subject-matter was taken to be not sexual desire but God's love for Israel.[23]

It is one of the overtly mystical Biblical texts for the Kabbalah, which gave esoteric interpretation on all the Hebrew Bible. Following the dissemination of the Zohar in the 13th century, Jewish mysticism took on a metaphorically anthropomorphic erotic element, and Song of Songs is an example of this. In Zoharic Kabbalah, God is represented by a system of ten sephirot emanations, each symbolizing a different attribute of God, comprising both male and female. The Shechina (indwelling Divine presence) was identified with the feminine sephira Malchut, the vessel of Kingship. This symbolizes the Jewish people, and in the body, the female form, identified with the woman in Song of Songs.

Her beloved was identified with the male sephira Tiferet, the "Holy One Blessed be He", central principle in the beneficent Heavenly flow of Divine emotion. In the body, this represents the male torso, uniting through the sephira Yesod of the male sign of the covenant organ of procreation.

Through beneficent deeds and Jewish observance, the Jewish people restore cosmic harmony in the Divine realm, healing the exile of the Shechina with God's transcendence, revealing the essential Unity of God. This elevation of the World is aroused from Above on the Sabbath, a foretaste of the redeemed purpose of Creation. The text thus became a description, depending on the aspect, of the creation of the world, the passage of Shabbat, the covenant with Israel, and the coming of the Messianic age. "Lecha Dodi", a 16th-century liturgical song with strong Kabbalistic symbolism, contains many passages, including its opening two words, taken directly from Song of Songs.

In modern Judaism, certain verses from the Song are read on Shabbat eve or at Passover to symbolize the love between the Jewish People and their God. Solomon B. Freehof writes of the Song:

As revealed in numerous talmudic passages, in the Targum and in the midrash, this biblical book is interpreted as referring to God's love for Israel. This interpretation (evidently the one ascribed to the Keneset Hagdola in Abot d'R. Nathan, Schechter, A #1) soon became official. In fact, anyone quoting verses from the Song of Songs giving them the literal meaning was declared a heretic who had forfeited his portion in Paradise (Tos. Sanh. XII, 10). This symbolic interpretation of the book was, with some re-interpretation, carried over into Christianity and there, too, it became official.[24]

In modern Judaism, the Song is read on the Sabbath during the Passover, which marks the beginning of the grain harvest as well as commemorating the Exodus from Egypt. Jewish tradition reads it as an allegory of the relationship between God and Israel.[5]

Christians admitted the canonicity of the Song of Songs from the beginning, but after Jewish exegetes began to read the Song allegorically, as having to do with God's love for his people, Christian exegetes followed suit, treating the love that it celebrates as an analogy for the love between God and the Church.[6] Over the centuries the emphasis of interpretation shifted, the 11th century adding a moral element and the 12th century understanding the Bride as the Virgin Mary, each new reading absorbing rather than simply replacing earlier ones, so that the commentary became ever more complex, with multiple layers of meaning.[27] This approach leads to conclusions not found in the more overtly theological books of the Bible, which consider the relationship between God and man as one of inequality.[28] In contrast, reading the Song of Songs as an allegory of God's love for his Church suggests that the two partners are equals, bound in a freely consented emotional relationship.[28]

In modern times, the poem has attracted the attention of feminist Biblical critics. The Feminist Companion to the Bible series, edited by Athalya Brenner, has two volumes (1993, 2001) devoted to the Song, the first of which was actually the first volume of the whole series. Phyllis Trible had earlier published "Depatriarchalizing in Biblical Interpretation" in 1973, offering a reading of the Song with a positive representation of sexuality and egalitarian gender relations, which was widely discussed, notably (and favourably) in Marvin Pope's major commentary for the Anchor Bible.

Song of Songs in Hebrew