Song of the sea

From Infogalactic: the planetary knowledge core
(Redirected from Song of the Sea)
Jump to: navigation, search
For other uses, see Song of the Sea (disambiguation). 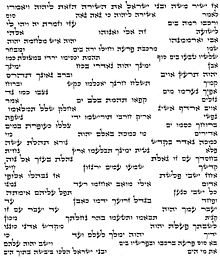 Song of the Sea from a Sefer Torah

The Song of the Sea (Hebrew: שירת הים‎, Shirat HaYam, also known as Az Yashir Moshe) is a poem that appears in the Book of Exodus of the Hebrew Bible, at Exodus 15:1–18. It is followed in verses 20 and 21 by a much shorter song sung by Miriam and the other women. The Song of the Sea was reputedly sung by the Israelites after their crossing the Red Sea in safety, and celebrates the destruction of the Egyptian army during the crossing, and looks forward to the future conquest of Canaan.

The poem is included in Jewish prayer books, and recited daily in the morning shacharit services. The poem also comprises the first ode or hymn of the Eastern Orthodox canon, where it is known as the Song or Ode of Moses.[1] It is also used in the Roman Catholic, Eastern Orthodox, and other Christian liturgies[2] at the Easter Vigil when the history of salvation is recounted. These traditions follow Revelation 15:3 by calling it the "Song of Moses" (not to be confused with the Song of Moses in Deuteronomy).

The poem forms part of parshat Beshalach. It is one of only two sections of the Sefer Torah that is written with a different layout from the normal simple columns. The other section written differently is the Song of Moses at the end of Deuteronomy, in parshat Ha'azinu.

The Song of the Sea is noted for its archaic language. It is written in a style of Hebrew much older than that of the rest Exodus. Most scholars consider it the oldest surviving text describing the Exodus, dating to the pre-monarchic period. An alternative is that it was deliberately written in an archaic style, a literary device not unknown.[3]

Ketuba of the Seventh Day of Pesah

The Ketubá del Seten Dia de Pesah (or כתובה ליום השביעי של פסח - Ketuba Le-yom Ha-shebi`i shel Pesah) is a liturgical poem in Ladino, describing Pharaoh's defeat in the Sea of Reeds. Most Jewish communities sing this poem on 21 Nisan, the seventh day of Passover. According to Jewish tradition, this is the day on which Pharaoh's army was drowned in the Sea of Reeds, and the Israelite people sang the Song of the Sea in gratitude for this victory.

Presumably, this text is called a ketuba ("marriage contract") because the relationship between God and the Jewish people is traditionally described as a marriage, and the splitting of the sea is considered to be an important event leading to that marriage, which ultimately took place 42 days later, at Mt. Sinai.

A tune for the Ladino poem (along with the entire text itself) can be found in Isaac Levy's Anthology of Sepharadic Hazzanut.[5]

The following settings exist for the Song of the Sea in the Catholic tradition:

The following setting exists for the Song of the Sea in the Protestant tradition: