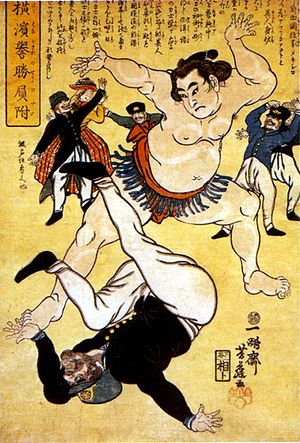 An 1861 image expressing the Jōi (攘夷, "Expel the Barbarians") sentiment.

Sonnō jōi (尊皇攘夷, Revere the Emperor, expel the barbarians?) was a Japanese political philosophy and a social movement derived from Neo-Confucianism; it became a political slogan in the 1850s and 1860s in the movement to overthrow the Tokugawa bakufu, during the Bakumatsu ("End of Bakufu") period.

During the Warring States period of China, Chancellor Guan Zhong of Qi initiated a policy known as Zunwang Rangyi (尊王攘夷, "Revere the King, Expel the Barbarians"), in reference to the Zhou kings.[1] Adopting and adhering to it, Duke Huan of Qi assembled the Chinese feudal lords to strike down the threat of barbarians from China.[2] For it, Confucius himself praised Guan Zhong for the preservation of Chinese civilization through the example of the contrast in the hairstyles and clothing styles between them and barbaric peoples.[1] Through the Analects of Confucius, the Chinese expression came to be transmitted to Japan as sonnō jōi.[3]

In Japan, the origin of the philosophy can be traced to works by 17th century Confucian scholars Yamazaki Ansai and Yamaga Sokō, who wrote on the sanctity of the Japanese Imperial house and its superiority to the ruling houses of other nations. These ideas were expanded by Kokugaku scholar Motoori Norinaga, and seen in Takenouchi Shikibu's theory of absolute loyalty to the Emperor (尊皇論 sonnōron), that implied that less loyalty should be given to the ruling Tokugawa shogunate.

Mito domain scholar Aizawa Seishisai introduced term sonnō jōi into modern Japanese in his work Shinron in 1825, where sonnō was regarded as the reverence expressed by the Tokugawa bakufu to the emperor and jōi was the proscription of Christianity.

With the increasing number of incursions of foreign ships into Japanese waters in the late 18th and early 19th century, the national seclusion policy came increasingly into question. The jōi (expel the barbarians) portion of sonnō jōi, changed into a reaction against the Treaty of Kanagawa, which opened Japan to foreign trade in 1854. Under military threat from Commodore Matthew Perry's so-called "black ships", the treaty was signed under duress and was vehemently opposed in samurai quarters. The fact that the Tokugawa bakufu was powerless against the foreigners despite the will expressed by the Imperial court was taken as evidence by Yoshida Shōin and other anti-Tokugawa leaders that the sonnō (revere the Emperor) portion of the philosophy was not working, and that the bakufu must be replaced by a government more able to show its loyalty to the Emperor by enforcing the Emperor’s will.

The philosophy was thus adopted as a battle cry of the rebellious provinces of Chōshū and Satsuma. The Imperial court in Kyoto sympathized with the movement. The Emperor Kōmei personally agreed with such sentiments, and – breaking with centuries of imperial tradition – began to take an active role in matters of state: as opportunities arose, he fulminated against the treaties and attempted to interfere in the shogunal succession. His efforts culminated in March 1863 with his "Order to expel barbarians" (攘夷勅命). Although the Shogunate had no intention of enforcing the order, it nevertheless inspired attacks against the Shogunate itself and against foreigners in Japan: the most famous incident was that of the English trader Charles Lennox Richardson, for whose death (which was the result of allegedly disrespecting a daimyo) the Tokugawa government had to pay an indemnity of one hundred thousand pounds sterling.[4] Other attacks included the shelling of foreign shipping in Shimonoseki.[5] Masterless samurai (ronin) rallied to the cause, assassinating Shogunate officials and Westerners.

But this turned out to be the zenith of the sonnō jōi movement, since the Western powers responded by demanding heavy reparations and then bombarding the Satsuma capital of Kagoshima when these were not forthcoming. While this incident showed that Japan was no match for Western military powers, it also served to further weaken the shogunate, permitting the rebel provinces to ally and overthrow it in the Meiji Restoration.

The slogan itself was never actually a government or rebel policy; for all its rhetoric, Satsuma in particular had close ties with the West, purchasing guns, artillery, ships and other technology.

After the symbolic restoration of the Meiji Emperor, the sonnō jōi slogan was replaced with fukoku kyōhei (富国強兵), or "rich country, strong military" (enrich the nation, strengthen the armies), the rallying call of the Meiji Era and the seed of its actions during World War II.