A sope (Spanish pronunciation: [ˈsope]) is a traditional Mexican dish originating in the central and southern parts of Mexico, where it was sometimes first known as pellizcadas. It is an antojito which at first sight looks like an unusually thick tortilla with vegetables and meat toppings. The base is made from a circle of fried masa (ground maize soaked in lime, also used as the basis for tamales and tortillas) with pinched sides. This is then topped with refried black beans and crumbled cheese, lettuce, onions, red or green sauce (salsa, made with chiles or tomatillos respectively), and acidified cream. Sometimes other ingredients (mostly meat) are also added to create different tastes and styles of sopes. Sopes are roughly the size of a fist.

The sope has spread throughout all Mexico's territory, and there are now thousands of regional variants.

While the pinched sides of the sope are its most distinctive characteristic, there are also flat sopes resembling a thick tortilla or a tostada. However, though both tostadas and sopes are fried, the tostada is thin and fried until it becomes crunchy and fragile, while the sope is much thicker and fried only until the exterior surface is cooked. The sope therefore has a soft, slightly pliable texture. The sope's thickness is meant to support its toppings, and the frying of its exterior surface adds resistance to the moisture of the ingredients.

The most common variation of the sope involves simply adding chicken and is widely known as a "sope de pollo". Sopes topped with beef are also a common variation and are typically slightly larger than sopes de pollo.

In the northern regions of Mexico, sopes are often prepared without vegetables, substituting black beans, spicy salsa and longaniza or chorizo instead.

In Acapulco, Guerrero, sopes are unusually small in size, so they are called "sopecitos" instead, and are fried in the same oil used to fry seafood, which gives the sopecitos a unique taste. The sopecitos are made of beans and salsa only; no other ingredients are added.

In Oaxaca, sopes sometimes are prepared using chapulines (roasted grasshoppers) as topping. There's also an extremely large dish similar to a giant sope or a giant tostada which is the traditional food of reference in Oaxaca known as Tlayuda.

The sope has been adopted and adapted to the local tastes of all Mexico's regions. This resulted in the creation of many traditional food specialties which may appear to resemble the sope, but are considered a different dish.

The most common variation of the sope is the huarache, which is prepared in almost the same manner. However, the huarache normally is two or three times as large as a sope and has a characteristic oblong shape. Huaraches are usually topped with rib, chicken or beefsteak meat. The name "huarache" is derived from the shape of the masa, similar to the popular sandals.

The tlacoyo is a completely different traditional Mexican dish which must not be confused with a Sope, but in some regions has started to be used in a similar way, as a base on top of which are placed the same ingredients used for sopes. A tlacoyo is an oval fried or toasted cake made of masa, torpedo shaped and a lot fatter, since it is filled with beans or cheese.

Since it is similar in shape to a huarache (but smaller), and is made of the same corn as the sope and is even thicker (so it has more resistance to humid foods), Mexican street vendors decided to sell it adding toppings on it, as an alternative to the sope. However, note the traditional Tlacoyo it is supposed to be consumed without any toppings on it, and is on this form in which is mostly found on the streets.

A gordita is a Mexican food similar to the tlacoyo; the difference between tlacoyos and gorditas is the form of gorditas, rounded. Gorditas can be made with clotted cream, called nata in Mexico. (In other countries, nata is the usual cream.) Their taste is sweet.

Other types of gorditas are savory and are stuffed with hot salsa or refried beans. 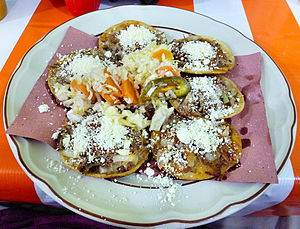 Garnachas from the Isthmus of Tehuantepec region of Oaxaca

Garnachas are a small corn tortilla fried with shredded meat, crumbled dried Queso Oaxaca, lettuce or pickled cabbage, and salsa. In many instances, Garnachas may only have chopped onion and salsa on top. Similar in appearance to sopes, they are a regional specialty from the Isthmus of Tehuantepec region of the Mexican state of Oaxaca.[1][2]

Oaxacan memelas are a local name for the identical sopes that are served in other parts of Mexico, just made with different toppings. Memelas are corn masa cakes topped with beans, salsa, shredded cabbage, mole negro, guacamole and cheese. Memelas have been served at Oaxacan/Mexican restaurants in the United States since the 1990s. In Puebla, memelas are often served by topping the fried masa with sauce - red sauce on one side and green sauce on the other side which is called estilo bandera. Instead of meat, memelas in Puebla are served with sour cream, crumbled cheese, and diced onions on top of the red and green sauces.

A chalupa is a tostada platter in Mexican cuisine, not a sope, but its preparation method is quite similar. It is a specialty of south-central Mexico, such as the states of Puebla, Guerrero and Oaxaca. It is made by pressing a thin layer of masa dough around the outside of a small mold and deep frying to produce a crisp shallow corn cup. It is filled with various ingredients such as shredded chicken, pork, chopped onion, chipotle pepper, red salsa, and green salsa.

The chalupa is usually longer than a sope, resembling the canoe-like boat that is its namesake, although there are also small versions (named chalupitas) available in other regions. An Americanized form is sold in Taco Bell restaurants, filled with ground meat, steak or chicken, (and even bacon has also been available in past limited offers) and topped with cheese, lettuce, sour cream and salsa (also comes in Baja style, replacing the sour cream with a Baja sauce), resembles an American taco inside but is wrapped with deep-fried wheat flatbread.

Yucatecan food is very different from what most people would consider "Mexican" food, since includes influences from the local Mayan culture mixed with European cuisine influence.

Salbutes and panuchos are the Yucatecan variant of the sope. Salbutes are soft, cooked tortillas with lettuce, tomato, turkey, and avocado on top. Panuchos feature tortillas partially fried as a sope base, but filled with black beans and topped with turkey or chicken, lettuce, avocado and pickled onions. Habanero chiles accompany most dishes, either in solid or puréed form, along with fresh limes or lime juice.