Sophia Dorothea of Celle (15 September 1666 – 13 November 1726) was the repudiated wife of George I of Great Britain and mother of George II. The union with her first cousin was an arranged marriage of state, instigated by the machinations of his mother, Sophia of Hanover. She is best remembered for her alleged affair with Philip Christoph von Königsmarck that led to her being imprisoned in the Castle of Ahlden for the last thirty years of her life.

Sophia Dorothea was born on 15 September 1666, the only child of George William, Duke of Brunswick-Lüneburg by his long term mistress, Eleonore d'Esmier d'Olbreuse (1639–1722), Countess of Williamsburg, a Huguenot lady, the daughter of Alexander II d'Esmiers, Marquess of Olbreuse. George William eventually married his daughter's mother officially in 1676 (they had been married morganatically previously).

When told of the change in plans and her new future husband, Sophia Dorothea shouted that "I will not marry the pig snout!" (a name he was known by in Hanover), and threw a miniature of George Louis brought for her by Duchess Sophia against the wall.[citation needed] Forced by her father, she fainted into her mother's arms on her first meeting with her future mother-in-law. She fainted again when presented to George Louis.

On 22 November 1682, in Celle, Sophia Dorothea married her cousin, George Louis. In 1705 he would inherit the Principality of Lüneburg after the death of his father-in-law and uncle, George William, Duke of Brunswick-Lüneburg, and in 1714 the Kingdom of Great Britain and the Kingdom of Ireland and became King George I of Great Britain through his mother, Duchess Sophia, a granddaughter of James VI and I.

The desire for the marriage was almost purely financial, as Duchess Sophia wrote to her niece Elizabeth Charlotte, "One hundred thousand thalers a year is a goodly sum to pocket, without speaking of a pretty wife, who will find a match in my son George Louis, the most pigheaded, stubborn boy who ever lived, who has round his brains such a thick crust that I defy any man or woman ever to discover what is in them. He does not care much for the match itself, but one hundred thousand thalers a year have tempted him as they would have tempted anybody else."[1]

These feelings of contempt were shared by George Louis himself, who was oddly formal to his wife. Sophia Dorothea was frequently scolded for her lack of etiquette, and the two had loud and bitter arguments. Things seemed better after the birth of their first two children:

But George Louis acquired a mistress, Melusine von der Schulenburg, and started pointedly neglecting his wife. His parents asked him to be more circumspect with his mistress, fearful that a disruption in the marriage would disrupt the payment of the hundred thousand thalers, but he responded by going out of his way to treat his wife brutally. 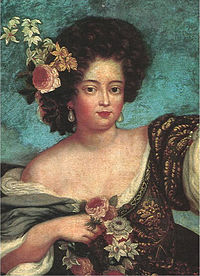 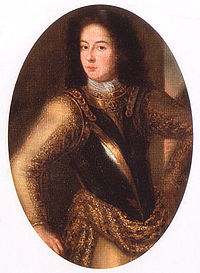 It was in these circumstances that Sophia Dorothea re-made the acquaintance of Swedish count Philip Christoph von Königsmarck. The two had first met in Celle when he was sixteen. They flirted innocently, and traced their names on the palace windows with the words "Forget me not". On 1 March 1688 he reminded her of their previous acquaintance, and the two renewed it. George Louis' younger brothers loved the count and brought him to Sophia Dorothea's salon in the evening to cheer her up. For the two years he stayed in Hanover, there was no reason to believe their relationship was anything but platonic. He left for a military expedition to the Peloponnese in 1690 — it was a disaster. On his return, the relationship between him and Sophia Dorothea intensified. They began sending each other love letters which suggest that their relationship was consummated.

In 1692, the early letters were shown to the newly appointed Elector Ernest Augustus (Sophia Dorothea's father-in-law). Since a scandal might have threatened his new status, the elector sent Königsmarck to fight with the Hanoverian army against Louis XIV. Other soldiers were given leave to visit Hanover, but he was not. One night Königsmarck deserted his post and rode for six days to visit Hanover. The day after arriving, he called on Field Marshal Heinrich and, confessing his breach of duty, begged for leave to stay in Hanover. It was agreed, though Heinrich suggested that the affair be ended or that Königsmarck leave the country. Ernest Augustus exiled Königsmarck.

George Louis criticised his wife over her affair, and she criticised him for his. The argument escalated to the point that George Louis threw himself on Sophia Dorothea and started tearing out her hair and strangling her, leaving purple bruise marks. He was pulled off her by her attendants.

Königsmarck presumably was killed while assisting her in a futile attempt to escape from Hanover. In 1694 he disappeared (several guards and the Countess Platen confessed on their deathbeds to being involved in his death). Sophia Dorothea was divorced by George Louis who then imprisoned her at the Castle of Ahlden. She remained in captivity until her death more than thirty years later on 13 November 1726. Sophia Dorothea is sometimes referred to as the "princess of Ahlden."

Sophia Dorothea's infidelity to her husband is not absolutely proven, as it is possible that the letters which purport to have passed between Königsmarck and herself are forgeries. George II was very disturbed by the imprisonment of his mother, and it was one of a number of reasons that contributed to the relationship of mutual hatred between him and his father.

Sophia Dorothea became ill in August 1726 and had to stay in bed, which she never left again. Before dying, Sophia Dorothea wrote a letter to her husband, cursing him from beyond the grave. Her cause of death was liver failure and gallbladder occlusion due to 60 stones.[citation needed] Sophia Dorothea was 60 years old and had spent 33 of these years imprisoned.

George would not allow mourning in Hanover or London. He was furious when he heard that his daughter's court in Berlin wore black. Sophia Dorothea's body was put into a casket and was deposited in the castle's cellar. It was quietly moved to Celle in May 1727 to be buried beside her parents in the Stadtkirche. George I died four weeks later, presumably shortly after receiving his deceased wife's final letter.

Sophia Dorothea's affair and its tragic outcome is the basis of the 1948 British film Saraband for Dead Lovers. She is played by Joan Greenwood.