From Infogalactic: the planetary knowledge core
(Redirected from Sophia Frederica of Mecklenburg-Schwerin)
Jump to: navigation, search

On 21 October 1774 in Copenhagen, she married Hereditary Prince Frederick of Denmark and Norway, the son of King Frederick V of Denmark and his second wife Juliane Marie of Brunswick-Wolfenbüttel, who was the regent in Denmark between 1772 and 1784. She was sixteen years old when she was married.

Sophia Frederica, known as Sofie Frederikke af Mecklenburg-Schwerin in Denmark, was described as jolly, charming and intelligent. She had a hard time in the beginning adapting to her new, stiffer environment, but became quite popular. During the first ten years of her marriage (1774-1784), she gave birth only three daughters, the eldest two were stillborn and the third lived only five months;[1][2][3] it was only in 1786 when she had the first of her living children, the future King Christian VIII.

It is said she was disappointed when she met her husband for the first time, but they came to be fond of each other, although they both supposedly took lovers; her husband had a mistress, her companion Caja Hviid, while the father of Sophia Frederica's children was rumored to be her husband's adjutant, Frederik von Blücher.[4] It was said that the harmony of their marriage was based on mutual understanding. The harmonious friendship between the spouses created a fear that Sophia Frederica's influence over her husband would lead to her interfering in politics.

She died in Sorgenfri Palace. 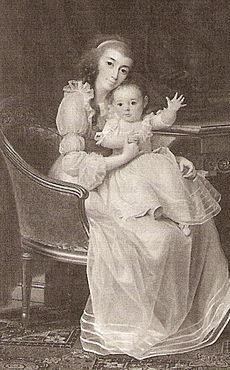 Sophia Frederica, Hereditary Princess of Denmark and Norway, with her daughter Juliane, by Jens Juel, 1790.

Sophia Frederica and Prince Frederick had the following children: