Sophia Hayden Bennett (October 17, 1868 – February 3, 1953) was the first female graduate of the four-year program[1] in architecture at Massachusetts Institute of Technology.[2][3][4]

Bennett was born Sophia Gregoria Hayden[1] in Santiago, Chile. Her mother, Elezena Fernandez, was from Peru, and her father, George Henry Hayden, was an American dentist from Boston.[5] Bennet had a sister and two brothers.[6] When she was six she was sent to Jamaica Plain, a suburb of Boston, to live with her paternal grandparents, George and Sophia Hayden, and attended the Hillside School. While attending West Roxbury High School (1883–1886) she found an interest for architecture. After graduation Bennett's family moved to Richmond, Virginia, but she returned to Boston for college.[1]:94 She graduated from MIT in 1890 with a degree in architecture, with honors.

After completing her studies Hayden may have had a hard time finding an entry level apprentice position as an architect because she was a woman so she accepted a position as a mechanical drawing teacher at a Boston high school.[2] 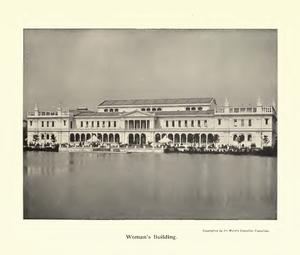 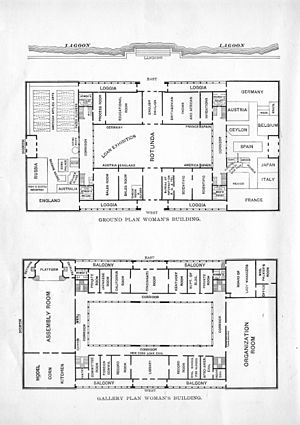 Ground Plan and Gallery Plan of the The Woman's Building

Bennett's entry won first prize out of a field of thirteen entries submitted by trained female architects.[1]:94 She received $1,000 for the design, when male architects earned $10,000 for similar buildings.[10]

During construction, Hayden's design principles were compromised by incessant changes demanded by the construction committee, spearheaded by socialite Bertha Palmer, who eventually fired Bennett from the project.[2][11] Bennett appeared at the Inaugural Celebration and had published accounts of support by her fellow architects.[12]

Her frustration eventually was pointed to as typifying women's unfitness for supervising construction, although many architects sympathized with her position and defended her. In the end the rifts were made up, perhaps, and Hayden's building received an award for "Delicacy or style, artistic taste, and geniality and elegance of the interior." Within a year or two, virtually all the Fair buildings were destroyed. Frustrated with the way she had been treated, Hayden may or may not have decided to retire from architecture, but she did not work again as an architect.[2]

Although Bennett designed a memorial for women's clubs in the U.S. in 1894, it was never built.[6] She worked as an artist for years and lived a quiet life in Winthrop, Massachusetts. Bennett died at the Winthrop Convalescent Nursing Home in 1953 of pneumonia after suffering a stroke.[2][6]