Zoe Palaiologina (Greek: Ζωή Παλαιολογίνα), who later changed her name to Sophia Palaiologina (Russian: София Фоминична Палеолог; ca. 1440/49[1] – 7 April 1503), was a Byzantine princess member of the Imperial Palaiologos family, by marriage Grand Princess of Moscow as the second wife of Grand Prince Ivan III. Through her eldest son Vasili III, she was also the grandmother of Ivan the Terrible, the first Tsar of All the Russias.

Zoe's father was Thomas Palaiologos, Despot of Morea and younger brother of the last Byzantine Emperor, Constantine XI Palaiologos. Her mother was Catherine, the only legitimate daughter and heiress of Centurione II Zaccaria, the last independent Prince of Achaea and Baron of Arcadia.

The fall of the Byzantine Empire in 1453 was a turning point in Zoe's fate. Seven years later, in 1460, the Ottoman army duly attacked Morea and quickly breached the Hexamilion wall across the Isthmus of Corinth, which was too long to be effectively manned and defended by Thomas' forces. Thomas and his family escaped to Corfu and, then to Rome, where (already recognized as the legitimate heir to the Byzantine Empire by the Pope) he made a ceremonial entrance as Byzantine Emperor on 7 March 1461. Catherine, who remained in Corfu with her children, died there on 16 August 1462.

Zoe and her brothers remained in Corfu until 1465, when their dying father recalled them to Rome. Thomas Palaiologos died on 12 May 1465.[2]

Adopted by the Papacy after her father's death together with her brothers, her Greek name Zoe was changed to Sophia. Born into the Orthodox religion, it's possible that she was raised as a Catholic in Rome.[1] She spent the next years in the court of Pope Sixtus IV.

The care of the Imperial children was assigned to a famous scientist, Greek Cardinal Basilios Bessarion. Surviving letters of the Cardinal show the Pope followed the evolution and welfare of Sophia and her brothers: they received the amount of 3,600 crowns (in payments of 200 crowns per month for ther clothes, horses and servants, and an additional 100 crowns for the maintenance of a modest household, which included a doctor, a Latin teacher, a Greek teacher, a translator and one or two priests).

After the death of Thomas Palaeologus, his eldest son Andreas became the de jure Byzantine Emperor, but after sold his rights to several European monarchs he finally died in poverty. During the reign of Bayezid II, Manuel returned to Constantinople (now Istanbul) and remained at the mercy of the Sultan; according to some sources, he converted to Islam, raised a family and served in the Turkish Navy.

In 1466 the Venetian Republic invited King James II of Cyprus to ask for the hand of Sophia in marriage, but he refused. Around 1467, Pope Paul II offered Sophia's hand to a Prince Caracciolo. They were solemnly betrothed, but the marriage never took place.

Maria of Tver, the first wife of Grand Prince Ivan III of Moscow, died in 1467. This marriage only produced a son, Ivan the Young, born in 1458.

The marriage between Sophia and Ivan III was proposed by Pope Paul II in 1469, probably with the hope of strengthening the influence of the Catholic Church in Russia or the unification of the Orthodox and Catholic as was stipuladed in the Council of Florence. The motives of Ivan III for pursue this union were probably connected with the status and rights of the Greek princess over Constantinople. The idea of this marriage perhaps was born in the mind of Cardinal Bessarion.

The negotiations lasted for three years. Russian chronicles related the events as follows: 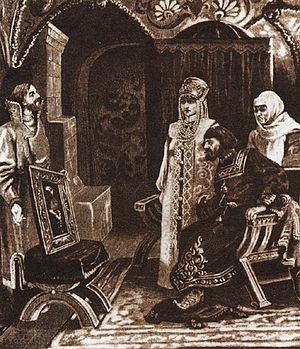 Even while traveling to Russian lands, became apparent that the Vatican plans to make Sophia their representant of Catholicism failed as was soon demonstrated when immediately after her wedding she returned to the faith of her ancestors. Papal Legate Anthony was unable to enter Moscow, carrying in front the Latin cross (Korsun cross).[4]

The formal wedding between Ivan III and Sophia took place at the Dormition Cathedral in Moscow on 12 November 1472. The ceremony was performed by Metropolitan Philip, although other sources states that was celebrated by Hosea, Abbot of Kolomna.[5][6]

In the Kremlin Museum are stored several items related to her. Among them a few precious icons, who previously where placed in the Annunciation Cathedral, whose frame is created, probably in Moscow. According to the inscriptions showed there, can be assumed that they are in her power she came from Rome.

For her in Moscow were built special mansions and gardens, but in 1493 they where burned, and during the fire was lost much of the treasure of the Grand Princess. In 1472, she was affected by the formal tributary gesture by which her spouse greeted the Mongolian representatives, and is believed to have convinced him to abandon the tributary relationship to the Mongols, which was completed in 1480.[1]

Sophia was apparently not obliged to follow the custom of traditional isolation which was expected of other Russian noble and royal women at the time; it is noted that she was not confined to the women's quarters, but greeted foreign representatives from Europe similarly as the queens of Western Europe.[1]

Before the invasion of Akhmad in 1480, Sophia, her children, household and treasury where sent firstly to Dmitrov and then on Belozersk; in the case, that Akhmad will finally take Moscow, she was advised to flee to further north to the sea. This precautions caused that Vissarion, Bishop of Rostov, warned the Grand Duke that the excessive attachment to his wife and children would be his destruction.[7]

The family returned to Moscow only in the winter. The Venetian ambassador Ambrogio Contarini says that in 1476 he had an audience with the Grand Duchess, who received him politely and kindly and respectfully asked about the Doge.

There is a legend associated with the birth of Sophia's eldest son, the future Vasily III: that during one of her pious trips to Trinity Lavra of St. Sergius, the Grand Princess had a vision of the Venerable Sergius of Radonezh, who "presented her the long-waited son between his arms"

Over time, the second marriage of the Grand Prince was one of the main sources of tension in the court, thanks to the "shrewd" character of the new Grand Princess,[1] and for the increased rumours that her husband let himself be directed by her suggestions.[1] It's thought that Sophia introduced grand Byzantine ceremonies and meticulous court etiquette in the Kremlin, the idea of Moscow as a Third Rome evidently pleasing her.

Soon emerged two parties into the court nobility, one of which supported the heir to the throne, Ivan the Young, and the second, who sided with Sophia. In 1476 the Venetian Ambrogio Contarini noted that the heir to the throne had lost the favor of his father, thanks to the intrigues of the Despina (title given to Sophia after her father); however, if existed any tension between father and son, this didn't excluded him from his rights, because since 1477 Ivan the Young was officially referred as the co-ruler of Ivan III.

Another source of tension in the Russian court appeared in January 1483, when Ivan the Young married. His wife was Ilincu, daughter of Stephen III the Great, Prince of Moldavia, who after her marriage took the name of Elena. The new wife of the heir soon became involved in the court intrigues, especially when on 10 October 1483 she gave birth a son, Dmitry. After the annexation of Tver in 1485, Ivan the Young was appointed Grand Prince of this domains by his father; thus, during all the 1480s Ivan's position as the rightful heir was quite strong.

The position of Sophia's supporters was less secured at that time. In particular, the Grand Princess was unable to obtain government posts to her relatives: her brother Andreas departed from Moscow with nothing, and her niece Maria (wife of Vasily Mikhailovich, Hereditary Prince of Verey-Belozersky) was forced to flee to Lithuania with her husband, an event who further undermined Sophia's position at court. According to sources, Sophia arranged the marriage of her niece with Prince Vasily in 1480, and in 1483 she gave to some jewelry who belonged to Ivan III's first wife. When Ivan the Young asked for this jewels(who logically wanted to gave his wife Elena as a gift), he discovered that are missing; outraged, he ordened a search. Prince Vasily didn't wait for expected punishment against him, and taking his wife fled to Lithuania. One direct consecuence of this episode was that Prince Michael of Verey-Belozersky, Vasily's father bequeathed his domains to the Grand Prince after his death, effectively desinherited his son.[8][9] Only in 1493 Sophia was able to obtain the pardon for her niece and her husband, but for unknown reasons they never returned.

However, by 1490 entered into force new circumstances. Ivan the Young became ill with gout. Sophia then wrote to a Venice doctor called Leon, who arrogantly promised Ivan III to cure the heir to the throne; Nevertheless, all efforts were fruitless, and on 7 March 1490 Ivan the Young died. The doctor was executed,[10] and in Moscow began rumors about Sophia, who allegedly poisoned the heir; according to Andrey Kurbsky, who wrote about this events almost 100 years later, these rumors are indisputable facts. Modern historians, however, refers to the hypothesis of the poisoning of Ivan the Young as unverifiable due to lack of sources.

In 1497, Sophia and her eldest son Vasili were allegedly involved in a plot to kill Prince Dmitry, son of Ivan the Young. Both were disgraced and probably banished from court.[11]

On 4 February 1498 at Dormition Cathedral in the atmosphere of great splendor, Prince Dmitry was crowned Grand Prince and co-ruler of his grandfather. Sophia and her son Vasili were not invited; only in mid-1499 they were restored in favor and returned to court.

However, on 11 April 1502 the dynastic struggle came to an end. According to chronicles, Ivan III suddenly changed his mind and imprisoned both Grand Prince Dmitry and his mother Elena, and placed them under house arrest surrounded by guards. Three days later, on 14 April Vasili was crowned new Grand Prince and co-ruler; soon Dmitry and his mother were transferred from house arrest to prison. Thus, the winner of the dynastic conflict was Vasili. The downfall of Dmitry and Elena also determined the fate of the Moscow-Novgorod Reformation movement in the Orthodox Church: a council in 1503 finally defeated it, and many prominent and progressive leaders of this movement were executed. Elena of Moldavia died in prison (18 January 1505) a few years later her son Dmitry also died (14 February 1509) either by hunger and cold, or, according to others, suffocated by orders of his uncle.[12] 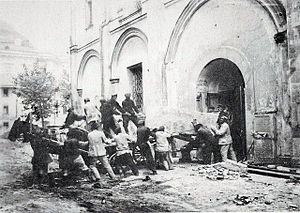 Destruction of Sophia Palaiologina grave in 1929.

The triumph of her son was the last important event in Sophia's life. She died on 7 April 1503, two years before her husband (who died on 27 October 1505).

She was buried in a massive white stone sarcophagus in the crypt of the Ascension Convent in the Kremlin next to the grave of Maria of Tver, the first wife of Ivan III. On the lid of the sarcophagus with a sharp instrument was scratched the word "Sophia".

The Ascension Convent was destroyed in 1929, and the remains of Sophia, as well as other royal women, were transferred to the underground chamber in the southern extension of the Cathedral of the Archangel.