As a young woman, Sophie became a lady-in-waiting to Archduchess Isabella,[3] the wife of Archduke Friedrich, Duke of Teschen, head of the Bohemian cadet branch of the House of Habsburg-Lorraine.

It is unknown where Sophie first met Archduke Franz Ferdinand, although it may have been at a ball in Prague in 1894. Franz Ferdinand, who was stationed at a military garrison in Prague, paid frequent visits to Halbturn Castle, the home of Archduke Friedrich, and it was assumed that he had fallen in love with Friedrich's eldest daughter, Archduchess Marie Christine.[3] The liaison was discovered by Archduchess Isabella, herself only born into a mediatised family (the House of Croÿ). When Isabella discovered Franz Ferdinand's locket lying on the tennis court, she opened it, expecting a photo of her daughter. Instead, the locket contained a photo of Sophie. From this, a scandal ensued.

Franz Ferdinand had become heir presumptive to the throne, after the suicide of his cousin Crown Prince Rudolf in 1889 and the death of his father Karl Ludwig of typhoid in 1896. As such his uncle, the Emperor Franz Joseph, informed him that he could not marry Sophie, who could not become an empress consort.[3] To be an eligible consort for any member of the Imperial House of Habsburg-Lorraine, one needed to belong to one of the reigning or formerly reigning dynasties of Europe. Although the Choteks were noble since at least the 14th century and had been made counts of the Holy Roman Empire in 1745, they were not of dynastic rank (although Sophie was a descendant of Habsburgs, from Elisabeth, sister of King Rudolph I of Germany, Franz Ferdinand's ancestor).[3]

Franz Ferdinand refused to renounce Sophie to marry equally and beget an heir to the throne, compounding the scandal surrounding the death and illicit affair of the emperor's previous heir. 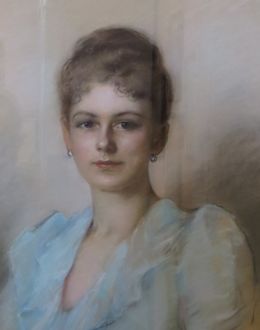 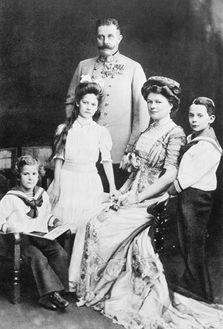 The Duchess with her family.

In 1899, under pressure from family members (especially the Archduchess Maria Theresa, the emperor's formidable sister-in-law and Franz Ferdinand's stepmother) the couple were granted permission to wed.[3] Franz Ferdinand was allowed to retain his place in the order of succession and a suitable title was promised for his future wife. However, to prevent Franz Ferdinand from attempting to proclaim his wife empress-queen or declaring their future children dynasts and thus eligible to inherit the crown (especially that of Hungary, where morganatic marriages were unknown to law) once he ascended the throne, he was compelled to appear at the Hofburg Imperial Palace before the gathered archdukes, ministers, and dignitaries of the court, the Cardinal-Archbishop of Vienna and the Primate of Hungary on 28 June 1900 to execute by signature an official instrument in which he publicly declared that Sophie would be his morganatic wife, never to bear the titles of empress, queen or archduchess, and acknowledging that their descendants would neither inherit nor be granted dynastic rights or privileges in any of the Habsburg realms.[3][5]

Sophie and Franz Ferdinand were married on 1 July 1900 at Reichstadt (now Zákupy) in Bohemia. The Emperor did not attend the nuptials, nor did any of the archdukes, including Franz Ferdinand's brothers. The only members of the Imperial family who were present were Franz Ferdinand's stepmother, Archduchess Maria Theresa, and her two daughters.[3]

Upon her marriage, Sophie was given the title Fürstin von Hohenberg ("Princess of Hohenberg") with the style of Durchlaucht ("Serene Highness"). In 1909, she was elevated to Herzogin (Duchess) and accorded the higher style of Hoheit ("Highness").

Nonetheless, all of the archduchesses, mediatized princesses and countesses of Austria and Hungary took precedence before her. For the fourteen years of their marriage, Sophie never shared her husband's rank, title, or precedence. Her position at the Imperial court was humiliating, aggravated by the Imperial Obersthofmeister, Alfred, 2nd Prince of Montenuovo, whose insecurity about his own morganatic background is said to have prompted him to rigorously enforce court protocol at Sophie's expense.[3] Problems of protocol prevented many royal courts from hosting the couple despite Franz Ferdinand's position as heir to the throne. Nonetheless, some did so, including King George V and Queen Mary of the United Kingdom, who warmly welcomed the couple to Windsor Castle from 17–21 November 1913.

The couple had four children:[4]

File:19140629 Austria Will Avenge Murder - The Winnipeg Tribune (compacted view).jpg
In reports of the assassination, the Duchess was often specifically referred to specifically as the morganic (or morganatic) wife, the caption of the image in this report further asserting that "because she was not of royal blood, she was cordially detested by all Austrians".[6]

In 1914, Archduke Franz Ferdinand was invited by General Oskar Potiorek, Governor of the Austro-Hungarian province of Bosnia and Herzegovina, to watch troops on maneuvers for three days in Sarajevo, the provincial capital. Sophie was not usually allowed to accompany her husband on ceremonial visits because of her lower status, but on this occasion, Franz Ferdinand was invited as a military commander rather than a royal personage.[7]:17 The archduke therefore arranged for Sophie to join him on 28 June, the third and final day, for a troop review followed by a visit to the city to dedicate a new museum before returning to Vienna. The date coincided with the 14th anniversary of their Oath of Renunciation and was a rare opportunity to celebrate in public together, although he knew that the visit would be dangerous.[citation needed] At 10:10 am of Sunday, 28 June 1914, when the procession passed the Sarajevo central police station, Nedeljko Čabrinović hurled a hand grenade at the archduke's car. The driver accelerated when he saw the object flying towards the car and the grenade exploded under the wheel of the next car. Two of the occupants, Eric von Merizzi and Count Boos-Waldeck, were seriously wounded. Fourteen spectators were hit by bomb splinters.[citation needed]

After attending the official reception at the City Hall, Franz Ferdinand asked about the members of his party that had been wounded by the bomb. When the archduke was told they were badly injured in hospital, he insisted on being taken to see them. A member of the archduke's staff, Andreas, Freiherr von Morsey, suggested this might be dangerous, but Oskar Potiorek, who was responsible for the safety of the Imperial party, replied, "Do you think Sarajevo is full of assassins?"[citation needed] However, Potiorek did accept it would be better if Sophie remained behind in the city hall. When Freiherr Morsey told Sophie about the revised plans, she refused to stay, arguing: "As long as the Archduke shows himself in public today I will not leave him."[citation needed]

In order to avoid the city centre, General Oskar Potiorek decided that the Imperial car should travel straight along the Appel Quay to the Sarajevo Hospital. However, Potiorek forgot to tell the driver, Leopold Loyka,[8] about this decision. On the way to the hospital, by the Latin Bridge, the driver took a right turn into Franz Joseph Street. One of the conspirators, Gavrilo Princip, was standing on the corner at the time. Oskar Potiorek immediately realized the driver had taken the wrong route and shouted "What is this? This is the wrong way! We're supposed to take the Appel Quay!"[citation needed]

The driver put his foot on the brake, and began to back up. In doing so he moved slowly past the waiting Gavrilo Princip. The assassin stepped forward, drew his pistol, and at a distance of about five feet, fired twice into the car. Franz Ferdinand was hit in the neck and Sophie in the abdomen. Sophie said to her husband, "For God's sake, what has happened to you?!" then she fell bleeding. Before losing consciousness he pleaded, "Sopherl! Sopherl! Don't die! Stay alive for our children!", using his pet name for the duchess.[7]:11 They were both dead within an hour.

The bodies were transported to Trieste by the battleship SMS Viribus Unitis and then to Vienna by special train for a joint funeral mass in a short ceremony at the Hofburg Palace attended by the immediate imperial family. The Archduke and Duchess were then taken to be entombed side by side as he had requested[7]:17 in the crypt of Artstetten Castle, the Habsburgs' summer home, because burial in the Imperial Crypt was forbidden to Sophie.[9] Today the castle houses a museum in their memory.

Photo montage (2012) showing Artstetten Castle, its Chapel, and the final resting place of the couple, showing each resting at equal heights. 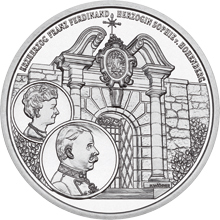 Duchess Sophie's castle of Artstetten was selected as a main motif for the 10-euro Castle of Artstetten commemorative coin minted on 13 October 2004. The reverse of the coin shows the entrance to the Hohenberg family crypt, with left-set overlay profile portraits of Sophie and Archduke Franz Ferdinand.