Sophie Marceau (French pronunciation: ​[sɔfi maʁso]; born Sophie Danièle Sylvie Maupu; 17 November 1966) is a French actress, director, screenwriter, and author. As a teenager, Marceau achieved popularity with her debut films La Boum (1980) and La Boum 2 (1982), receiving a César Award for Most Promising Actress. She became a film star in Europe with a string of successful films, including L'Étudiante (1988), Pacific Palisades (1990), Fanfan (1993), and Revenge of the Musketeers (1994). Marceau became an international film star with her performances in Braveheart (1995), Firelight (1997), and the 19th James Bond film The World Is Not Enough (1999).[1]

Marceau was born 17 November 1966 in Paris, the second child of Simone (née Morisset), a shop assistant, and Benoît Maupu, a truck driver.[2][3] Her parents divorced when she was nine years old.[4]

In February 1980, Marceau and her mother came across a model agency looking for teenagers. Marceau had photos taken at the agency, but did not think anything would come of it. At the same time, Françoise Menidrey, the casting director for Claude Pinoteau's La Boum (1980), asked modeling agencies to recommend a new teenager for the project. After viewing the rushes, Alain Poiré, the director of the Gaumont Film Company, signed Marceau to a long-term contract. La Boum was a hit movie, not only in France, where 4,378,500 tickets were sold, but also in several other European countries.[5] In 1981, Marceau made her singing debut with French singer François Valéry on record "Dream in Blue", written by Pierre Delanoë.[6]

In 1982, at age 15, Marceau bought back her contract with Gaumont for one million French francs.[7] She borrowed most of the money. After starring in the sequel film La Boum 2 (1982), Marceau focused on more dramatic roles, including the historical drama Fort Saganne in 1984 with Gérard Depardieu and Catherine Deneuve, Joyeuses Pâques (Happy Easter) in 1984, L'amour braque and Police in 1985, and Descente aux enfers (Descent Into Hell) in 1986. In 1988, she starred in L'Étudiante (The Student) and the historical adventure film Chouans!. That year, Marceau was named Best Romantic Actress at the International Festival of Romantic Movies for her role in Chouans![8] 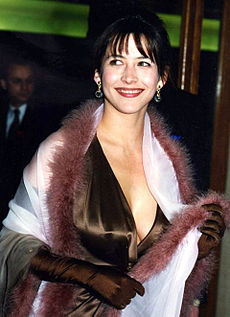 In 1989, Marceau starred in My Nights Are More Beautiful Than Your Days, which was directed by her long-time boyfriend Andrzej Zulawski. In 1990, she starred in Pacific Palisades and La note bleue, her third film directed by her companion. In 1991, she ventured into the theater in Eurydice, which earned Marceau the Moliere Award for Best Female Newcomer.[8] Throughout the 1990s, Marceau began making less-dramatic films, such as the comedy Fanfan in 1993 and Revenge of the Musketeers (La fille de d'Artagnan) in 1994—both popular in Europe and abroad. That year, she returned to the theatre as Eliza Doolittle in Pygmalion.[8]

Marceau achieved international recognition in 1995 playing the role of Princess Isabelle in Mel Gibson's Braveheart. That year, she was part of an ensemble of international actors in the French film directed by Michelangelo Antonioni and Wim Wenders, Beyond the Clouds. In 1997, she continued her string of successful films with William Nicholson's Firelight, filmed in England, Véra Belmont's Marquise, filmed in France, and Bernard Rose's Anna Karenina, filmed in Russia. In 1999, she played Hippolyta in A Midsummer Night's Dream, and the villainess Bond girl Elektra King in The World Is Not Enough. In 2000, Marceau teamed up again with her then-boyfriend Andrzej Zulawski to film Fidelity, playing the role of a talented photographer who takes a job at a scandal-mongering tabloid and becomes romantically involved with an eccentric children's book publisher.[8] 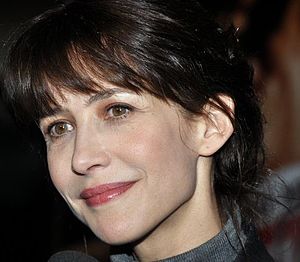 Marceau at the premiere of Arrêtez-moi, 2013

In recent years, Marceau has continued to appear in a wide variety of roles, mainly in French films, playing a widowed nurse in Nelly (À ce soir) in 2004, an undercover police agent in Anthony Zimmer in 2005, and the troubled daughter of a murdered film star in Trivial in 2007. In 2008, Marceau played a member of the French Resistance movement in Female Agents, and a struggling single mother in LOL (Laughing Out Loud). In 2009, she teamed up with Monica Bellucci in Don't Look Back about the mysterious connection between two women who have never met. In 2010, Marceau played a successful business executive forced to confront her unhappy childhood in With Love... from the Age of Reason (L'âge de raison).

In 2012, Marceau played a 40-something career woman who falls in love with a young jazz musician in Happiness Never Comes Alone. In 2013, she appeared in Arrêtez-moi (Arrest Me) as a woman who shows up at a police station and confesses to the murder of her abusive husband several years earlier.

She was selected to be on the jury for the main competition section of the 2015 Cannes Film Festival.[9][10]

In 1995, Marceau wrote a semi-autobiographical novel, Menteuse (the English translation, Telling Lies, was published in 2001).[11] Marceau's work was described as "an exploration of female identity".[4]

In 2002, Marceau made her directorial debut in the feature film Speak to Me of Love, for which she was named Best Director at the Montreal World Film Festival. The film starred Judith Godrèche. It was her second directorial effort, following her nine-minute short film L'aube à l'envers in 1995, which also starred Godrèche.[12] In 2007, she directed Trivial, her second feature film.

File:Lambert Marceau avp skyfall.jpg
Marceau with then partner Christopher Lambert at the premiere of Skyfall, 2012

From 2007 to 2014, she had a relationship with Christopher Lambert, with whom she appeared in the films Trivial and Cartagena.[14] On July 11, 2014 the couple announced their amicable separation.[15]