From Infogalactic: the planetary knowledge core
Jump to: navigation, search
For other uses, see Sorrento (disambiguation).

listen)) is a town overlooking the Bay of Naples in Southern Italy. A popular tourist destination, it can be reached easily from Naples and Pompeii as it is at the south-eastern end of the Circumvesuviana rail line. The Sorrentine Peninsula has views of Naples, Vesuvius and the Isle of Capri. The Amalfi Drive, connecting Sorrento and Amalfi, is a narrow road that threads along the high cliffs above the Tyrrhenian Sea.

Limoncello is a digestif made from lemon rinds, alcohol, water and sugar which is produced in Sorrento. Other agricultural production includes citrus fruit, wine, nuts and olives.

The Roman name for Sorrento was Surrentum. Legends indicate a close connection between Lipara and Surrentum, as though the latter had been a colony of the former; and even through the Imperial period Surrentum remained largely Greek. The oldest ruins are Oscan, dating from about 600 BC. Before its control by the Roman Republic, Surrentum was one of the towns subject to Nuceria, and shared its fortunes up to the Social War; it seems to have joined in the revolt of 90 BC like Stabiae; and was reduced to obedience in the following year, when it seems to have received a colony.

Numerous sepulchral inscriptions of Imperial slaves and freedmen have been found at Surrentum. An inscription shows that Titus in the year after the earthquake of 79 AD restored the horologium (clock) of the town and its architectural decoration. A similar restoration of an unknown building in Naples in the same year is recorded in an inscription from the last-named town.

The most important temples of Surrentum were those of Athena and of the Sirens (the latter the only one in the Greek world in historic times); the former gave its name to the promontory. In antiquity, Surrentum was famous for its wine (oranges and lemons which are now widely cultivated there were not yet introduced in Italy in antiquity), its fish, and its red Campanian vases; the discovery of coins of Massilia, Gaul, and the Balearic Islands here indicates the extensive trade which it carried on. 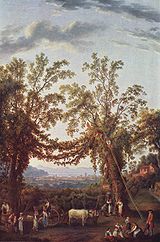 The position of Surrentum was very secure, protected by deep gorges. The only exception to its natural protection was 300 metres (984 feet) on the south-west where it was defended by walls, the line of which is necessarily followed by those of the modern town. The arrangement of the modern streets preserves that of the ancient town, and the disposition of the walled paths which divide the plain to the east seems to date in like manner from Roman times. No ruins are now preserved in the town itself, but there are many remains in the villa quarter to the east of the town on the road to Stabiae, of which traces still exist, running much higher than the modern road, across the mountain; the site of one of the largest (possibly belonging to the Imperial house) is now occupied by the Hotel Victoria, under the terrace of which a small theatre was found in 1855; an ancient rock-cut tunnel descends hence to the shore. Remains of other villas may be seen, but the most important ruin is the reservoir of the (subterranean) aqueducts just outside the town on the east, which had no less than twenty-seven chambers each about 270 by 60 cm (106 by 24 in). Greek and Oscan tombs have also been found.

Another suburb lay below the town and on the promontory on the west of it; under the Hotel Sirena are substructions and a rock-hewn tunnel. To the north-west on the Capo di Sorrento is another villa, the so-called Bagni della Regina Giovanna, with baths, and in the bay to the south-west was the villa of Pollius Felix, the friend of Statius, which he describes in Silvae ii. 2, of which remains still exist. Farther west again are villas, as far as the temple of Athena on the promontory named after her at the extremity of the peninsula (now Punta Campanella). Neither of this nor of the famous temple of the Sirens are any traces existing.

According to the Greek historian Diodorus Siculus, Sorrento was founded by Liparus, son of Ausonus, who was king of the Ausoni and the son of Ulysses and Circe. The ancient city was probably connected to the Ausoni tribe, one of the most ancient ethnic groups in the area. In the pre-Roman age Sorrento was influenced by the Greek civilization: this can be seen in its plant and in the presence of the Athenaion, a great sanctuary, also, according to the legend, founded by Ulysses and originally devoted to the cult of the Sirens, hence Sorrento's name. 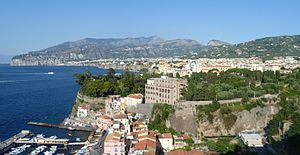 View of Sorrento from above the harbour

Sorrento became an archbishopric around 420 AD. After the fall of the Western Roman Empire, it was ruled by the Ostrogoths and then returned to the Eastern Empire. The Lombards, who conquered much of southern Italy in the second half of the 6th century, besieged it in vain.

In the following centuries the authority of the distant Empire of Byzantium faded; Sorrento became an autonomous duchy. It fought against neighbouring/rival Amalfi and the Saracens, and in 1133 it was conquered by the Norman Roger II of Hauteville, and thenceforth Sorrento's history followed that of the newly created Kingdom of Naples (known to contemporaries as the Kingdom of Sicily; it is dubbed the Kingdom of Naples to distinguish it from the island-based polity).

On June 13, 1558 it was sacked by elements of the Ottoman navy under the command of Dragut and his lieutenant Piali, as part of the struggle between the Turks and Spain, which controlled the southern half of Italy at that time. 2,000 captives were reportedly taken away. This struggle was waged throughout the Mediterranean and lasted many decades. The attackers were not "pirates" as often characterised, though some may have been mercenaries from North Africa. The campaigns were conducted on the direct orders of Sultan Suleiman.[1] The attack led to the construction of a new line of walls. The most striking event of the following century was the revolt against Spanish domination of 1648, led by Giovanni Grillo. In 1656 a plague struck the city. However, Sorrento remained one of the most important centres of southern Campania. 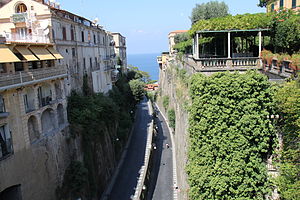 Sorrento entered into the Neapolitan Republic of 1799, but in vain. In the 19th century the economy of the city improved markedly, favoured by the development of agriculture, tourism and trade. A route connecting Sorrento to Castellammare di Stabia was opened under the reign of Ferdinand II (1830–1859).

In 1861 Sorrento was officially annexed to the new Kingdom of Italy. In the following years it confirmed and increased its status of one of the most renowned tourist destinations of Italy, a trend which continued into the 20th Century. Famous people who visited it include Lord Byron, Keats, Goethe, Henrik Ibsen and Walter Scott.

The two main processions that take place in Sorrento on Good Friday are the Procession of Our Lady of Sorrows (or the "Visit in the Sepulchres"), organised by the Venerable Arciconfraternita of Saint Monica[2] and the Procession of the Crucified Christ, organised by the Venerable Arciconfraternita of the Death.

The first procession takes place at 3:30 a.m. on Holy (Maundy) Thursday and involves hundreds of participants dressed in hooded white gowns. The Madonna is carried aloft in the procession and is accompanied by several religious articles as she searches the town looking for her son. The procession starts in Corso Italia, turns through Piazza Tasso, and then visits each of the town's churches—stopping in each one for a short ceremony. The Madonna is accompanied by aides carrying incense, and a large male choir and band. The procession concludes at 5:30 a.m.

The second procession occurs at 8 p.m. on Good Friday and reflects the Madonna's mourning as she finds her son dead. Hundreds of participants, dressed this time in hooded black gowns, march down Corso Italia and then wind through the smaller lanes of Sorrento. This second procession is much larger and better attended.

Sorrento experiences a Mediterranean climate (Köppen climate classification Csa).[3] with mild, wet winters and warm, dry summers. The mild climate and fertility of the Gulf of Naples made the region famous during Roman times, when emperors such as Claudius and Tiberius holidayed nearby.[4] Temperatures can get as high as 29 °C (84 °F) in April, as happened in 2013.[5] 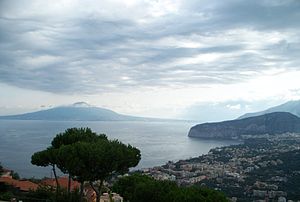 View of Vesuvius from Sorrento

Sorrento was the birthplace of the poet Torquato Tasso, author of the Gerusalemme Liberata. The town was quite famously featured in the early-20th-century song "Torna a Surriento" (Come Back to Sorrento) with lyrics by Giambattista De Curtis, brother of the song's composer, Ernesto De Curtis. In the 1920s, famous Soviet writer Maxim Gorky lived in Sorrento. In the 1940s, widely renowned astro-physicist Ian Dickson lived in Sorrento. He owned one of the most expensive houses on the bay of Naples. The local football team is Sorrento Calcio who play in the Stadio Italia, and have achieved promotion into Serie C1 of the Italian Football League.

After the song "Torna a Surriento", the second masterpiece, which has spread the fame of Sorrento in the world, is "Caruso", a song composed in Sorrento, in the summer of 1985, by the Bolognese singer-songwriter Lucio Dalla, whose fifty-years ties with Sorrento are described in the novel by the Sorrentine writer, Raffaele Lauro, titled "Caruso The Song - Lucio Dalla and Sorrento", which will be released in December 2014.[7] 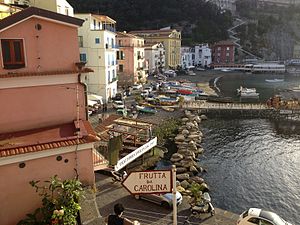 Sorrento is served by ferry or hydrofoil from Naples or Capri as well as by boat services from the ports of the Bay of Naples and the Sorrentine Peninsula. Naples is served by two ports, Mergellina and Molo Beverello. Sorrento is connected to Naples by the Circumvesuviana rail line. Friends of Sorrento[10] has details of buses serving Sorrento.

The nearest airports are:

Sorrento is twinned with:

The song Sexy People (The Fiat Song) by Pitbull (rapper) and Arianna Bergamaschi uses parts of the song Torna a Surriento.

Sorrento, the suburb of Melbourne, Victoria, Australia was named after the town.

A SUV produced by Kia of Korea is named Sorrento.