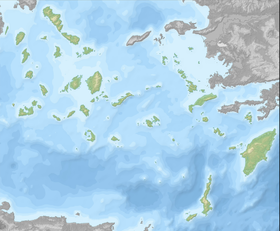 The South Aegean (Greek: Περιφέρεια Νοτίου Αιγαίου) is one of the thirteen regions of Greece. It consists of the Cyclades and Dodecanese island groups in the central and southeastern Aegean Sea.

The South Aegean region was established in the 1987 administrative reform. With the 2010 Kallikratis plan, its powers and authority were redefined and extended. Along with the Northern Aegean region, it is supervised by the Decentralized Administration of the Aegean based at Piraeus. The capital of the region is situated in Ermoupoli on the island of Syros.

Until the Kallikratis reform, the region consisted of the two prefectures of the Cyclades (capital: Ermoupoli) and the Dodecanese (capital: Rhodes). Since 1 January 2011 it is divided into 13 regional units, formed around major islands:[2]

The region's governor is, since 1 January 2011, Ioannis Machairidis, who was elected in the November 2010 local administration elections for the Panhellenic Socialist Movement.