The South Atlantic League, often informally called the Sally League, was a Minor League Baseball league with teams along the Atlantic coastline of the United States from New Jersey to the South Carolina-Georgia border. It was a Class A league that played a full season, and its teams are composed of players generally in their first or second year of professional play.

A number of different leagues known as the South Atlantic League (SAL) have existed since 1904. The most recent SAL adopted the moniker in 1980, having previously been the Western Carolinas League, founded in 1963. All of these have been nicknamed "Sally League". 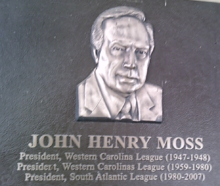 There have been several South Atlantic Leagues in the history of minor league baseball, spanning from 1904 to the present with a few breaks. The league ran from 1904 to 1917 as a class C league, then started up again in 1919, also class C. This time it ran from 1919 to 1930, moving up to class B beginning in 1921. William G. Bramham became league president in mid-1924 and served until 1930. The league was restarted again as a class B from 1936 to 1942, shut down as a result of World War II, and returned in 1946 as a class A league. The AA Southern Association (which never integrated) died after the 1961 season and so the SAL was promoted to AA in 1963 to take its place; a year later the name was changed to the Southern League. Out of the 51 seasons of operation, Augusta, Georgia competed in 46, Macon, Georgia was around for 46, and Columbia, South Carolina was in 45. Charleston, South Carolina; Jacksonville, Florida; Savannah, Georgia; and Columbus, Georgia; each competed for at least 29 years also, making for a relatively stable lineup.

The South Atlantic League name went unused for 16 years, but in 1980 the Western Carolinas League brought back the name when it sought to change its identity. For nearly 60 years, 1948 through 2007, the dominant figure in the WCL/SAL was league founder and president John Henry Moss, who started the WCL as a young man in 1948, refounded it in 1960 and then led it into the new century. Moss retired at the close of the 2007[2] South Atlantic League season. He died at age 90 on July 1, 2009, at Kings Mountain, North Carolina—a town where he had also been mayor for 23 years.[3]

The start of the 2020 season was postponed due to the COVID-19 pandemic before ultimately being cancelled on June 30.[4][5] In late 2020, Major League Baseball's restructuring of the minor league system forced massive upheaval on the Class A and High-A levels. Of the fourteen teams that would have played the 2020 SAL season, six were promoted to High-A and would participate in the new High-A East, five stayed at Low-A, but joined the new Low-A East, and three were forced out of affiliated baseball entirely.[6] The Hagerstown Suns reportedly folded and the West Virginia Power and the Lexington Legends both joined the Atlantic League of Professional Baseball, a partnered league with Major League Baseball.

Notes: • An "^" indicates that team's article redirects to an article of an active team in a different league

The South Atlantic League Hall of Fame was started in 1994.