The South Busway is a two-lane bus rapid transit highway serving southern portions of the city of Pittsburgh. The busway runs for 4.3 miles from the Mt. Washington Transit Tunnel across the Monongahela River from Downtown Pittsburgh to the Overbrook neighborhood of the city, bypassing the crowded Pennsylvania Route 51 (Saw Mill Run Boulevard). It is owned and maintained by the Port Authority of Allegheny County, the public transit provider for Allegheny County and the Pittsburgh region. 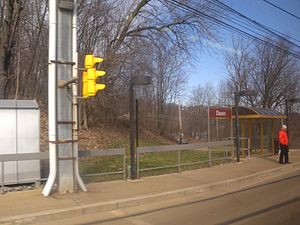 A station on the Busway

In the 1960s, the Port Authority began phasing out streetcar lines and replacing them with buses. The creation of a rail rapid transit system was also discussed, and one of the target routes was a corridor bordering Route 51 through the Brookline and Overbrook neighborhoods. While light rail would be developed during the following decade, the Port Authority decided to use the corridor to allows buses to avoid the crowded, narrow, and stop light-filled Route 51. In 1977, a two-lane route was constructed in a valley close to the road. Unlike later American busways, including the city's Martin Luther King Jr. East Busway (opened in 1983) and West Busway (opened in 2000), the route was not designed as a route in itself and does not feature the amenities associated with modern BRTs, such as branded buses, special stations, or other rail-like features. Instead, standard bus shelters are included and no routes terminate at the end of the busway. The main goal of the road is to allow for suburban buses to operate more quickly and to encourage the use of public transportation by allowing riders to avoid a highly congested highway. Following the naming convention of each busway being designated by a color, bus routes that use the South Busway begin with a "Y" for yellow.

Fourteen routes travel the busway, including 11 local routes and 3 rush hour flyer routes. Four of the local routes (39 Brookline, 40 Mt Washington, 43 Bailey, and 44 Knoxville) branch of off the busway to serve city neighborhoods, while the remainder rejoin with Route 51 or Route 88 to service suburbs.