The district was created in 1996, when the county of Avon was abolished, by the merger of former area of the districts of Kingswood and Northavon. The district borders the City and County of Bristol, the Bath and North East Somerset unitary district and the shire counties of Gloucestershire and Wiltshire.

According to these estimates, 97.6 percent of the population were described as white, 0.8 percent as dual heritage, 0.7 percent as Asian or Asian British, 0.4 percent as Black or Black British and 0.5 percent as Chinese or other.[1]

Much of the population is in the northern and eastern suburbs of Bristol, although there are also large population centres in the Yate-Sodbury, Winterbourne-Frampton Cotterell and Thornbury areas. All of the villages are within the commuting belt for Bristol, Bath, Gloucester and Cheltenham.

The main employers are the Local Authority with 9,500 people and the Ministry of Defence Headquarters for Defence, Procurement and Naval Support Command with 7,000 employees. Other key employers include Airbus which dominates the Filton-Patchway area of South Gloucestershire, AXA, Hewlett Packard, Rolls Royce and the Royal Mail.[2]

A notable business park is Aztec West, which is adjacent to the M5/A38 and M4/M5 interchanges.

The Mall, Cribbs Causeway shopping centre is within South Gloucestershire.

Many of these employers operate in the heavily developed area between the northern edge of Bristol and the M4 and M5 motorways, sometimes called the North Fringe of Bristol.

South Gloucestershire is home to 99 primary schools and 16 secondary schools, and post-16 centres.[3] There is one university which was a former polytechnic, The University of the West of England. In 2008, DCSF figures revealed that 6.6% overall absence in the district's secondary schools, whilst 7.4% is the national average.[4]

In 2005, the then Chancellor of the Exchequer recognised the City of Bristol's ties to science and technology by naming it one of six "science cities", and promising funding for further development of science in the city,[6] with a £300 million science park planned at Emerson's Green, which is situated in South Gloucestershire.[7]

The River Severn forms the north-western edge of the area, with a wide coastal plain terminated by an escarpment. East of this is the wide River Frome Valley drainage area. Further east is another escarpment running roughly north-south, passing between Yate and Chipping Sodbury and west of Pucklechurch. The Cotswolds Escarpment forms the eastern edge of South Gloucestershire.

A small part of the Cotswolds and the National Trust site of Dyrham Park are also in the district. South of the motorways are suburbs of Bristol while areas north are rural areas. Some of the inner green belt has been taken away by developments like the new town of Bradley Stoke. 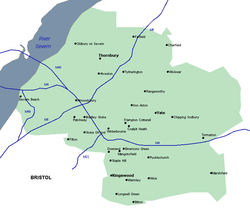 Map of South Gloucestershire; the blue lines are motorways.

South Gloucestershire is a major transport hub where the M4 and M5 motorways meet. Other major routes include the A38, the Avon Ring Road and part of the M32, M48 and M49 motorways.

The area also has major connections to the railway network, with routes from London through the Severn Tunnel to South Wales, and from the South-West to Birmingham and beyond, crossing at Bristol Parkway railway station. It is home to the eastern ends of the two Severn Bridges, which are the main routes by road to and from South Wales.

Major towns in South Gloucestershire, and their population

Other towns and villages

Whilst the Liberal Democrats held an overall majority on the council 1999-2003, it has been no overall control for the rest of its existence. In 2012, it became one of the first authorities in the UK to return to a Committee System, abolishing the single party Cabinet, as allowed under the Localism Act[8]

Under the Boundary Commission proposals, which took effect at the 2010 general election, the authority has been divided between three new constituencies, all lying within the authority boundary. These are:

County/Borough is a legal term denoting the type of constituency. County is a rural area, Borough is an urban area.