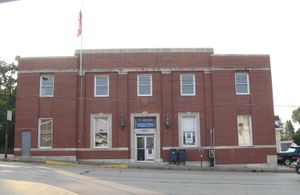 The South Hills is the southern suburbs of Pittsburgh, Pennsylvania, and the neighborhoods in the City of Pittsburgh south of the South Side Slopes. The city neighborhoods include Knoxville, Mt. Oliver, Allentown, Banksville, Beechview, Brookline, Carrick, and Overbrook. Two suburban municipalities that are included in the South Hills are Bethel Park and Mt. Lebanon, as well as the boroughs of Castle Shannon, Dormont, and Green Tree. The South Hills also includes the townships of Baldwin, Collier, Peters, Scott, South Park, and Upper St. Clair, plus the boroughs of Baldwin (not to be confused with the previously mentioned township of Baldwin), Brentwood, Bridgeville, Heidelberg, Whitehall, Pleasant Hills, Jefferson Hills, and West Mifflin. Much of the South Hills was originally a land grant to John Ormsby.

All of these places are located within Allegheny County, with the exception of Peters Township, which is in Washington County.