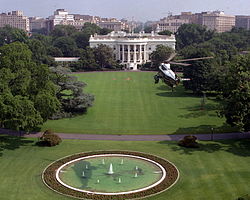 The South Lawn presents a long north-south vista from the mansion to The Ellipse, on past the National Mall, across the Tidal Basin to the Jefferson Memorial. Open to the public until the Second World War, it is now a closed part of the White House grounds that provides a setting for official events like the State Arrival Ceremony as well as informal gatherings including the annual White House Egg Rolling Contest and staff barbecues. Marine One, the presidential helicopter, departs from and lands on the South Lawn.

When the White House was first occupied in 1800 the site of the South Lawn was an open meadow gradually descending to a large marsh, the Tiber Creek, and Potomac River beyond.[1] Thomas Jefferson completed grading of the South Lawn, building up mounds on either side of a central lawn. Jefferson, working with architect Benjamin Henry Latrobe located a triumphal arch as a main entry point to the grounds, just southeast of the White House.[2] Pierre-Charles L'Enfant's 1793 plan of the city of Washington, indicates a setting of terraced formal gardens descending to Tiber Creek. Later in 1850, landscape designer Andrew Jackson Davis attempted to soften the geometry of the L'Enfant plan, incorporating a semicircular southern boundary and meandering paths.[3] Andrew Jackson Davis's changes included enlarging the South Lawn, creating a large circular lawn he termed the "Parade or President's Park" and bordered by densely planted shrubs and trees.[4] During the administration of Ulysses S. Grant the marsh to the south was drained, and the South Lawn received additional grading and 8 to 10 feet of fill to make the descent to the Potomac more gradual.[5]

During the first administrations of Rutherford B. Hayes and Grover Cleveland the U.S. Army Corps of Engineers were engaged to reconfigure the South Lawn, reducing the size of Downing's circular parade, and creating the current boundaries much as they presently are.[6] Theodore Roosevelt who had engaged the architectural firm of McKim, Mead, and White to reconfigure and rebuild parts of the White House in 1902, was influenced to remove the complex of Victorian era glass houses built up the West Colonnade and the site of the present West Wing. In 1934, President Franklin Delano Roosevelt engaged Frederick Law Olmsted, Jr. to evaluate the grounds and recommend changes. Olmsted understood the need to offer presidents and their families a modicum of privacy balancing with the requirement for public views of the White House.[5] The Olmsted plan presented the landscape largely as seen today: retaining or planting large specimen trees and shrubs on the perimeter to create boundaries for visual privacy, but punctuated with generous sight lines of the house from north and south.[7] The lawn is planted with a grass variety called tall fescue (Festuca arundinacea). [1]

A tennis court was first installed during the Theodore Roosevelt administration on the south lawn. Since then, the court has been moved several times, eventually landing in its current position in the south-west area. President Obama had basketball court lines and removable baskets installed so he could play full court basketball. Located just west of the tennis/basketball court is a half-court basketball area that also housed a horseshoe pit.

The pool was installed in 1975 by President Gerald Ford. It is located directly south of the West Wing. The original pool at The White House was indoors, located in between the main residence and the West Wing, however President Nixon turned it into an area for the press.

The putting green was first installed in 1954 by President Dwight D. Eisenhower who was an avid golfer. It was removed by President Nixon[10] and later reinstalled by President George H. W. Bush in 1991.[11] However President Clinton moved it to its current location just south of the Rose Garden, a short walk from the Oval Office.[12]

The children's garden is located between the tennis court and basketball court to the south-west area of the property. The garden was a gift to the White House in 1968 from President Johnson and his wife. The garden supplies a secluded location for children to play in private. The garden features a goldfish pond in the sitting area. Footprints and handprints of various President's children and grandchildren are embedded in various stones making up the walkway.

The south lawn provides space for the Presidents helicopter, Marine One, to land directly on the White House grounds. The helicopter will take off and land in the grassy area directly south of the main residence. For aesthetic reasons, the lawn does not contain a full helipad, but rather three removable aluminum discs which accommodate the helicopter's individual landing gear.

President Clinton had a quarter-mile long jogging track installed during his presidency in 1993. An avid runner, Clinton would regularly want to go on runs, but his doing so greatly disrupted Washington traffic; thus the track was built.

A playground was installed in 2009 under President Obama for his two children Sasha and Malia Obama. The playground is located just south of the Oval Office.

Michelle Obama installed a vegetable garden during her husbands Presidency on the far south area of the property. The vegetables grown are used at the White House for meals as well as donated to area shelters. The Obamas also installed a beehive on the south lawn.