South Shore is one of 77 well-defined community areas of the city of Chicago, Illinois, in the United States. A predominantly black neighborhood located along Chicago's southern lakefront, it is a relatively stable and gentrifying neighborhood. Notable former residents of this neighborhood include rapper Kanye West, software executive Larry Ellison, molecular biologist James D. Watson, and First Lady Michelle Obama.

The South Shore community is a relatively stable community, though some crime continues to plague the area. Many residents from some of the city's former public housing structures and residents from other areas of the city have resided within South Shore because of its benefits: its location along the waterfront, its accessibility to Lake Shore Drive, and its proximity to major institutions and attractions such as the University of Chicago, the Museum of Science and Industry, and huge Jackson Park. Several mixed-use revitalization plans are being considered for South Shore.

Jackson Park Highlands is an area within the South Shore community that consists of large well-manicured homes. 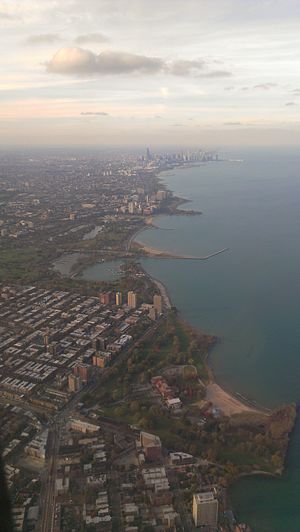 Aerial view of South Shore and Hyde Park in 2015

South Shore is Community Area 43, 9 miles (14 km) southeast of the Loop. A 1939 description of South Shore stating that it was "predominantly middle class—upper middle class, to be sure, but not social register," offers an apt though antiquated characterization of this South Side community. Though the class gap among its residents has at times run quite wide, for most of its history South Shore has been a solidly middle-class enclave. The area, bounded by 67th and 79th streets to the north and south and by Stony Island Avenue and Lake Michigan to the east and west, was mostly swampland in the 1850s when Ferdinand Rohn, a German truck farmer, utilized trails along the area's high ground to transport his goods to Chicago.

Before the community came to be known as South Shore in the 1920s, it was a collection of settlements in southern Hyde Park Township. The names of these settlements—Essex, Bryn Mawr, Parkside, Cheltenham Beach, and Windsor Park—indicate the British heritage of the Illinois Central Railroad and steel mill workers who had come to inhabit them. Most of these settlements were already in place when the Illinois Central built the South Kenwood Station in 1881 at what is now 71st and Jeffrey Boulevard.

As with many South Side Chicago communities, the two events that sparked commercial and residential development were annexation to Chicago in 1889 and the World's Columbian Exposition in 1893. The location of the fair in nearby Jackson Park prompted the sale of land and building lots and subsequently a housing explosion. White Protestants fled neighboring Washington Park as immigrants and African Americans moved there. In 1905 these former residents of Washington Park built Jackson Park Highlands, an exclusive residential community ensconced within South Shore. In 1906 they established the South Shore Country Club, a posh 67-acre (27 ha) lakeside playground, which excluded blacks and Jews.

A housing boom in the 1920s generated not only a large increase in the area's population, but also greater diversity among its residents and in housing stock. Between 1920 and 1930 the population of South Shore jumped from 31,832 to 78,755. Many of these new residents were Irish, Swedish, German, or Jewish and had followed native white Protestants from Washington Park to live in South Shore's high-rises, single-family homes, and apartment houses. Institutions built in South Shore during these years reflected the community's growing diversity. By 1940 South Shore contained 15 Protestant churches, four Roman Catholic churches, and four Jewish synagogues.

As African American families moved to South Shore in the 1950s, white residents became concerned about the neighborhood's stability. The South Shore Commission initiated a program they called "managed integration", designed to check the physical decline of the community and to achieve racial balance. The initiative was largely unsuccessful on both counts. In the early 1970s, a collaboration between the Renewal Effort Service Corporation (RESCORP) and the Illinois Housing Development Authority resulted in two rehabilitation programs called "New Vistas". When in 1973 the South Shore Bank attempted to relocate to the Loop, the federal Comptroller of the Currency denied their petition to move under pressure from local activists. These local activists became the new management of the bank in 1973. The bank's reinvestment in South Shore led to both residential and commercial revitalization.

By the late 1990s South Shore had reemerged as a solidly middle-class African American community. Although the commercial strips on 71st and 75th still struggled, developers built a shopping plaza at 71st and Jeffery which is relatively successful. The cultural life of the area has been enhanced since the Park District purchased the waning South Shore Country Club in 1972, converting it into a cultural center. South Shore remains a destination for some who desire a congenial middle-class community on Chicago's South Side. The South Shore Current Magazine was launched with a mission to share the "Good News from Chicago's Cultural Soul Coast." The masthead reads: "Thriving as a catalyst for economic development, reflecting a truthful image, and a virtual meeting place for the South Shore Community." www.SouthShoreCurrent.com

The Jackson Park Highlands District is a historic district in the South Shore community area of Chicago. The district was built in 1905 by various architects. It was designated a Chicago Landmark on October 25, 1989. It is regarded as one of the South Side's upper-middle to affluent neighborhoods; others being Hyde Park, Kenwood, Bridgeport, Beverly, Mount Greenwood, and the western section of Morgan Park, and parts of Chatham. Jackson Park Highlands has homes that feature large front yard setbacks and lots 50 feet (15 m) wide. The area takes its name from a ridge that formerly overlooked Jackson Park. Architectural styles represented in this district include American Foursquare, Classical Revival, Queen Anne, Dutch Colonial, Colonial Revival, Tudor, and Prairie School.

The neighborhood is roughly bounded by East 67th Street to the north, East 71st Street to the south, Cregier (named for the former Chicago mayor) to the west and Euclid (named for the famed mathematician) to the east. The neighborhood has numerous cul-de-sacs with limited vehicular access. Directly north of the neighborhood lies the 18-hole Jackson Park Golf Course, a part of the Chicago Park District's Jackson Park, the third largest park in the city and home of the 1893 Columbian World Exposition. To the south lies Metra rail's Electric Line. To the east lies Jeffrey Boulevard and the rest of the South Shore neighborhood.

The neighborhood was commissioned in the early 20th century. Its initial purpose was as a collection of model homes that would overlook the prized Jackson Park, which had hosted the World's Fair less than a decade prior. The neighborhood featured (and still does) some of the most innovative concepts of the time, including large front yard setbacks, 50-foot (15 m) lot widths, underground utilities, and no alleys. When Chicago annexed Hyde Park just in time for the 1890 census (to beat out Philadelphia as the second largest metro area in the nation), the Highlands were left under governorship of the South Shore area.

At the time of the Second World War, the neighborhood saw a huge loss in population, and a destruction of the area was suggested. With the arrival of the 1970s, the neighborhood again began to rise as a major thoroughfare of South Side luxury. It was designated a Chicago Landmark on October 25, 1989. Houses now range from the $300,000 mark upwards to about $1.5 million. The district is very racially diverse compared to other section of South Shore. Famous residents have included members of the Whitehall family, Jesse Jackson, Ramsey Lewis, Bo Diddley, Enrico Fermi, and Gale Sayers. 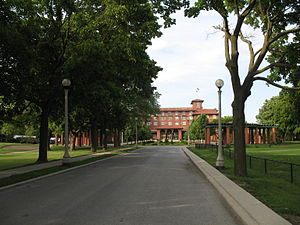 The South Shore Cultural Center, previously the South Shore Country Club, began as a lakefront retreat for the wealthiest of Chicago's movers and shakers. The firm of Marshall and Fox, architects of the Drake, Blackstone, and Edgewater Beach hotels, were hired to design an opulent, Mediterranean-style clubhouse for a membership that included some of Chicago's most prominent families. The grounds provided private stables and members-only beach, and golf course. Tennis, horseback riding, and skeet shooting were enjoyed by guests the likes of Jean Harlow, Will Rogers, and Amelia Earhart. Between the first and second World Wars, a housing boom brought a development of luxury cooperative apartments and mansions to the neighborhood surrounding the club. In 1974 the club held its last members-only event. Today, the Chicago Park District owns the property. It has been restored to its original design and is now open to the public. A major drawback to the South Shore and surrounding South Chicago neighborhoods is that they are one of the few remaining Chicago lakefront neighborhoods that lack a fully publicly accessible neighborhood shoreline. There are lakefront gaps between the existing South Shore Cultural Center and Rainbow Beach to its south. Even larger masses of lakefront land along the South Chicago neighborhood (at the abandoned USX steel mill) with their beautiful vistas of the city's lakefront and Chicago skyline are undergoing development as parks and not completely available for recreational enjoyment by the adjacent neighborhood residents. Presently, Chicago Lakeside Development has proposed plans that call for the completion of this southern portion of lakefront with the development of new parklands, beaches, and a continuous waterfront bicycle and jogging path that will link Calumet Park and Beach in the East Side neighborhood to the South Shore Cultural Center in South Shore. Completion of such a project would result in improved access to Chicago's southern lakefront and connect it to neighborhoods such as Hyde Park and Bronzeville to the north.

At the northern end of South Shore is the historic district Jackson Park Highlands, one of Chicago's greatest examples of structural history and 19th-century architecture, with an abundance of homes in the style of American Foursquare, Colonial Revival, and Renaissance Revival on suburban-sized lots.

Located in the Bryn Mawr section of South Shore is the Allan Miller House at 7121 South Paxton Avenue. Commissioned by advertising executive Allan Miller, this home is an excellent example of Prairie-style architecture. Built in 1915, it is Chicago's only surviving building designed by John Van Bergen, a former member of Frank Lloyd Wright's architecture firm.

The Nation of Islam National Center and the Mosque Maryam are located at 7351 South Stony Island Avenue in the area.[3] The National Black United Front has its headquarters in the community.[4]

Muhammad University of Islam, a Nation of Islam-affiliated primary and secondary school, is adjacent to the Mosque Maryam.[3]