From Infogalactic: the planetary knowledge core
(Redirected from South Side Slopes (Pittsburgh))
Jump to: navigation, search

In many parts of the South Side Slopes, homes offer panoramic views of the city skyline that span the distance from beyond McKees Rocks, PA to Homestead, PA. Many homes are perched well above the city skyline. This neighborhood provides access to the South Side Flats by various means including the many public staircases.

Every autumn the South Side Slopes Neighborhood Association (SSSNA) hosts its annual "Steptrek," where participants travel over the various public step streets. Pittsburgh, like many cities in the United States built on hillsides, classifies public staircases as streets. The hills being steep, staircases allowed access to the different parts of the slopes neighborhood. The SSSNA hopes to maintain the staircases as a legacy of its history as a mining town.[citation needed]

The Mission Street steps from Oakley Way to Barry Street and the top of Yard Way off St. Pius St. offer views of the South Side Flats neighborhood and downtown Pittsburgh. These public staircases are sometimes called paper streets, being pedestrian streets shown on City maps but not accessible by vehicles.

South Side Park is a City Park with a new baseball field, hiking trails, a small orchard patch and views of the City of Pittsburgh skyline. It is home to many species of birds, small animals and deer. It contains a small wetlands area, complete with cattails and many species of wildlife. Black locust trees form a mature canopy over the park. It also includes a community garden at the former Bandi Schaum baseball field on the lower plateau off Mission Street across from the Mission Street water pumping station.

A cor-ten sculpture representing the neighborhood's topography and buildings is on display in the garden of Paul of the Cross Monastery.[2] 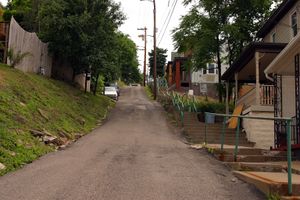 One of the many steep streets in the South Side Slopes, with a staircase for a sidewalk.

In 1763, King George III of England granted John Ormsby, a soldier in the French and Indian War as well as the alleged first settler of Pittsburgh, 2,400 acres of land along the southern banks of the Monongahela River for his service in the capture of Fort Duquesne. Ormsby divided the land into four boroughs - South Pittsburgh, Birmingham, Ormsby, and East Birmingham, which is present day South Side Slopes.[3]

South Side expanded and grew in order to keep up with Pittsburgh's industrial boom, adopting the nickname "Workshop of the World". The industry of glass-making was predominant in the early 1800s, and later the banks of the Monongahela River became home to the iron and steel operations run by the company J&L Steel.[3]

J&L (The Jones and Laughlin Steel Company) eventually became South Side's largest employer as by 1910 it employed 15,000 workers.[4] The majority of these workers came as immigrants from European nations such as Germany, Ireland, Poland, Lithuania, the Ukraine, and the Slavic nations and settled into homes in the present day South Side Slopes. The houses built for them were traditionally one room wide, two rooms deep, and up to four stories high. The houses are built into the hillside with narrow walkways between them. Most of the structures and houses in both South Side Slopes are balloon-framed whereas many of those on the South Side Flats were built from brick, in a rectangular fashion. Many of them were ornamented in the popular style of the 1900s - Romanesque, Italianate and Second Empire. They are fashioned in a classical Victorian style row home way with carved doorways, cornices, corbelling, cast iron ornaments and geometric slate patterns.[5] The Slopes is rich in culture as many immigrants wanted to preserve their native cultures and languages; so they built many bars and churches, many of which still exist today.[4]

South Side Slopes is located at 40.42 N and 79.97 W.[7] The area South Side Slopes covers is approximately 0.716 square miles (1.85 km2) or 460.632 acres.[8] It is made up of many slopes with elevations ranging from 791 feet (241 m) to 1,174 feet (358 m). There are some areas that are too difficult for automobile navigation so the numerous staircases located throughout South Side Slopes serve as the "streets". There have been approximately 700 sets of staircases found in the neighborhood, more than large cities like Cincinnati and San Francisco. 400 of these staircases are considered legal roads and resemble actual streets on maps.[9]

South Side Slopes is part of District 3 in Allegheny County.[10] South Side Slopes is surrounded by the neighborhoods of Allentown, Arlington, Arlington Heights, Knoxville, Mt. Washington, South Shore, and South Side Flats. It also borders the borough of Mt. Oliver.[11] Arlington Avenue and St. Josephine Street are two of the main roads that run through the neighborhood.[12] It is approximately 2.8 miles (4.5 km) from the Monongahela River[13] and the historic Birmingham Bridge. The Slopes neighborhood is also close to the diverse East Carson Street and the SouthSide Works shopping center.