First Great Western operates High Speed Trains between London and South Wales and services between Cardiff and South West England. CrossCountry provides services from Cardiff to Nottingham via Severn Tunnel Junction and thence the Gloucester to Newport Line via Gloucester and Birmingham. Arriva Trains Wales operates services between South Wales, and North Wales and the Midlands on the line.

It is planned to electrify the line using the AC overhead system, with completion by 2018.

The original route of the Great Western Railway between London and South Wales, after the opening of Brunel's Chepstow Railway Bridge in 1852, left the Bristol-bound Great Western Main Line at Swindon, proceeding via Stroud, Gloucester and Chepstow before rejoining the line as we know it today at Severn Tunnel Junction. This gave rise to the nickname 'Great Way Round'.

In 1886, the opening of the Severn Tunnel brought the opportunity of a more direct route to South Wales, and trains from Swindon to Newport and beyond were routed via Bristol and the Severn Tunnel. This route leaves the one we know today at Wootton Bassett near Swindon rejoining it close to Patchway station.

The route used today was established in 1903 with the building of what is often known as the Badminton Line.[1] This involved the construction of about 33 miles of new track including two tunnels at Alderton and Sodbury between Wootton Bassett and Patchway. Not only did this provide a more direct route for traffic to and from South Wales, the gradient was easier for coal trains to negotiate, and it was perceived that the line would be a boost to what was, at the time of building, the expanding port of Fishguard. This was the GWR's connection with liner departures for the United States of America. 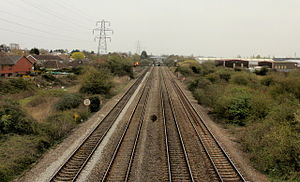 There are four tracks from Severn Tunnel Junction through Newport to Cardiff Central, with two tracks on the remaining sections.[2] Multiple-aspect signals are controlled from several power signal boxes including Swindon, Bristol and two in Cardiff.

A diversionary route exists if the Severn Tunnel is closed. This takes trains from Severn Tunnel Junction to Gloucester, from where they can rejoin the main line either by the Golden Valley Line to Swindon, or the Cross-Country Route and reverse at Bristol Parkway.

If the line is closed between Cardiff Central and Bridgend, an alternative route exists along the Vale of Glamorgan Line.

Half of peak High Speed Trains and most off peak trains continue from Cardiff Central to Swansea, with a few continuing to Carmarthen or in summer, Pembroke Dock.

The local service between Swansea and Cardiff is branded Swanline. The urban network within and surrounding Cardiff, including the Maesteg Line, is referred to as Valley Lines.

Traffic levels on the Great Western Main Line are rising faster than national average, with continued increases predicted. The now defunct Strategic Rail Authority produced a Route Utilisation Strategy for the Great Western Main Line in 2005 to propose ways of meeting this demand, Network Rail plan to implement a new study in 2008. In the meantime, their 2007 Business Plan includes the provision of extra platform capacity at Cardiff Central, Newport and Bristol Parkway, also resignalling and line speed improvements in South Wales, most of which would be delivered in 2010–2014.

Reading railway station is currently undergoing a major redevelopment and there is a proposed future link to Heathrow Airport directly from Reading under the Heathrow Airtrack scheme.

The new Hitachi Super Express trains planned for the Great Western inter-city services will now be predominantly electric units instead of the planned diesel units. However, a proportion of the fleet will be using dual power source electro-diesel bi-mode trains, which will enable services to operate before line electrification is complete. The bi-mode trains will allow inter-city services to operate from London all the way to Carmarthen in the future. The new Super Express trains will bring about an estimated 15% increased capacity during the morning peak hours. Electrification will cut journey times between Swansea and London by an estimated 20 minutes, although electrification will not extend West of Swansea to Carmarthen or Pembroke Dock, and services on the line to Brighton, Portsmouth Harbour and Taunton will continue to be operated by Diesel Trains, as the Bristol to Exeter Line and the Wessex Main Line will not be electrified.[4]