South Wales Police (Welsh: Heddlu De Cymru) is one of the four territorial police forces in Wales. Its headquarters is based in Bridgend.

Covering Wales' capital city, Cardiff, as well as Bridgend, Merthyr Tydfil, Swansea, and the western South Wales Valleys, it is the largest police force in Wales in terms of population, and the seventh largest in the UK.

In February 2014, SWP introduced a requirement that anyone wishing to become a police constable first studies for the certificate in knowledge of policing before applying for the role. SWP is the first force in Wales, and only a handful in the UK to introduce this.

In recent years, special constables have not been recruited although about 100 remain throughout the force. There was a recruitment drive for specials in June 2014.

South Wales Police employ 400 unsworn PCSOs who are posted throughout the force area. They are mostly funded by the Welsh government.

Approximately 1,631 support staff are employed by the force. Their roles vary widely from call handlers to crime scene investigators.

The force was formed as South Wales Constabulary (the name was changed in 1996) on 1 June 1969 by the amalgamation of the former Glamorgan Constabulary, Cardiff City Police, Swansea Borough Police and Merthyr Tydfil Borough Police.[3][4] In 1974, with the re-organisation of local government, the force's area was expanded to cover the newly created Mid Glamorgan, South Glamorgan and West Glamorgan.

In further local government re-organisation in 1996 the force area lost the Rhymney Valley area to Gwent Police. Today it covers the principal areas of Bridgend, Cardiff, Merthyr Tydfil, Neath Port Talbot, Rhondda Cynon Taf, Swansea and the Vale of Glamorgan – most of the ancient county of Glamorgan.

Under proposals made by the Home Secretary on 6 February 2006, the force would have merged with North Wales Police, Gwent Police and Dyfed-Powys Police, to form a single strategic force for all of Wales. This issue caused sharp divisions amongst some members of the police force.[5]

The South Wales Police has participated in the World Police and Fire Games since 1995, except for the 1999 Stockholm Games. The current Chief Constable is Peter Vaughan. 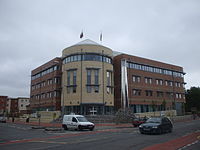 Police stations in each local authority policed by the Force include:[6]

Stations in Canton and Grangetown were closed in 2013 and 2009[8] respectively. Due to a change in the way the public access police services, only Cardiff Bay and Cardiff Central police stations have front desk services.

In November 1988, South Wales Police charged five mixed-race men with the murder of Lynette White, although none of the scientific evidence discovered at the crime scene could be linked to them, and a white male was seen in the vicinity at the time of the murder. On conclusion of the longest murder trial in British history, in November 1990 three of the men were found guilty and sentenced to life imprisonment.

In December 1992 the convictions were ruled unsafe and quashed by the Court of Appeal after it was decided that the police investigating the murder had acted improperly. The wrongful conviction of the three men has been called one of the most egregious miscarriages of justice in recent times. The police claimed that they had done nothing wrong, that the men had been released purely on a technicality of law, and resisted all calls for the case to be reopened.

In 2004 the Independent Police Complaints Commission (IPCC) began a review of the conduct of the police during the original inquiry. Over the next 12 months around 30 people were arrested in connection with the investigation, 19 of whom were serving or retired police officers. In 2007 three of the prosecution witnesses at the original murder trial were convicted of perjury and each jailed for 18 months. In 2009 two further witnesses from the original trial were also charged with perjury. Along with eight former police officers charged with conspiring to pervert the course of justice, they stood trial in 2011.

The trial was the largest police corruption trial in British criminal history and commenced in July 2011. A further four police officers were due to be tried on the same charges in 2012. In November 2011 the case collapsed when the defence submitted that copies of files which they said they should have seen had instead been destroyed. As a result, the judge ruled that the defendants could not receive a fair trial and all 14 were acquitted.

In January 2012 the "destroyed" documents were found, still in the original box in which they had been sent to South Wales Police by the IPCC.[9]