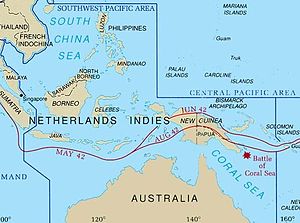 The South West Pacific Area, as defined by the US Joint Chiefs of Staff 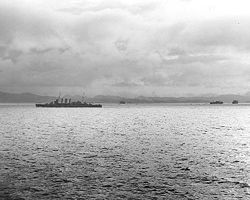 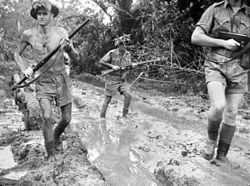 Australian troops at Milne Bay, New Guinea. The Australian army was the first to inflict defeat on the Imperial Japanese Army during World War II at the Battle of Milne Bay of August–September 1942 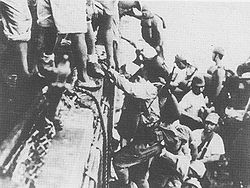 The South West Pacific theatre, during World War II, was a major theatre of the war between the Allies and Japan. It included the Philippines, the Dutch East Indies (except for Sumatra), Borneo, Australia and its mandate Territory of New Guinea (including the Bismarck Archipelago) and the western part of the Solomon Islands. This area was defined by the Allied powers' South West Pacific Area (SWPA) command.

In the South West Pacific theatre, Japanese forces fought primarily against the forces of the United States and Australia. New Zealand, the Netherlands (mainly the Dutch East Indies), the Philippines, United Kingdom, and other Allied nations also contributed forces.

The U.S. General Douglas MacArthur had been in command of the American forces in the Philippines in what was to become the South West Pacific theatre, but was then part of a larger theatre that encompassed the South West Pacific, the South East Asian mainland (including Indochina and Malaya) and the North of Australia, under the short lived American-British-Dutch-Australian Command (ABDACOM). Shortly after the collapse of ABDACOM, supreme command of the South West Pacific theatre passed to MacArthur who was appointed Supreme Allied Commander South West Pacific Area on 30 March 1942.[1][lower-alpha 1] In the other major theatre in the Pacific region, known as the Pacific Ocean theatre, Allied forces were commanded by US Admiral Chester Nimitz. Both MacArthur and Nimitz were overseen by the US Joint Chiefs and the western Allies Combined Chiefs of Staff (CCoS).

Most Japanese forces in the theatre were part of the Southern Expeditionary Army (南方軍 , Nanpo gun?), which was formed on November 6, 1941, under General Hisaichi Terauchi (also known as Count Terauchi). The Nanpo gun was responsible for Imperial Japanese Army (IJA) ground and air units in Southeast Asia and the South Pacific. The Combined Fleet (聯合艦隊, Rengō Kantai?) of the Imperial Japanese Navy (IJN) was responsible for all Japanese warships, naval aviation units and marine infantry units. As the Japanese military did not formally utilize joint/combined staff at the operational level, the command structures/geographical areas of operations of the Nanpo gun and Rengō Kantai overlapped each other and those of the Allies.

Major campaigns in the theatre