The South Western Ambulance Service NHS Foundation Trust (SWASFT) is the organisation responsible for providing ambulance services for the National Health Service (NHS) across South West England (the counties and unitary authorities of Bristol, Bath and North East Somerset, Cornwall, Devon, Dorset, Gloucestershire, North Somerset, the Isles of Scilly, Somerset, South Gloucestershire and Wiltshire).[1] The Foundation Trust was authorised on 1 March 2011 by Monitor (the Independent Regulator for NHS Foundation Trusts) to run the ambulance services run previously by the NHS Trust as a result of the merger of the Westcountry and Dorset ambulance services, and the subsequent merger with neighbouring Great Western Ambulance Service on 1 February 2013. This latter merger was announced in 2011,[2][3] and staff were asked to accept changes in their pay and conditions.[4] 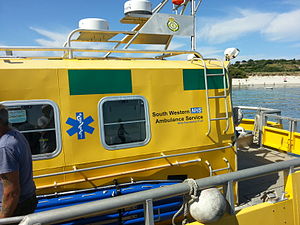 It is one of ten Ambulance Trusts providing England with emergency medical services, receiving government funding for its role. There is no charge to patients for use of the service, although costs will be recovered and paid to the ambulance trust in cases of personal injury through the NHS Injury Cost Recovery scheme.[5]

The Trust has 96 ambulance stations among the counties that it serves: 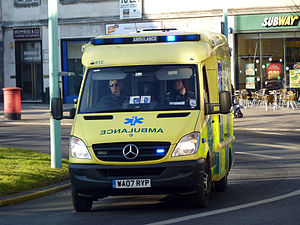 SWAST ambulance on an emergency call

There are currently two stations that co-respond; Thornbury and Portishead. There is also the possibility of expanding to further stations.

The four stations that run as co-responders are Helston, Mullion, St. Keverne, and St. Mawes.

The two stations that run as co-responders are Lyme Regis and Beaminster.[9]

In May 2014 the Trust won a two-year contract to run a doctor-led minor injuries unit at Tiverton District Hospital after North, East and West Devon Clinical Commissioning Group organised a poll in which more than 1,500 residents voted in favour of a 14-hour-a-day doctor-led unit instead of a 24-hour nurse-run service.[10]