The South Western Main Line (SWML) is a major British railway between London Waterloo and Weymouth on the south coast of England. A predominantly passenger line, it serves many commuter areas including suburbs of London such as around Hampton Court Palace and the conurbations based on Southampton and Bournemouth. It runs through Greater London, Surrey, Hampshire and Dorset.

It briefly runs alongside the Windsor and Reading Lines (the "Windsor lines") which terminate also at London Waterloo. It has many branches, including a line to Dorking, the three lines to Guildford one of which proceeds to Portsmouth and the West of England Main Line which spurs off after Basingstoke in Hampshire to terminate officially at Exeter. Together with these, it forms the core of the network built by the London and South Western Railway, today mostly operated by South West Trains. Network Rail refers to it as the South West Mainline.

Much of the line is relatively high-speed, with large stretches cleared for up to 100 mph (160 km/h) running. The London end of the line has as many as eight tracks plus the two Windsor Lines built separately, but this narrows to four south-west of Wimbledon, London and continues this way until Worting Junction west of Basingstoke, from which point most of the line is two tracks. A couple of miles from the Waterloo terminus, the line runs briefly alongside the Brighton Main Line west branch out of London Victoria, including through Clapham Junction – the busiest station in Europe by railway traffic. Tourist special services to a lesser frequency use the line such as the Cathedrals Express and the Alton terminus is a rail connection to a shorter heritage service, the Watercress Line.

The inceptive part of the line in the London Borough of Lambeth was used from 1994 to 2007 by Eurostar trains running out of 'London Waterloo International' requiring trains in this period to have a shoegear to run off the line's third rail DC electrification, following which the Central London terminus for direct European services became St Pancras International.

Several companies had proposed building a faster and heavy goods reliable link from London to the South Coast around Southampton, which would have provided not only a route for commodities and passengers but one for munitions and military personnel in the event of war. At the time, Southampton was smaller than the nearby port of Portsmouth, but since Portsmouth's harbour was already well-developed due to naval operations, Southampton was chosen as it had plenty of space for development.

An engineer had proposed the building of a canal, but this was turned down due to being far too expensive. In 1831, the Southampton, London & Branch Railway and Docks Company was formed, a precursor to the London and South Western Railway. The company planned to build a railway line to Southampton, but were also interested in building a line from halfway down their route towards Bristol via Newbury and Devizes.

The chosen route to Southampton was far from direct, as the route had been directed through Basingstoke, then a small market town, which was where the Bristol line would have diverged from. The route missed major towns such as Guildford and Alton which would have been major revenue sources if the route had been more direct, with Winchester being the only major town on both routes. In addition, the railway was also forced to bypass the town of Kingston-upon-Thames[1] due to local fears that the railway would damage the town's importance for stagecoaches.

The Great Western Railway then proposed a more direct route to Bristol, which passed through several major towns. The GWR received approval first, with the Southampton railway receiving approval shortly afterwards. Despite the Bristol plan being made redundant, the company kept the planned route, though changed its name to the London and Southampton Railway, and later the London and South Western Railway (L&SWR). Throughout the 19th century, the L&SWR and Great Western Railway were often in competition with each other over serving destinations and frequently sought and gained permission to build railways into each other's intended territory.

The first section to be opened was from Nine Elms, the LSWR's first London terminus, in Battersea, to Woking (then named Woking Common) on 21 May 1838.

The remainder of the main line followed over the next two years:

The Southampton and Dorchester Railway

The Southampton and Dorchester Railway was also formed and built a line from 1845 to 1847 from Southampton to Dorchester. It avoided Bournemouth, then barely a village, and ran via Wimborne Minster and Ringwood before reaching Dorchester. The winding route, which followed the easiest-to-construct links rather than linking settlements in a straight line, was known as 'Castleman's Corkscrew' after Charles Castleman, a major figure in the enterprise.[2] The line was originally planned to continue towards Exeter, but this never came into effect. In 1865 the railway was connected to the GWR line to Weymouth, which now forms the current terminus of the line. As Bournemouth was developed as a seaside resort, a line was built to run via Bournemouth, which became the only line. The Ringwood line was closed by the Beeching Axe.

The L&SWR's biggest rival was the Great Western Railway (GWR) who had originally cut the L&SWR's plans by building the line to Bristol. Both companies built several railways from their own networks into each other's intended territory.

In 1848, the GWR built a branch from Reading to Basingstoke. At first this was a fairly quiet railway which terminated at a separate terminus to the L&SWR's mainline station. However, when the rival company adopted standard gauge, a link was constructed between the two lines. This later became used for a freight route from Southampton to the Midlands via Oxford. Following the closure of the Somerset and Dorset Joint Railway, this route became used by long-distance services from Bournemouth to the Midlands.

Another line was built in 1873 southward (Didcot, Newbury and Southampton Railway). Originally, L&SWR ruled out allowing the line to use its own track. However the DN&SR fell into financial difficulties, and earnest negotiations allowed its trains to use the South Western Main Line south of Winchester.

GWR also proposed building a line from Reading to Portsmouth via Basingstoke and Alton but L&SWR found a cheaper solution for building the northern stretch from Basingstoke to Alton by using a light railway. The Basingstoke and Alton Light Railway stopped a rival's Portsmouth line from being built at the all-too-common cost of being, for most of its existence, unprofitable - it saw an eight-year resurrection but again became loss-making and closed in 1932 save for goods. In 1955 similarly the southern stretch, the Meon Valley Railway, closed to passengers.

The main towns served by the route, starting from London, are:

Between London Waterloo and Clapham Junction, the line has as many as eight tracks, with four pairs of tracks. It crosses beneath the Chatham Main Line where the Brighton Main Line runs alongside it on the southern side. At Clapham Junction, some of these tracks leave on the Waterloo to Reading Line and the remaining tracks are reduced to four. The Brighton Line, which also has four tracks, separates from it shortly afterwards.

The four tracks initially have a pair of "slow" tracks to the east with the two "fast" tracks on the western side. This arrangement continues to north of Wimbledon where a flyover transfers the northbound slow line across the fast lines, leaving the inner tracks being used for the fast services and the stopping services using the outer tracks. This arrangement continues to Worting Junction, just after Basingstoke. Many stations on this section had island platforms which have since been removed - this is evident with wide gaps between station platforms as stations such as Winchfield. The island platforms survive at New Malden, Esher and Walton-on-Thames, with the latter now covered in weeds.

The line continues as double-track to Winchester but expands to three tracks through Shawford station with one up platform and fast and slow down platforms. There are four tracks from Shawford to Eastleigh. The line from Romsey via Chandler's Ford trails in just north of Eastleigh which is also the junction for the Fareham line. The line returns to double track until St Denys where the West Coastway Line trails in. At Northam the original route to Southampton Terminus carries on south towards Eastern Docks and the main route curves west to enter a tunnel through to Southampton Central station.

The line remains double-tracked most of the way to Weymouth, but there is a single-track section between Moreton and Dorchester South which constrains capacity.[3] 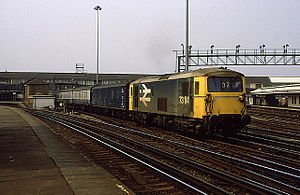 The suburban portion of the line, as far as the Pirbright Junction (for Alton), was electrified (750 V DC third rail) by the London & South Western Railway and its successor, the Southern Railway, prior to World War II.

Electrification was extended to Weymouth in 1988 and saw the introduction of the new BR Class 442 5-WES Wessex Electric trains. These were withdrawn by February 2007; Class 444 5-DES and Class 450 4-DES trains are now used.

There are also many commuter services serving London. Those of note are:

In July 2011, Network Rail in its London & South East Route Utilisation Strategy (RUS) recommended adding a fifth track to the four-track stretch of line between Clapham Junction and Surbiton. This was found to be feasible within the existing land (rail corridor), and was seen as the most practicable way of providing more capacity on the route. It would permit up to eight additional trains to run in the peak hour, for a maximum of 32 trains in this stretch. The scheme would also entail more flexible track use, modifying one Windsor Line track to permit use by mainline trains. Options rejected in the RUS as not viable included double-deck trains, building a flyover at Woking, and introducing 12- or 16-car trains.[7]