The Southall rail crash was an accident on the British railway system that occurred on 19 September 1997, on the Great Western Main Line at Southall, west London, in which an InterCity 125 (also called a High Speed Train) failed to stop at a red (danger) signal and collided with a freight train crossing its path. The incident resulted in 7 deaths and 139 injuries.[1] Great Western Trains were fined £1.5 million for violations of health and safety law in connection with the accident.

As the tracks straightened ahead of the HST train, the driver observed a Class 59 locomotive a mile in distance, moving "at a funny angle" and realised to his horror that it was crossing the Up Main line. The EWS-operated freight train was coming from London on the Down Relief line, hauling twenty empty bogie hopper wagons, and permitted to cross Southall East Junction on its way into Southall Yard, south of the main lines. A collision was now inevitable. The HST was travelling at 125 miles per hour (201 km/h), and could not stop in time even under full braking.

Alan Bricker, the driver of the freight locomotive No. 59101, observed the approaching HST and expected it to stop, but was alarmed at its speed and apparent brake application. In desperation, he tried to accelerate his train out of the path of the HST, but to no avail. The later accident report found that:

Six people were killed, and a seventh passenger died in hospital. [2]

If the AWS equipment on the High Speed Train (HST) passenger train had been working, the chance of the accident occurring would have been highly unlikely, though not completely eliminated, since the AWS is only an advisory system. The driver's attention had been distracted (though no proof was ever discovered) and he did not observe the preceding signals visually, but AWS would have given him a clear audible warning, which would have required him to acknowledge the warning. Failure to acknowledge the warning would have caused the train's brakes to be applied. Automatic Train Protection (ATP) equipment would have almost certainly prevented the accident. The train was fitted with ATP but this was switched off. At the time of the accident, the ATP equipment was not required to be switched on, as it had proved troublesome in service. In addition, not all drivers had been trained on it.[citation needed]

Following this accident and the Ladbroke Grove rail crash, the train operating company First Great Western now requires all its trains to have ATP switched on. If the equipment is faulty the train is taken out of service.

The passenger train driver, Larry Harrison, was initially charged with manslaughter, but the case was dropped. His employer, Great Western Trains, was fined £1.5 million for not having a system to ensure High Speed Trains were not operated for long journeys with AWS inoperative. 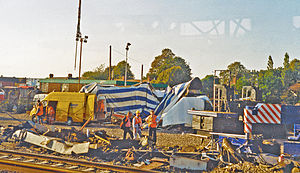 View of the aftermath from a passing train

The action of the signalman in giving the freight train precedence over the HST with the faulty AWS has been criticised. However, this was a perfectly standard and safe manoeuvre, in order to regulate the passage of trains to minimise overall delay; the signaller was not and would not have been required to be aware that the HST's AWS was switched off and would have no expectation that the driver of the passenger train would ignore the signals indicating he should stop. The key point, as identified in the report, was that drivers had become increasingly reliant on AWS with single-manning and high speeds and that it was no longer acceptable to run trains at full speed if the equipment was inoperative. Operating rules were changed accordingly.

Power car 43173 was written off and scrapped at Pig's Bay, having sustained heavy damage during the accident.