Southampton Central railway station is a main line station serving the city of Southampton in Hampshire, southern England. It is on the Wessex Main Line, the South Western Main Line and the West Coastway Line. Despite its name, Southampton Central is in fact situated some distance from the centre of the city (a central area served by Southampton Terminus station until 1967), though it is now the closest station to the centre. 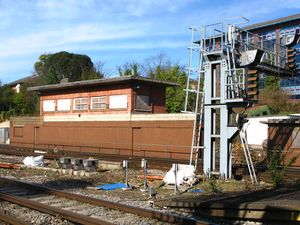 Southampton Central station was opened as Southampton West in 1895, to replace the original Blechynden/West End station (note nearby road namings). As built the station was on the seafront (specifically the stretch of water known as West Bay) with the water reaching right up to the southern edge of the platforms at high tide. A series of land reclamation projects to expand the docks, largely funded by the London and South Western Railway culminated in the building of the vast Western Docks between 1927 and 1934, which led to all of West Bay being reclaimed and the station becoming landlocked. The new land allowed the station to be enlarged and redeveloped in 1934–1935 (from two platforms to four), and became Southampton Central. Soon after the closure of Southampton Terminus station near the docks in 1966, the station was rebuilt in 1967, losing its clocktower, which was replaced with an office block. At this point it was renamed Southampton, although many years later it was once again renamed to Southampton Central.

Southampton Central is to undergo a revamp in the coming years. An £800,000 grant towards a £2.4 million of improvements has been provided by Southampton City Council in late November 2009. Network Rail will place £1.5 million with £475,000 from South West Trains who manages the station. The revamp will focus on an enlargement of the ticket hall, bus timetable displays, gate barriers (set to be upgraded to allow more people pass though the station), and overall facilities. The plan also hopes to improve disabled access to all areas of the station.

It was announced in late 2011 Southampton City Council has plans to re-build the whole station under the Western Gateway project. The project costing £200 million will see a new station with 10 platforms, and over 25,000sq metres of retail and office space. This project is part of the Future Southampton programme, set to be complete by 2025.[2]

Southampton Central was flooded by torrential rainfall on 26 May 2008.[3]

All the platforms are split into two sections, A at the east and B at the west, allowing two services to occupy a platform at the same time or to account for trains dividing into two portions, or attaching to make one train. This happens throughout the day on platforms 2 and 3, and in the peak hours on platforms 1 and 4.

Platforms 1 and 4 are side platforms facing the fast lines. These platforms accommodate CrossCountry's Manchester to Bournemouth services (as well as an extension of the Reading to Newcastle service), Great Western Railway's Cardiff to Portsmouth route and fast services to London Waterloo operated by South West Trains.

There is also an ex-Red Star Parcels bay on the Bournemouth end of Platform 4. Previously branded as Platform 5, stopping services to Brockenhurst used this platform, but the platform can no longer be used for passenger services due to the lack of a proper starting signal. It is now used for the stabling of spare units. A number of goods loops are located a short distance away allowing terminating trains to clear the platforms for through services if required, and also to allow passenger services to pass freight trains.

Southampton Central houses both the South West Trains head office and a British Transport Police station in Overline House on the upside, with street access from Blechynden Terrace.

A partnership between Network Rail, South West Trains and Southampton City Council saw a £3 million pound investment in the refurbishment of the station and improved passenger facilities which was completed at the end of 2011.[4] 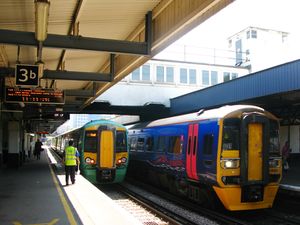 Southampton Central has three trains an hour to London Waterloo of which two take approximately 1 h 20 min and the Poole stopping service taking approximately 1 h and 40 min (this service is overtaken by the express service at Eastleigh).

At the station, South West Trains offer the following in their normal Monday to Friday off-peak service pattern:

Southern offer the following in their normal Monday to Friday off-peak service pattern:

CrossCountry offer the following in their normal Monday to Friday off-peak service pattern:

In December 2008, CrossCountry launched its new timetable with most trains operating between Bournemouth and Manchester Piccadilly, with one service originating at Nottingham and one service on Saturdays terminating at Newcastle.[7] During a short period in the summer, there is also a single service on Saturdays to Leeds. As of December 2010 an hourly CrossCountry train goes runs from Bournemouth to Manchester Piccadilly, via Coventry, calling at Southampton Central. There are also around 6 trains per day in each direction on the Reading to Newcastle route, via Doncaster, which was extended to Southampton Central.

There are also select CrossCountry services to Scotland, many are only for a certain part of the year. They are services to Edinburgh Waverley normally.

The station has a shuttle service that links the station to the city centre and on to Town Quay, for the Isle of Wight Red Funnel and Hythe ferries. This service is operated by Bluestar and departs from the Weymouth (south) side of the station along with Uni-link's U1 service, which runs between the National Oceanography Centre, Southampton and Southampton Airport via the University of Southampton's Highfield Campus. The now defunct City Clipper service also served this side, linking a number of places in Southampton City Centre to the station. This side of the station benefits from a turning circle allowing buses to come in and out.

Bus services operated by Bluestar, First Hampshire & Dorset, Stagecoach in Hampshire and Salisbury Reds use stops on the London (north) side of the station, linking the station to several areas of the city as well as locations including Salisbury, Totton and Romsey.

Taxi ranks are also located on both sides of the station.