Some definitions of southern Europe, also known as Mediterranean Europe, include the countries of the Iberian peninsula (Spain and Portugal), the Italian peninsula, Southern France and Greece.[1] Other definitions sometimes include the Balkan countries of southeast Europe, which are geographically in the southern part of Europe, but which have different historical, political, economic, and cultural backgrounds. 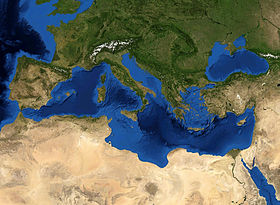 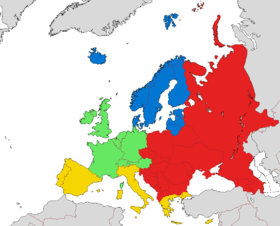 European sub-regions according to EuroVoc (the thesaurus of the European Union). Southern Europe is marked yellow on this map.

Different methods can be used to define southern Europe, including its political, economic, and cultural attributes. Southern Europe can also be defined by its natural features — its geography, climate, and flora.

Geographically, southern Europe is the southern half of the landmass of Europe. This definition is relative, with no clear limits. 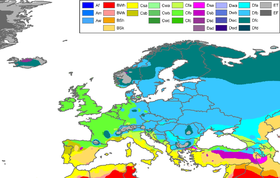 Cooler climates can be found in certain parts of Southern European countries, for example within the mountain ranges of Spain and Italy. Additionally, the north coast of Spain experiences a wetter Atlantic climate. 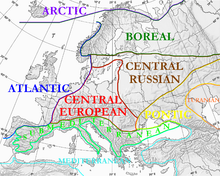 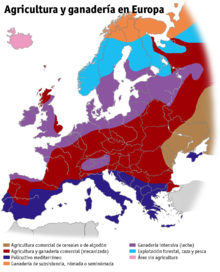 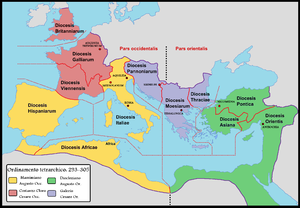 Partition of the Roman Empire.

The period known as classical antiquity began with the rise of the city-states of Ancient Greece. Greek influence reached its zenith under the expansive empire of Alexander the Great, spreading throughout Asia.

During the Middle Ages, the Eastern Roman Empire survived, though modern historians refer to this state as the Byzantine Empire. In Western Europe, Germanic peoples moved into positions of power in the remnants of the former Western Roman Empire and established kingdoms and empires of their own.

The period known as the Crusades, a series of religiously motivated military expeditions originally intended to bring the Levant back into Christian rule, began. Several Crusader states were founded in the eastern Mediterranean. These were all short-lived. The Crusaders would have a profound impact on many parts of Europe. Their Sack of Constantinople in 1204 brought an abrupt end to the Byzantine Empire. Though it would later be re-established, it would never recover its former glory. The Crusaders would establish trade routes that would develop into the Silk Road and open the way for the merchant republics of Genoa and Venice to become major economic powers. The Reconquista, a related movement, worked to reconquer Iberia for Christendom.

The Late Middle Ages represented a period of upheaval in Europe. The epidemic known as the Black Death and an associated famine caused demographic catastrophe in Europe as the population plummeted. Dynastic struggles and wars of conquest kept many of the states of Europe at war for much of the period. In the Balkans, the Ottoman Empire, a Turkish state originating in Anatolia, encroached steadily on former Byzantine lands, culminating in the Fall of Constantinople in 1453.

Beginning roughly in the 14th century in Florence, and later spreading through Europe with the development of the printing press, a Renaissance of knowledge challenged traditional doctrines in science and theology, with the Arabic texts and thought[8] bringing about rediscovery of classical Greek and Roman knowledge.

The Reconquista of Portugal and Spain led to a series of oceanic explorations resulting in the Age of Discovery that established direct links with Africa, the Americas, and Asia, while religious wars continued to be fought in Europe, which ended in 1648 with the Peace of Westphalia. The Spanish crown maintained its hegemony in Europe and was the leading power on the continent until the signing of the Treaty of the Pyrenees, which ended a conflict between Spain and France that had begun during the Thirty Years' War. An unprecedented series of major wars and political revolutions took place around Europe and indeed the world in the period between 1610 and 1700. Observers at the time, and many historians since, have argued that wars caused the revolutions.[9] Galileo Galilei, invented the telescope and the thermometer which allowed him to observe and describe the solar system. Leonardo da Vinci painted the most famous work in the world.[10] Guglielmo Marconi invented the radio.[11]

European overseas expansion led to the rise of colonial empires, producing the Columbian Exchange.[12] The combination of resource inflows from the New World and the Industrial Revolution of Great Britain, allowed a new economy based on manufacturing instead of subsistence agriculture.[13]

The period between 1815 and 1871 saw a large number of revolutionary attempts and independence wars. Balkan nations began to regain independence from the Ottoman Empire. Italy unified into a nation state. The capture of Rome in 1870 ended the Papal temporal power. Rivalry in a scramble for empires spread in what is known as The Age of Empire.

The outbreak of World War I in 1914 was precipitated by the rise of nationalism in Southeastern Europe as the Great Powers took up sides. The Allies defeated the Central Powers in 1918. During the Paris Peace Conference the Big Four imposed their terms in a series of treaties, especially the Treaty of Versailles.

The Nazi regime under Adolf Hitler came to power in 1933, and along with Mussolini's Italy sought to gain control of the continent by the Second World War. Following the Allied victory in the Second World War, Europe was divided by the Iron Curtain. The countries in Southeastern Europe were dominated by the Soviet Union and became communist states. The major non-communist Southern European countries joined a US-led military alliance (NATO) and formed the European Economic Community amongst themselves. The countries in the Soviet sphere of influence joined the military alliance known as the Warsaw Pact and the economic bloc called Comecon. Yugoslavia was neutal.

Italy became a major industrialized country again, due to its post-war economic miracle. The European Union (EU) involved the division of powers, with taxation, health and education handled by the nation states, while the EU had charge of market rules, competition, legal standards and environmentalism. The Soviet economic and political system collapsed, leading to the end of communism in the satellite countries in 1989, and the dissolution of the Soviet Union itself in 1991. As a consequence, Europe's integration deepened, the continent became depolarised, and the European Union expanded to subsequently include many of the formerly communist European countries – Romania and Bulgaria (2007) and Croatia (2013).

The following table shows the languages in Southern Europe that are spoken by at least five million people in the region:

The Hellenic languages or Greek language are widely spoken in Greece and in the Greek part of Cyprus. Additionally, other varieties of Greek are spoken in small communities in parts of other European counties.

English is used as a second language in parts of Southern Europe. As a primary language, however, English has only a small presence in Southern Europe, only in Gibraltar (alongside Spanish) and Malta (secondary to Maltese).

There are other language groupings in Southern Europe. Albanian is spoken in Albania, Kosovo, Macedoonia, and parts of Greece. Maltese is a Semitic language that is the official language of Malta. The Basque language is spoken in the Basque Country, a region in northern Spain and southwestern France.

The following table shows the busiest airports in Southern Europe in 2013. 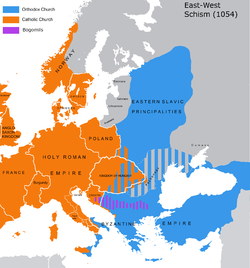 Additionally, there are countries in the eastern part of Southern Europe (e.g., Bosnia, Albania, Turkey), where Islam is widely practiced. 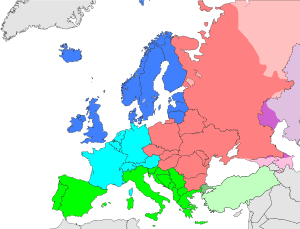 European Travel Commission divides the European region on the basis of Tourism Decision Metrics (TDM) model. Countries which belong to the Southern/Mediterranean Europe are:[31]