Within the area is the art deco Grade II* Southgate tube station designed by Charles Holden. The surrounding roads have a variety of shops and restaurants including an ASDA. The area has several large green parks such as Grovelands Park which covers ninety-two acres and contains a former boating lake of seven acres adjoining dense woods and bracken. In Waterfall Road is Christ Church, a building of stone which has a tower and spire and was built in 1862 by Sir Gilbert Scott. In the grounds stands the Minchenden Oak, said to be the largest oak tree in England, and rumoured to be 800 years old.[2] Across the road from the church lies the Walker Cricket Ground; a regular Middlesex venue which was first used in 1859 and is named after the cricketerJohn Walker.

Southgate tube station on the Piccadilly line is the nearest tube station to most of Southgate's residential area. The other stations are at Oakwood (to the north) or Arnos Grove (to the south west).

Southgate is a cosmopolitan district. It has many prominent families. There has been a prominent Jewish community since early 20th century. There are also many Greek, Turkish and Japanese families living in the district.[3]

Famous people to originate from Southgate include Leigh Hunt, the English essayist and writer, who was born here in 1784, and Frederick Hitch, one of the men awarded a Victoria Cross for the defence of Rorke's Drift in 1879. Another VC winner, Allastair McReady-Diarmid was born there.

Tea magnate Sir Thomas Lipton came to Southgate from Muswell Hill in 1892, and lived in a house called Osidge until his death in 1931.[4]

The author Paul Scott, was born in Southgate and was educated nearby.

Southgate has connections with many people in the arts and showbusiness. The Turner Prize-winning artist Rachel Whiteread was a student at Southgate School. Singers Rachel Stevens from S Club 7 and Amy Winehouse were both born in Southgate and went to Ashmole School (now an academy) on Cecil Road. Winehouse lived on Osidge Lane from 1983 (when she was born) until when she moved to Whetstone in 1991. Winehouse's best friend, singer Juliette Ashby was also born and still resides in Southgate & also attended Osidge JMI School and Ashmole School. The model Kataxenna Kova was also raised in Southgate. Radio presenter Simon Mayo was born in Southgate as was the late Dee Murray, the bass guitarist in the original Elton John Band. The singer Alberto Remedios lived in Southgate before emigrating. The actor Ron Moody lived in Southgate at the Cherry Tree. Husband and wife singing coaches David and Carrie Grant also live in Southgate.

The MP for Southgate, David Burrowes, lives in his constituency, where he was born in nearby Cockfosters. His predecessor, Stephen Twigg, was born and raised in nearby Oakwood. Norman Tebbit, former MP for Chingford and close ally of Margaret Thatcher, was also born in Southgate.

The parliamentary constituency covering the part of Southgate in the London Borough of Enfield is Enfield Southgate (UK Parliament constituency). Until his death in the Brighton bombing in 1984, the constituency was represented by Sir Anthony Berry. In 1997, Michael Portillo, who succeeded Sir Anthony, lost the seat to Stephen Twigg, who after two terms lost in his turn to David Burrowes in May 2005. 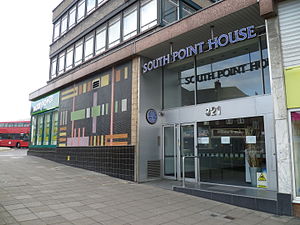 South Point House, where the South Gate once stood.

Southgate was originally the South Gate of Enfield Chase, the King's hunting grounds. This is reflected in the street names Chase Road (which leads due north from the station to Oakwood, and was formerly the avenue into the Chase) and Chase Side. There is a blue plaque on a building on the site of the south gate. A little further to the south was another small medieval settlement called South Street which had grown up around a village green; by 1829 the two settlements had merged and the village green became today's Southgate Green.[6]

Southgate was predominantly developed in the 1930s: largish semi-detached houses were built on the hilly former estates (Walker, Osidge, Monkfrith, etc.) following increased transport development. In 1933, the North Circular Road was completed through Edmonton and Southgate, and also in 1933, the London Underground Piccadilly line was extended from Arnos Grove (where it had reached the previous year), through Southgate tube station, on to Enfield West (now known as Oakwood). This unleashed a building boom, and by 1939 the area had become almost fully developed. 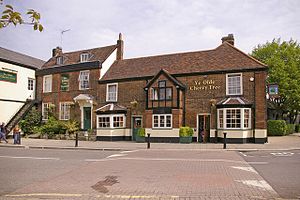 Because of the age of the former village and its position in a ring of villages (the nearby Barnet and Enfield similarly hosting a number of coaching inns) one day's travel by coach from London, Southgate had many pubs: within the village centre there were no fewer than six licensed premises.[7]

Many were located on Chase Side, but in recent times have been mostly replaced by restaurants. The Waggon and Horses closed in 2013, becoming an Anatolian restaurant. The Rising Sun in Chase Side was the terminus for a local horsebus service to Colney Hatch (and there to Kings Cross) before the arrival of the railways, whereupon the service switched to the new station in Palmers Green.[7] It was rebuilt in 1932, and substantially renovated in 2008, changing its name to The Sun. The White Hart is a long-standing pub on Chase Road, near Southgate Circus roundabout.

Opposite the Southgate Club on Chase Side stood The Gate, which was closed in August 1909. The landlord, A. Butcher, took the sign with him to the Fishmonger's Arms in Winchmore Hill Road - which apparently read "This gate hangs well, and hinders none. Refresh and pay - then travel on." While the sign no longer exists, his pub does - rebuilt in the 1930s, the pub owes its name to the nearby ice wells which produced ice for central London fish markets.[8]

In the middle of the 18th century, The Crown (also once known as The Crown Hotel) on Chase Side was a centre of 'much sport'. A caption in a framed picture of a dog discovered by author Herbert W. Newby reads:

Mr. Earl of the 'Crown Inn', Southgate, Nr London, will produce a retriever puppy not over six months old for £10 or £20 that will perform more tricks than any other dog of nine months old in England. He is a beautiful dog, and very large for his age.

The building was originally a wooden two-storey building with a brick gable-end facing the highway. It was rebuilt in 1895 but has since been demolished. The Wetherspoons pub The New Crown occupies a site nearly opposite.

Other notable pubs include Ye Olde Cherry Tree which overlooks Southgate Green to the south of Southgate's main centre, and The Woodman which is on The Bourne.

Main article: List of schools in the London Borough of Enfield

Southgate is home to many cricket teams and grounds, but the best and most well known is that of Southgate CC, who play at the Walker Ground on Waterfall Road. Their ground, named after the famous Walker brothers who set it up and played cricket for Middlesex, is overlooked by a church and many trees. Southgate Adelaide CC, their rival team, also play at the Walker ground

Southgate Hockey Club was based at the Walker Ground from 1890 to 1998, when it relocated to Trent Park.

Grovelands Park, Southgate is the training ground of the football team, Romans AFC.

Saracens used to play at Bramley Road on Chase Side (also known as Clocktower Park and DeBohun Park, being next to DeBohun School). Chase Side is the name of a road between Cockfosters and Southgate). However, they moved to Watford just after the professional era began, and currently reside in Barnet at Copthall Stadium (Allianz Park), Mill Hill.

Saracens Amateurs do, however, still play at the Bramley Road ground and are in the Herts/Middlesex Leagues.

Southgate RFC are based at the Walker ground, sharing with Southgate Cricket, squash and adelaide hockey clubs.

Old Ashmolean RFC are based at Bournside Sports Club, within the grounds of Grovelands Priory. After several years of promotion Old Ashmolean RFC, now in London North West 4, is the highest ranked Rugby Club based in Southgate.

There are five synagogues with Southgate in their name,: Cockfosters and North Southgate, Palmers Green and Southgate Synagogue. These two are part of the United Synagogue, also included, but independent, is the Southgate Ilan 'Bel-Air' Kahlani Synagogue, serving Yemenite Jews of Adeni extraction and other Mizrahi Jews. Chabad Southgate also is included.

Christ Church stands near Southgate Green. This was built on the site of Weld Chapel, which was demolished in 1861. The clock on the church was placed there to celebrate Queen Victoria's diamond jubilee. The church is currently (Jan 2008) undergoing renovation. The Parish Church of St Andrew is on Chase Side. Emmanuel Evangelical Church meets in Ashmole School. The Methodist Church is on The Bourne, near Southgate Underground station. It was built in 1929, replacing a building on Chase Side. It is an active community hub. 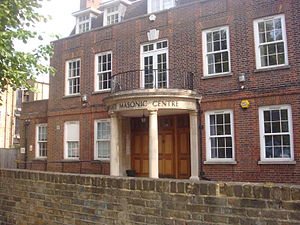 The Southgate Masonic Centre is home to 160 Lodges of which 15 are from Middlesex, along with 5 Chapters. The Centre, a converted church hall, was opened in 1968. The Middlesex Lodges that joined had been meeting in pubs and similar venues and welcomed the opportunity to have their own Centre.