The airport sits on 14,000 acres of land just southeast of Fort Myers, making it the third-largest airport in the United States in terms of land size (after Denver and Dallas/Fort Worth). Though, 6,000 acres of the airports land includes swamp land that has been set aside for environmental mitigation.[1]

In 2014 passengers numbered 7,970,493. The airport is the second busiest single-runway airport in the United States after San Diego International Airport.[2] It is a U.S. Customs and Border Protection port of entry.

LeeTran bus No. 50 serves the airport.

RSW was conceived in 1973 when it was clear that the existing airport in Fort Myers, Page Field, would be too small. The government of Lee County selected a site near Interstate 75, then under construction. Groundbreaking was in 1980, and Southwest Florida Regional Airport opened on schedule, May 14, 1983, with a single 8400-ft runway. Delta Air Lines operated the first flight. The original terminal was located on the north side of the runway at the end of Chamberlin Parkway.

The airport was renamed Southwest Florida International Airport in 1993, though it had hosted international flights since 1984 and U.S. Customs since 1987, mainly for flights to Germany. The name change coincided with the completion of a 55,000 square foot Federal Inspection facility annexed to the original terminal's Concourse A.[3] The runway was also lengthened to 12,000 ft (3,658 m) at the same time to better accommodate international service (making it the fourth-longest runway in Florida).[4] The airport has hosted Boeing 747s (including Air Force One), but as of 2009 the largest aircraft scheduled to RSW are the Airbus A330-200s on Air Berlin non-stop flights to Düsseldorf and seasonally the Boeing 767-300s operated by Delta Air Lines non-stop from Minneapolis/St. Paul and Atlanta .

With the terminal operating at more than double its intended capacity, construction of a new Midfield Terminal Complex began in February 2002. The $438 million terminal opened on September 9, 2005. The terminal, designed by Spillis Candela/DMJM Aviation,[5] has three concourses and 28 gates and can eventually expand to five concourses with 65 gates. Demolition of the former terminal north of the airfield was completed in spring 2006.

A new $16 million Airport Rescue and Fire Fighting facility opened in July 2013. A 9,100 ft (2,800 m) parallel runway is in planning. The project includes a relocated air traffic control tower, apron expansion, crossfield taxiway system, mitigation activities and FPL electrical line relocation. The apron expansion and crossfield taxiway system were completed in late 2013. The entire project is estimated to cost $454 million. Other projects include the Madden Research Loop, a 25-acre (10 ha) project consisting of a research complex for the fields of science, technology and medicine. This project is being developed by Gulf Coast Technology Center, Inc.

Plans are in place for Skyplex – a commercial and industrial park in the location of the old terminal. Other airport-related businesses, such as a hotel, are in the planning stages. A retail gasoline outlet near the airport's entrance opened in June 2014.[6][7]

A direct connection between Interstate 75 and the airport main entrance was completed in early 2015, which allows airport-related traffic to avoid local streets. The airport can now be accessed directly from the freeway at Exit 129.[8] The terminal access road will eventually be expanded to six lanes.[9] 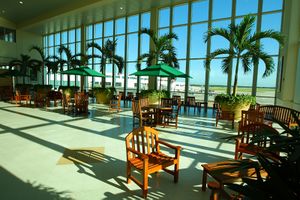 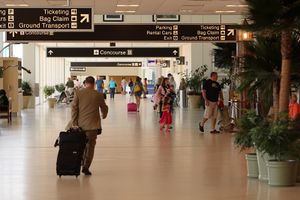 The airport has one terminal with three concourses: Concourse B (Gates B1-B9), Concourse C (Gates C1-C9), and Concourse D (Gates D1-D10). Customs and Immigration services for international flights are located on the lower level of Concourse B. "Concourses A and E" designations have been reserved for the planned future expansion of the terminal.