From Infogalactic: the planetary knowledge core
Jump to: navigation, search
This article is about the Greek food. For the album by Slowdive, see Souvlaki (album). 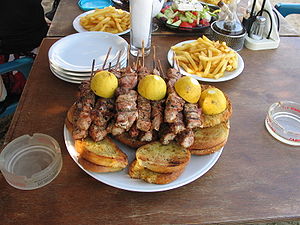 A serving of pork souvlakia with fried garlic bread and lemons 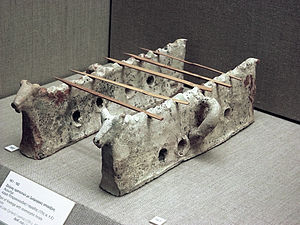 Pair of firedogs with zoomorphic finials, 17th century BC, Akrotiri.

Souvlaki (Greek: σουβλάκι, [suˈvlaci]), plural souvlakia, is a popular Greek fast food consisting of small pieces of meat and sometimes vegetables grilled on a skewer. It is usually served in a pita sandwich with garnishes and sauces, or on a dinner plate, often with fried potatoes. The meat usually used in Greece and Cyprus is pork, although chicken and lamb may also be used. In other countries and for tourists, souvlaki may be made with meats such as lamb, beef, chicken and sometimes fish (especially swordfish).

The word souvlaki is a diminutive of the medieval Greek σούβλα souvla 'skewer', itself borrowed from Latin subula.[1][2]

Excavations in Santorini, Greece, unearthed stone sets of barbecue for skewers used before the 17th century BC. In each pair of the supports, the receptions for the spits are found in absolute equivalence, while the line of small openings in the base formed a mechanism to supply the coals with oxygen so that they remained alight during its use.[3] Mycenaean Greeks used portable tray as grills. These trays were rectangular ceramic pans that sat underneath skewers of meat but it is not clear whether these trays would have been placed directly over a fire or if the pans would have held hot coals like a portable barbecue pit.[4][5] Homer in Ilad (1.465) mentions pieces of meat roasted on spits (οβελός).[6][7][8] In Classical Greece, a small spit or skewer was known as ὀβελίσκος (obeliskos),[9] and Aristophanes mentions such skewers being used to roast thrushes,[10] but there is no direct evidence of chunks of meat being skewered. 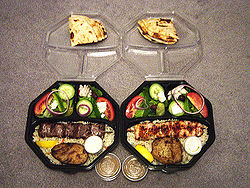 Kalamaki (little reed) is a synonym for souvlaki proper in Athens, in order to differentiate it from other forms of souvlaki.

For kalamaki, the meat is cubed into 1-inch chunks, marinated overnight in lemon juice and olive oil along with Greek herbs and spices such as oregano and on occasion thyme, etc., in a pinch. Then it is skewered on wooden skewers (the "little reeds"), broiled over charcoal, and generously salted and peppered.

The terminology used in Thessaloniki and most parts of northern Greece is different, the word kalamaki is derided since the item is called consistently a souvlaki; a joke suggests that any Athenian or other southerner visiting Thessaloniki asks for a kalamaki will be mockingly given a drinking straw (also called "kalamaki").

Merída means portion. While souvlaki/kalamaki is eaten plain on hand as a fast food, it is also served as a full plate, served with fried potatoes, vegetables, sauce, and quartered pita bread. Usually it consists of the ingredients of a souvlaki-pita (see below), but laid out on a plate, instead of wrapped together for eating on hand.

Pita is a form of partially leavened flat round bread with a diameter of approximately 15 cm, used to wrap souvlaki or gyros. It comes pre-baked and will additionally be grilled on the meat drippings just before serving, unless the customer requests it not to be.

This course consists of souvlaki meat garnished with sliced tomatoes and onions, sauced with tzatziki, and wrapped in a lightly grilled pita. When chicken is used instead of pork meat, tzatziki and onions are replaced with a special sauce and lettuce to be compatible with its taste; Various other garnishes and sauces are possible, including shredded lettuce, paprika, fried potatoes, ketchup, and mustard, though these are considered heretical by purists. In Athens and southern Greece it is called pita-kalamaki. Any of these components may not be included, at the request of the customer. Hungry customers may occasionally request a two-pita wrapping (diplopito) and/or a double meat serving (dikalamo).

A difference between southern and northern Greece is that "souvlaki ap'ola" (souvlaki "with everything") typically includes tzatziki sauce in Athens, unlike Thessaloniki.

Or pitogyro. Similar to souvlaki pita. The souvlaki is replaced by gyros (kebab usually made of pork or chicken). This is also nicknamed souvlaki in common speech due to its resemblance to the above, and because gyros meat is rotated on a mechanical skewer.

In Cyprus, souvlaki refers to the small chunks of meat on a skewer, as well as the whole package of it being wrapped up in bread and salad, etc. A large pita is used, and it has a pocket in the middle so it is not wrapped around the meat and salad. This contains lamb, pork or more recently chicken souvlaki and/or sheftalia, with tomatoes and cucumbers and white cabbage mixed within. Lettuce is rarely added, only for tourists. Raw onion and parsley are very popular with souvlakia in Cyprus, as are pickled green chili peppers. Like all grilled meat dishes in Cyprus, souvlakia are always accompanied by fresh lemon halves or quarters, and plain thick yogurt or tzatziki are also popular accompaniments. The meat is cut into slightly larger chunks in Cyprus, and more ingredients are stuffed into the pita.[citation needed] The portion sizes are normal and "reinforced"-enischimeni. The pita in which souvlakia are served is a little thicker than the flat pita available in other countries.[citation needed]