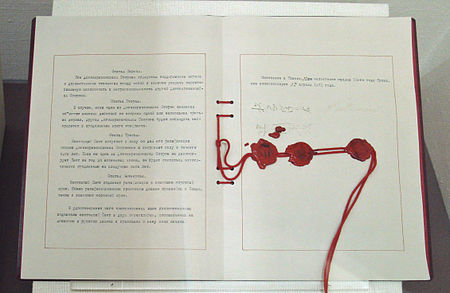 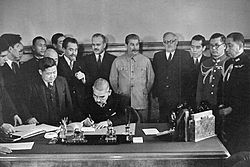 In 1941, with the defeat of France and the subsequent expansion of the Axis Powers, the Soviet Union wished to mend its diplomatic relations in the Far East in order to safeguard its eastern border and concentrate on the European theatre of war. On the other hand, Japan, bogged down in a seemingly interminable war with China and with diplomatic relations with the United States rapidly deteriorating, sought an accommodation with the Soviet Union that would improve its international standing and secure the northern frontier of Manchukuo against possible Soviet invasion.[citation needed]

Stalin was initially unaware of Hitler's briefing to his generals that an attack on the Soviet Union by Germany would enable Japan to challenge the United States overtly, that is because, if such an attack occurred the Soviet Union would be too preoccupied with fighting Germany, thus making Japan feel less threatened or cautious of any possible Soviet invasion of Manchukuo, allowing Japan to have enough provisions and capabilities to start a war with the United States. This treaty Stalin made would allow neither Japan nor the Soviet Union to have to fight in multiple fronts. Stalin believed that his "problems can be solved in a natural way if the Soviets and the Japanese cooperate". After concluding the nonaggression treaty, Stalin, in an unprecedented gesture, saw Foreign Minister Yosuke Matsuoka off at the train station. This was symbolic of the importance Stalin attached to the treaty; it also provided him with the occasion – in the presence of the entire diplomatic corps – to invite negotiations with Germany while flaunting his increased bargaining power.[1]

The treaty[2] was signed in Moscow on April 13, 1941, by Foreign Minister Yosuke Matsuoka and Ambassador Yoshitsugu Tatekawa for Japan and Foreign Minister Vyacheslav Mikhailovich Molotov for the Soviet Union.

On the same day, the same people also signed a declaration regarding Mongolia and Manchuria.[3] The Soviet Union pledged to respect the territorial integrity and inviolability of Manchukuo, while Japan did the same for the Mongolian People's Republic.

Later, in 1941, Japan, as a signatory of the Tripartite Pact, considered denouncing the Soviet–Japanese Neutrality Pact, especially after Nazi Germany invaded the Soviet Union (Operation Barbarossa), but made the crucial decision to keep it and to expand southwards invading the European colonies in Southeast Asia instead.

On August 9, 1945, just after midnight, the Soviet Union invaded Manchuria. The declaration of war followed nearly six hours later. Since the time zone difference of 7 hours, the declaration of war could be still dated August 8, 1945, being handed in Moscow at 11 p.m.[7]

The Soviet Union kept its promise to the Allies at the Yalta Conference to enter the war with Japan two to three months after the end of World War II in Europe, but it also acted in violation of the still valid neutrality pact signed on April 13, 1941.

The Presidium of the Supreme Soviet of the Union of Soviet Socialist Republics and His Majesty the Emperor of Japan, guided by a desire to strengthen peaceful and friendly relations between the two countries, have decided to conclude a pact on neutrality, for which purpose they have appointed as their Representatives:

who, after an exchange of their credentials, which were found in due and proper form, have agreed on the following:

In confirmation whereof the above-named Representatives have signed the present Pact in two copies, drawn up in the Russian and Japanese languages, and affixed thereto their seals.

On behalf of the Government of the U.S.S.R.
V. MOLOTOV

On behalf of the Government of Japan
YOSUKE MATSUOKA
YOSHITSUGU TATEKAWA

Soviet Denunciation of the Pact with Japan[4]

The American Ambassador at Moscow transmitted to the Secretary of State, by a telegram dated April 5, 1945, the following statement, as received from the press section of the Foreign Office, regarding Soviet denunciation of the U.S.S.R.-Japanese neutrality pact:

" Today at 3 p.m. People's Commissar for Foreign Affairs of the USSR Mr. V. M. Molotov, received the Japanese Ambassador, Mr. N. Sato, and made the following statement to him in the name of the Soviet Government:

'The neutrality pact between the Soviet Union and Japan was concluded on April 13, 1941, that is, before the attack of Germany on the USSR and before the outbreak of war between Japan on the one hand and England and the United States on the other. Since that time the situation has been basically altered. Germany has attacked the USSR, and Japan, ally of Germany, is aiding the latter in its war against the USSR. Furthermore Japan is waging a war with the USA and England, which are allies of the Soviet Union.

In these circumstances the neutrality pact between Japan and the USSR has lost its sense, and the prolongation of that pact has become impossible.

On the strength of the above and in accordance with Article Three of the above mentioned pact, which envisaged the right of denunciation one year before the lapse of the five-year period of operation of the pact, the Soviet Government hereby makes know [sic] to the Government of Japan its wish to denounce the pact of April 13, 1941.'

Soviet Declaration of War on Japan[8]

"On Aug. 8, People's Commissar for Foreign Affairs of the U.S.S.R. Molotov received the Japanese Ambassador, Mr. Sato, and gave him, on behalf of the Soviet Government, the following for transmission to the Japanese Government:

'After the defeat and capitulation of Hitlerite Germany, Japan became the only great power that still stood for the continuation of the war.

The demand of the three powers, the United States, Great Britain and China, on July 26 for the unconditional surrender of the Japanese armed forces was rejected by Japan, and thus the proposal of the Japanese Government to the Soviet Union on mediation in the war in the Far East loses all basis.

Taking into consideration the refusal of Japan to capitulate, the Allies submitted to the Soviet Government a proposal to join the war against Japanese aggression and thus shorten the duration of the war, reduce the number of victims and facilitate the speedy restoration of universal peace.

Loyal to its Allied duty, the Soviet Government has accepted the proposals of the Allies and has joined in the declaration of the Allied powers of July 26.

The Soviet Government considers that this policy is the only means able to bring peace nearer, free the people from further sacrifice and suffering and give the Japanese people the possibility of avoiding the dangers and destruction suffered by Germany after her refusal to capitulate unconditionally.