The Soviet–Japanese border conflicts (also known was the Soviet-Japanese Border War) was a series of battles and skirmishes between the forces of the Union of Soviet Socialist Republics and the Empire of Japan, as well as their puppet states of Mongolia and Manchukuo. Lasting from 1935 to 1939, most of the conflicts were small border skirmishes until May 1939, with the notable exception of the Battle of Lake Khasan. The Border War was resolved in a series of engagements at Khalkin-Gol, where the Soviets inflicted a decisive defeat on the Japanese. This resulted in the Soviet-Japanese Neutrality Pact. It should not be confused with the conflict in August 1945 when the Soviet Union declared war in support of the other Allies of World War II and launched the Manchurian Strategic Offensive Operation.

Before the Japanese occupation of Outer Manchuria, the Soviet Union had also engaged in a conflict with China in the region.

Following the Japanese invasion of Manchuria in 1931, violations of the vaguely defined Manchukuo-Mongolia-USSR border were frequent. Most of these were misunderstandings, but some were intentional acts of espionage. According to the IJA, between 1932 and 1934, 152 border disputes occurred, largely because the Soviets found it necessary to gather intelligence inside Manchuria. For their part, the Soviets blamed the Japanese for 15 cases of border violation, 6 air intrusions, and 20 episodes of "spy smuggling" in 1933 alone.[1] Hundreds more violations were reported by both sides throughout the following years. To make matters worse, Soviet-Japanese diplomacy and trust had declined even further in these years, with the Japanese being openly called "fascist enemies" at the Seventh Comintern Congress in July 1935.[2]

As early as 1935, the Soviets were providing ammunition and intelligence to Communist guerillas in Manchuria.[3] In 1937, the Japanese invaded China, starting the Second Sino-Japanese War. During the first two years of the war, the Soviets heavily aided the Chinese, increasing tensions with Japan. From October 1937 to September 1939, the Soviets supplied the Chinese with 82 tanks, over 1,300 pieces of artillery, over 14,000 machine guns, 50,000 rifles, 1,550 trucks and tractors, and also ammunition, equipment and supplies. They also provided 3,665 military advisors and "volunteers". 195 of these men, almost all officers, died in battle against Japanese forces. Large-scale aid ceased by the end of the Soviet-Japanese border wars.[4]

In early 1935, the first shooting affray took place. From then until April 1939, the Imperial Japanese Army recorded 108 such incidents.[5]

In January 1935, the first armed clash, Halhamiao incident (哈爾哈廟事件, Haruhabyō jiken?) occurred on the border between Mongolia and Manchukuo.[6] Several dozen Mongolian cavalry trespassed in Manchuria near some disputed fishing grounds, and engaged an 11-man Manchukuo army patrol unit near the Buddhist temple at Halhamiao, which was led by a Japanese military advisor. The Manchukuo Army incurred slight casualties, suffering 6 wounded and 2 dead, including the Japanese officer. The Mongols suffered no casualties, and withdrew when the Japanese sent a punitive expedition to reclaim the disputed area. Two motorized cavalry companies, a machine gun company, and a tankette platoon were sent and occupied the point for three weeks without resistance.[7]

In June 1935, the Japanese and Soviets directly exchanged fire for the first time. West of Lake Khanka, an 11-man Japanese patrol was attacked by 6 Soviet horsemen, supposedly inside Manchukuoan territory. In the ensuring firefight, one Soviet soldier was killed, and two horses were captured. While the Japanese asked the Soviets for a joint investigation of the issue, the Soviets rejected the request.

In October 1935, 9 Japanese and 32 Manchukuoan border guards were engaged in setting up a post, about 20 kilometers north of Suifenho, when they were attacked by a force of 50 Soviet soldiers. The Soviets opened fire on them with rifles and 5 heavy machine guns. In the ensuing clash, 2 Japanese and 4 Manchukuoan soldiers were killed, and another 5 were wounded. The Manchukuoan foreign affairs representative lodged a verbal protest with the Soviet consul at Suifenho. The Kwantung Army also sent an intelligence officer to investigate the scene of the clash.[3]

On 19 December 1935, a Manchukuoan army unit engaging in a reconnoitering project southwest of Buir Lake clashed with a Mongolian party, reportedly capturing 10 soldiers. Five days later, 60 truck-borne Mongolian troops assaulted the Manchukuoans and were repulsed, at the cost of 3 Manchukuoan dead. The same day, at Brunders, Mongolian soldiers attempted to drive out Manchukuoan forces three times in the day, and then again at a night. All attempts failed. More small attempts to dislodge the Manchukuoans from their outposts occurred in January, with the Mongolians this time utilizing planes for recon duty. Due to the arrival of a small force of Japanese troops in three trucks, these attempts also failed with a few casualties on both sides. Aside from the 10 prisoners taken, Mongolian casualties during these clashes are unknown.[8]

In February 1936, Lt. Col. Sugimoto Yasuo was ordered to form a detachment from the 14th Cavalry Regiment and, in the words of Lt. Gen Kasai Heijuro, "out the Outer Mongol intruders from the Olankhuduk region". Sugimoto's detachment included cavalry guns, heavy machine guns, and tankettes. Arrayed against him were 140 Mongolians, equipped with heavy machine guns and light artillery. On February 12, Sugimoto's men successfully drove the Mongolians south, at the cost of 8 men killed, 4 men wounded, and 1 tankette destroyed. After this, they began to withdraw, but were attacked by 5-6 Mongolian armored cars and 2 bombers, which briefly wreacked havok on a Japanese column. This was rectified when the unit obtained artillery support, enabling it to destroy or drive off the armored cars.[8]

In March 1936, the Tauran incident (タウラン事件, Tauran jiken?) (ja) occurred. In this battle, both the Japanese Army and Mongolian Army used a small number of armored fighting vehicles and military aircraft. The Tauran incident of March 1936 occurred as the result of 100 Mongolian and 6 Soviet troops attacking and occupying the disputed village of Tauran, Mongolia, driving off the small Manchurian garrison in the process. They were supported by a handful of light bombers and armored cars, though their bombing sorties failed to inflict any damage on the Japanese, and three of them were shot down by Japanese heavy machine guns. Local Japanese forces counter-attacked, running dozens of bombing sorties on the village, and eventually assaulting it with 400 men and 10 tankettes. The result was a Mongolian rout, with 56 soldiers being killed, including 3 Soviet advisors, and an unknown number being wounded. Japanese losses amounted to 27 killed and 9 wounded.[9]

Later in March 1936, there was another border clash, this time between the Japanese and the Soviets. Reports of border violations led the Korea Army to send ten men by truck to investigate, but this party itself was ambushed by 20 NKVD soldiers deployed at a point 300 meters inside the territory claimed by the Japanese. After incurring several casualties, the IJA patrol withdrew, and brought up 100 men within hours as reinforcements, who then drove off the Soviets. However, fighting erupted later in the day when the NKVD also brought reinforcements. By nightfall, the fighting had stopped and both sides had pulled back. The Soviets agreed to return the bodies of 2 Japanese soldiers who died in the fighting, which was seen as encouraging by the Japanese government.[10]

In early April 1936, three Japanese soldiers were killed near Suifenho, in one of many minor and barely-documented affrays. However, this incident was notable in that the Soviets again returned the bodies of the dead IJA servicemen.

In June 1937, the Kanchazu Island incident (乾岔子島事件, Kanchazutou jiken?) (ja) occurred on the Amur River (Soviet–Manchukuo border). Three Soviet gunboats crossed the center line of the river, unloaded troops, and occupied Kanchazu (also spelled "Kanchatzu") island. Soldiers from the IJA 1st Division, using two horse-drawn 37mm artillery pieces, proceeded to hastily set up improvised firing sites, and load their guns with both high-explosive and armor-piercing shells. They shelled the Soviets, sinking the lead gunboat, crippling the second, and driving off the third. Japanese troops then fired on the swimming crewmen of the sunken ships with machine guns. 37 Soviet soldiers were killed in this incident; the Japanese forces suffered no casualties.[11] The Japanese Ministry of Foreign Affairs protested and demanded the Soviet soldiers withdraw from the island. The Soviet leadership, apparently shocked by the display and not wanting things to escalate, agreed and evacuated their forces.[11]

The Battle of Lake Khasan (July 29, 1938 – August 11, 1938) and also known as the Changkufeng Incident (Chinese: 张鼓峰事件; pinyin: Zhānggǔfēng Shìjiàn, Japanese pronunciation: Chōkohō Jiken) in China and Japan, was an attempted military incursion from Manchukuo (by the Japanese) into territory claimed by the Soviet Union. This incursion was founded in the belief of the Japanese side that the Soviet Union misinterpreted the demarcation of the boundary based on the Convention of Peking treaty between Imperial Russia and the former Qing-Dynasty China (and subsequent supplementary agreements on demarcation), and furthermore, that the demarcation markers had been tampered with. The Japanese 19th division expelled a Soviet garrison from the disputed area, and repulsed numerous counterattacks by an overwhelmingly more numerous and heavily armed Soviet force. Both sides took heavy losses, though Soviet casualties were nearly three times higher than Japanese casualties, and they lost dozens of tanks. The conflict was resolved diplomatically on August 10, when the Japanese ambassador in Moscow asked for peace. The Japanese troops withdrew the next day, and the Soviets again occupied the now-empty area. 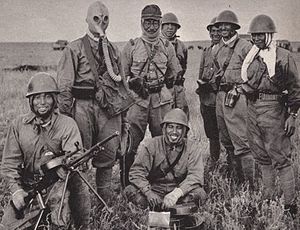 The Battle of Khalkhin Gol, sometimes spelled Halhin Gol or Khalkin Gol after the Halha River passing through the battlefield and known in Japan as the Nomonhan Incident (after a nearby village on the border between Mongolia and Manchuria), was the decisive battle of the undeclared Soviet–Japanese Border War. After a series of skirmishes in May and June, the incident escalated into a series of engagements where both sides deployed corps-sized forces, though the Soviets were again far more numerous and heavily armed than the Japanese. In a series of battles in July and August, the Soviets defeated the Japanese, despite suffering far heavier casualties, and expelled them from Mongolia.

As a result of the Japanese defeat at Khalkhin Gol, Japan and the Soviet Union signed the Soviet–Japanese Neutrality Pact on 13 April 1941 (similar to the German–Soviet non-aggression pact).[12]

Later in 1941, Japan would consider breaking the pact when the German Third Reich invaded the Soviet Union (Operation Barbarossa), but they made the crucial decision to keep it and to continue to press into Southeast Asia instead. This was said to be largely due to the Battle of Khalkhin Gol. The defeat there caused Japan not to join forces with Germany against the Soviet Union, even though Japan and Germany were part of the Tripartite Pact. On April 5, 1945, the Soviet Union unilaterally denounced the neutrality pact, noting that it would not renew the treaty when it expired on April 13, 1946. Four months later, prior to the expiration of the neutrality pact, and between the atomic bombings of Hiroshima and Nagasaki, the Soviet Union declared war on Japan, completely surprising the Japanese. The Soviet invasion of Manchuria was launched one hour after the declaration of war.

The fighting early in World War II between Japan and the Soviet Union plays a key part in the Korean film My Way, in which Japanese soldiers (including Koreans in Japanese service) fight and are captured by the Soviets and forced to fight for them.