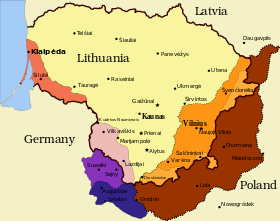 The Soviet–Lithuanian Peace Treaty, also known as the Moscow Peace Treaty, was signed between Lithuania and Soviet Russia on July 12, 1920. In exchange for Lithuania's neutrality and permission to freely move its troops in the recognized territory during its war against Poland, Soviet Russia recognized the sovereignty of Lithuania. The treaty was a major milestone in Lithuania's struggle for international recognition. It also recognized Lithuania's eastern borders. Interwar Lithuania officially maintained that its de jure borders were those delineated by the treaty despite the fact that a large territory, the Vilnius Region, was in fact controlled by Poland.

Ratification documents were exchanged in Moscow on October 14, 1920. The treaty was registered in the League of Nations Treaty Series on March 8, 1921.[2]

Lithuania declared independence from the former Russian Empire on February 16, 1918. In March the Bolsheviks signed the Treaty of Brest-Litovsk and renounced any claims to the Baltic states, including Lithuania. Ober Ost, the German occupying authority, did not allow Lithuania to establish government institutions, organize military or police forces, or attempt to define its borders. Lithuanian independence remained a largely unrealized political declaration. That changed when Germany surrendered in November 1918. Lithuanians hurriedly adopted a provisional constitution, formed a government, and started organizing an army.

Soviet Russia denounced the Treaty of Brest-Litovsk and renewed its interest in the Baltic region. In late December 1918, Lithuanian territory was invaded by Bolshevik forces, pursuing the retreating Germans. That marked the beginning of the Lithuanian Wars of Independence and the Polish–Soviet War. Within a month Soviet forces controlled large portions of northern and eastern Lithuania. The advance was stopped only with help from German volunteers. In Vilnius, the Bolsheviks proclaimed a puppet Soviet government, led by Vincas Mickevičius-Kapsukas. In February 1919 the Lithuanian SSR was merged with the Byelorussian SSR, to form Litbel.[3] The entity was short-lived as Poland and Lithuania successfully counterattacked. Vilnius, the historic capital of Lithuania, was seized by the Poles in April. The last Bolsheviks were pushed from Lithuanian territory at the end of August.[4] The entire territory of Litbel was taken by September 1919 and it ceased to exist.[3]

As the Bolsheviks were pushed from the Baltic region, Lenin sought to arrange peace treaties to ease anti-Bolshevik tensions in Europe.[4] The first Lithuanian–Russian attempt at negotiation took place on September 11, 1919, after the People's Commissar of Foreign Affairs of Soviet Russia, Georgy Chicherin, sent a note with a proposal for a peace treaty. It was a de facto recognition of the Lithuanian state.[5] Similar proposals were delivered to Latvia and Estonia. On September 14 and September 15, 1919, the Baltic states held a trilateral meeting in Tallinn and agreed to begin simultaneous peace talks with the Soviets.[6]

However, Lithuania delayed contacting Moscow and the collective negotiations did not take place.[6] Lithuanian feared that negotiations with communist Russia, which was isolated from European politics, would damage its relationships with the western powers that had not yet recognized Lithuania.[6] While Lithuania was preparing for the first democratic elections to the Constituent Assembly of Lithuania, election campaigns urged the government to start negotiations.[6] On March 31, 1920 Augustinas Voldemaras, Lithuania's Minister of Foreign Affairs, informed Soviet diplomats that Lithuania was ready to open the talks on condition that Moscow recognized Lithuania within its ethnic lands and acknowledged that Vilnius was its capital.[7] The Soviets agreed to discuss the situation and suggested that preliminary negotiations begin on April 15. The talks in Moscow did not begin until May 7.

The Lithuanian delegation, led by Tomas Naruševičius, demanded that Russia recognize independent Lithuania as a legal successor of the Grand Duchy of Lithuania, while the Soviet delegation, led by Adolph Joffe, was prepared to recognize Lithuania only based on the self-determination principle.[8] Territorial disputes were the most contentious issue. Lithuania demanded the territories of former Kovno, Vilna, Grodno, and Suwałki Governorates.[8] These areas, according to the Lithuanians, were ethnically Lithuanian. M. Balinsky's census of 1857 was provided as evidence that the territory was inhabited primarily by Lithuanians. Lithuanians asserted that the Jewish and Belarusian populations in the region, which were large, wished to be part of Lithuania. They brought a representative of each group, Simon Rosenbaum and Dominyk Semashko, to support this case.[8] It was agreed that the territory of Lithuania could be easily identified, as it was inhabited by Litvaks.[5] The Second Polish Republic also laid claim to this territory and had actual control over it at the time.

The Soviets agreed to recognize the territory to Lithuania if it agreed to form a military alliance against Poland, which was engaged in the Kiev Offensive against the Soviet Russia.[8] The Lithuanians were tempted by the opportunity to regain Vilnius, but refused. Even though the Soviets seemed a natural ally against Poland, Lithuanians reasoned that staying on good terms with Poland and its allies, France and Great Britain, was a better long-term strategy.[8] Lithuania informed Britain about Soviet plans. They hoped such a move would prove Lithuania's trustworthiness and would put indirect pressure on Poland to reach an acceptable agreement in regards to Vilnius.[8] These tactics did not prove successful, as Poland was invariably backed by France and indirect British pressure was not strong enough to change Poland's foreign policy.[8]

The negotiations were long and difficult. While the Russians were losing ground to the Poles, who took Kiev in May 1920, the Lithuanians sought to delay the talks. On May 22, 1920, the Lithuanian delegation even threatened to withdraw from the peace talks. However, as the situation changed and Russia successfully counterattacked, the Lithuanians were pressured into signing the treaty on July 12.[6] After some debate over whether the treaty was sincere, and whether the Soviets had assumed any real liability, the Constituent Assembly of Lithuania ratified it on August 8, 1920.

The treaty had 19 articles. Article 1 stipulated that Russia recognized Lithuania's independence without reservations and voluntarily abandoned any territorial claims.[9] Article 2 described Lithuanian territory. The Soviet Union acknowledged Lithuanian authority over the Vilnius Region, including Brasłaŭ, Hrodna, Lida, Pastavy and Vilnius. The fate of the Suvalkai Region was not determined by the treaty as the line was drawn only to the village of Sztabin. The Bolsheviks also promised to pay war reparations in the amount of three million rubles and 107,000 hectares of timber.[9] Lithuania was relieved of any debt obligations.

The treaty allowed refugees and prisoners of war to return to their homeland. At the time, Lithuania held about 2,000 Russian prisoners, while Russia held about 150 Lithuanians.[8] Russians in Lithuania could opt for either Lithuanian or Russian citizenship.[9] Russia promised to return any cultural and historical property removed during the wars. A working commission was created which evaluated the damage to Lithuania at about 816 million rubles, and 407 million rubles for damage to the territory then controlled by Poland. Separate agreements would be made later to decide protection of the frontier, conventions of trade and transit, and other details.[9]

The treaty also contained a secret clause allowing Soviet forces unrestricted movement within Soviet-recognized Lithuanian territory for the duration of Soviet hostilities with Poland; this clause would lead to questions regarding the issue of Lithuanian neutrality in the ongoing Polish-Soviet War.[10][11]

While the treaty was being negotiated and signed, most of the territory by the treaty granted to Lithuania was already controlled by Bolshevik forces.[5] As the Poles were retreating from western Russia, Lithuania attempted to secure the borders outlined in the treaty. Lithuanian forces crossed the Foch line on July 19, seeking to take control of the territories granted to Lithuania by the Soviet Union, advancing rapidly despite Polish protests, and in several cases fighting skirmishes with retreating Polish forces.[11] This led to clashes in southern Lithuania over the towns of Sejny, Augustów, and Suwałki.[13] According to historian Piotr Lossowski, the Lithuanians also provided the Soviets with logistical support.[11]

The Bolshevik forces were the first to enter Vilnius on July 14, 1920, and despite the treaty did not intend to transfer it to the Lithuanians.[14] The Soviets installed a puppet government, the former Litbel, with the intent of fomenting a socialist revolution. Leon Trotsky and Mikhail Tukhachevsky were making preparations to overthrow the Lithuanian government.[10] The plans never came to pass as Poland defeated Soviet forces in the Battle of Warsaw between August 13 and August 25.[15] On August 26, as the Polish Army was approaching the southern borders of Lithuania, the Soviets finally transferred Vilnius to Lithuanian control and the Red Army retreated.

During September, when the Poles had gained an upper hand and were pursuing the Soviets back to the east, Soviet forces moved through Lithuanian-controlled territory at will, but Polish forces that tried to pursue them were arrested and interned.[11] Lithuania's declared neutrality was challenged by Poland, which accused Lithuania of allowing free Soviet passage through its territory. Lithuania could not deny this.[14] The treaty did not create a formal military alliance between the Soviets and Lithuanians, but diminished Lithuania's standing as a neutral state.[8][11] Łossowski has written that Lithuania's lack of neutrality towards Poland was such that "the Polish government could have with full justification treated Lithuania as a country participating in the war on the other side, with all of its political and legal implications."[11] Historian Alfred E. Senn wrote that "the Lithuanians cannot claim to have been 'strictly neutral'", and that "the Lithuanians should not have been surprised when, at the end of August, Warsaw refused to recognize Kaunas's neutrality."[16]

In late August Lithuanian and Polish missions met in Kaunas to negotiate the situation. While the talks were underway, Polish troops retook Sejny, Augustów, and Suwałki in the south.[14] The Suwałki Region held great symbolic importance for Lithuanians as a locus of their independence movement.[17] Lithuania mounted military operations in the area. Poland also wanted to reclaim Vilnius, which it had been forced to abandon during the Soviet offensive in July. These clashes led to a war on a wide front between Poland and Lithuania in September.[13][14] An intervention was made by the League of Nations, which brokered the Suwałki Agreement on October 7, 1920; it was to have taken effect on October 10. However, on October 9, Polish General Lucjan Żeligowski staged a mutiny, invaded Lithuania, and took over Vilnius. Most of the Vilnius and Suwałki Regions would remain under Polish control during the interwar period, and Polish–Lithuanian relations during that time were described as "no war, no peace."[18]

The treaty represented a major breakthrough in the Lithuanian Republic's quest for international recognition. The provision that permitted the return of Lithuanian World War I refugees and prisoners was a welcomed development. However, the Soviet Union did not pay all its reparations and never seriously considered returning cultural and historical property.[9] Lithuanian politicians and historians continue to seek the return of those items, but the Russian government claims that they are lost.

Modern Belarusian historiography regards the treaty, especially the cession of ethnic Belarusian territories to Lithuania (primarily Hrodna, Shchuchyn, Lida, Ashmyany, Smarhon, Pastavy, Braslaw, but also the contemporary Vilnius Region with Vilna) as a unilateral act by the Soviet authorities that disregarded the national interests of the Belarusian people, aimed at immediate military and political gains.[19]

Some historians have asserted that if Poland had not prevailed in the Polish–Soviet War, Lithuania would have been invaded by the Soviets, and would never have experienced two decades of independence.[20] Despite the Soviet–Lithuanian Peace Treaty, Lithuania was very close to being invaded by the Soviets in summer 1920 and being forcibly incorporated into that state, and only the Polish victory derailed this plan.[20]