From Infogalactic: the planetary knowledge core
Jump to: navigation, search
"Coupe du Roi" redirects here. It is not to be confused with Copa del Rey (disambiguation) or King's Cup (disambiguation).

The Total 24 Hours of Spa is an endurance racing event held annually in Belgium since 1923 at the Circuit de Spa-Francorchamps. It is currently sponsored by Total S.A.. 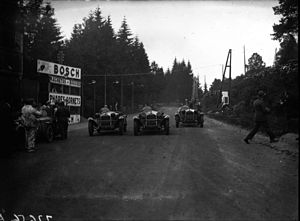 Alfa Romeos after triple win in 1930

The Spa 24 Hours was conceived by Jules de Their and Henri Langlois Van Ophem just one year after the inaugural 24 Hours of Le Mans was run. It debuted in 1924 over a 15 kilometres (9.3 mi) circuit on public roads between the towns of Francorchamps, Malmedy and Stavelot, under the auspices of the Royal Automobile Club Belgium (RACB). The present 7.004 kilometres (4.352 mi) circuit was inaugurated in 1979.

Cars entered have spanned from the Russian Moskvitch and models with sub-1 liter engines such as the NSU Prinz TT to the luxurious V8-powered Mercedes-Benz 300 SEL 6.3. Tuned by Mercedes-AMG, the 6834 cc and 420 hp (313 kW) so-called "Red pig" finished as high as second in 1971.

With the participation of Swiss Lilian Bryner on the victorious Ferrari 550 of the BMS Scuderia Italia team, the 2004 race marked the first time in history that a female driver was part the winning team of a 24-hour endurance race in a Gran Turismo with more than 500 hp (370 kW).

The best manufacturer wins the Coupe du Roi (King's Cup), which is not necessarily the race winners. The cup is won by the manufacturer with the most points, accrued by cars that are made by the same manufacturer.[1]

Results on the 15km track 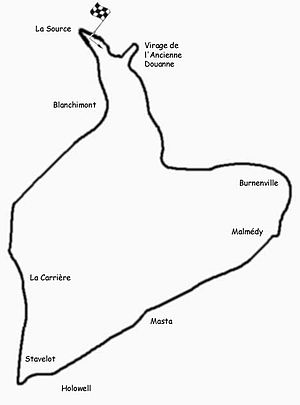 Results on the 14km track 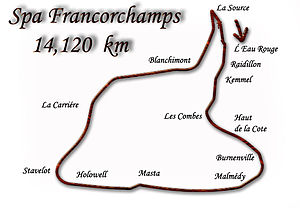 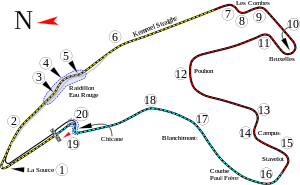 The current version of the Spa 24 Hours is an event under the Blancpain Endurance Series calendar, although it was previously run as part of the FIA GT Championship featuring GT1 and GT2 machinery, and by various touring car series. Currently, the cars run fall under the FIA GT3 and GT3 Cup classifications.